10 Best Airports in the Philippines That Are Truly World-Class

Airports in the Philippines go through a lot of development to welcome travellers warmly, especially since the world is gradually opening to tourism. Most of these terminals are constantly upgrading their facilities and amenities to further extend hospitality to tourists arriving in their city. Along with the aesthetic glow-ups that they go through, these airports are out to make an unforgettable first impression for the pride of their city.

Airports in the Philippines when visiting Luzon

We can’t forget the capital’s gateway. Manila Ninoy Aquino International Airport (NAIA) is an icon to aviators and travellers alike who fly to and from Manila. Whether it’s because of its crucial function in national logistics or its role in Philippine history entirely, NAIA is perpetually recognised as one of the most important airports in the Philippines.

The airport may always appear busy, but its hospitality is always present. Moreso since nearby entertainment, such as luxury hotels, malls, and casinos, have opted to peddle their businesses just right outside its entrance. This makes NAIA a highly-prolific facility that is suited for world-class ventures.

The potential of Clark is endless since many investors want to see this city in Pampanga attract a global audience. Fortunately, the development of Clark International Airport seems to be the spearhead to lay out the foundation of a global city. The architecture of this airport is eye-catching, as evidenced by a few international recognitions. The community surrounding Clark International Airport is lively too, creating a welcoming atmosphere for any tourist who visits the Philippines through Pampanga.

Since then, this historic airport has served those who wish to see the wonders Palawan holds. It has gone through significant upgrades, among which improved passenger flow in the airport and better navigation systems for air traffic. All the better to ensure that tourists get to Palawan safely to see the Puerto Princesa Underground River with their own eyes!

While they are rare, Laoag International Airport is one of the few airports in the Philippines that hosts direct flights to Honolulu, Hawaii.

Airports in the Philippines when visiting Visayas

Mactan-Cebu International Airport’s popularity rose to prominence because of international recognition. And how could it not? Its tall, towering ceilings, illuminated with warm, amber light, make travellers feel like they’re entering a high-end cabin. Along with the numerous restaurants and hotels that seem to grow more every month or so, this gateway to the city of Cebu further expresses its hospitality generously.\

It is great to see the province of Bohol grow to reach its potential as another prime destination for tourists. This growth led to the development of Bohol-Panglao International Airport, replacing the province’s previous terminal, Tagbilaran Airport. Also known as New Bohol International Airport, this impressive terminal has an optimised design to sustain itself, such as natural ventilation and solar panels. It also has a cute wave roof design reminiscent of Bohol’s pride, the Chocolate Hills!

For people who spend (or want to spend) their life by the beach, they might know Godofredo P. Ramos Airport as Caticlan Airport. This airport is one of two gateways to the white sands of Boracay. Come summer, the locals around the airport reasonably expect an influx of tourists who want to enjoy Boracay’s beaches. While this airport is significantly smaller compared to other airports in this list, the world-class service it provides is more than enough to carry passengers to the island paradise of Boracay.

Airports in the Philippines when visiting Mindanao

Francisco Bangoy International Airport is the main gateway to Mindanao. Situated in Davao City, this airport hosts a few international and domestic flights for locals of Mindanao. However, it isn’t as busy as most of the metropolitan airports in the Philippines. It is also one of the oldest airports in the Philippines, having been built in the 1940s. It has since gone through multiple expansions to accommodate its growing passenger traffic. Phase 4: Upgrade, a program that started sometime in 2015, looks to improve overall operations in the airport.

Make sure to pass by sculptures made by prominent Davao artist Kublai Millan. Among them is a large sign advocating peace in Mindanao. The most accessible of these sculptures is of a large durian, introducing travellers to the Durian Capital of the Philippines!

Also read: 10 Things to Do in Davao — the King City of the South 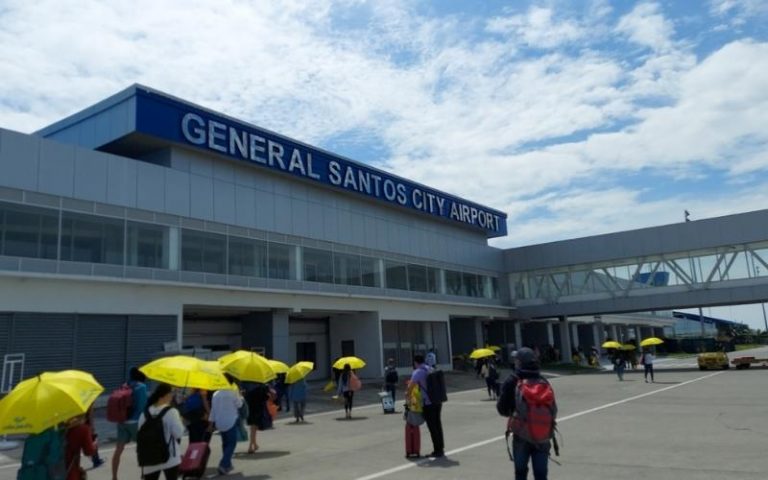 It’s also not unusual to see a massive Boeing 777 parked in the airport’s hangars. This massive aircraft loads not just passengers, but also massive tuna to be exported all over the world. This makes General Santos International Airport a significant part of its exporting economy.

A good deal of airports in the Philippines opened up recently, so it is a great time to travel. If the opportunity arises, travel to these places in the Philippines. It is all but guaranteed that Filipino hospitality is up and centre the moment travellers exit their aircraft and get their luggage.