Batanes – The Home of the Winds (Part 1)

“Innocence,” tour guide, Arthemus, might have told me, if we could talk through the ruckus.

Early morning in Basco, the van careens through karst mountains 70 metres above sea level on the way to Mahatao where a boat waits in the port, ready to take passengers to Sabtang.

The van carries with it a slew of anxiety, nostalgia, sexual tension, and soap, emanating from the ten passengers cramped in its seats.

If yesterday, these strangers, forced together by circumstance and a cheap tour package, talked in muffled duos, now they were a reverse juxtaposition to the stillness of the highlands.

As if to legitimise this new-found closeness, each has been given a nickname, taking the formality out of a Ronnel Victor or a Julius Ceazar.

Instead, Ronnel Victor, a 24-year old Bank Officer in Taguig, is now The Mayor.

The oldest in the bunch, celebrating her birthday (for what age, she won’t tell), is now Nanay.

A penchant for dresses and walking barefoot through rolling hills has made me Miss Cebu.

And Arthemus, with his patrician nose and moreno skintone, so similar to a well-known TV actor, is now JM de Guzman. 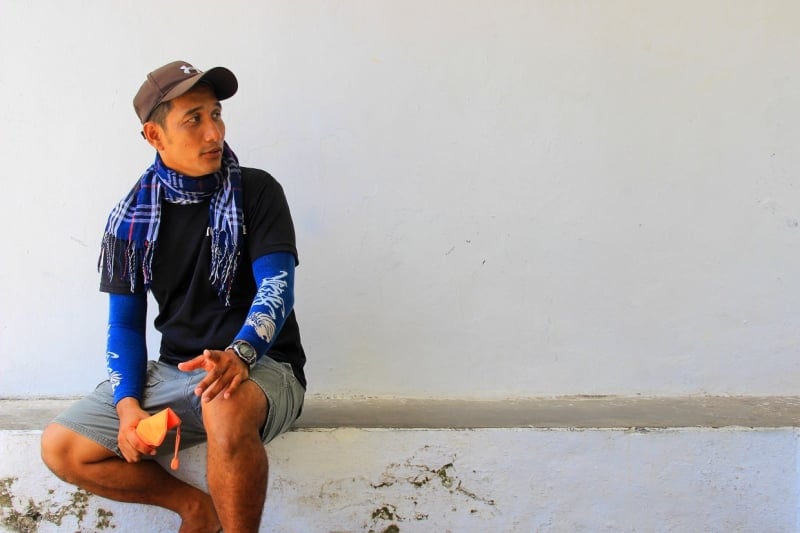 Halfway through the port of Mahatao, passing through the Spanish Lagoon, I let out a gasp followed by a facepalm.

“Kuya Art! Nakalimutan ko yung camera ko!” I tell him, an image of the device still fastened to a charger flashing through my mind. But there was also the rudeness of making everyone late to what might be the only boat to Sabtang for the day. I lie and tell him that the camera phone will do.

“Ay, hindi pwede, Ma’am. What if hindi mo na mababalikan ang Mordor?” Art prods. Mordor is his own moniker for Sabtang, this otherworldly cross between a UNESCO World Heritage site and Marlboro Country. He has been to most parts of Batanes, he says, but even Sabtang was paradise to him – endless green pastures with the West Philippine Sea as backdrop. It is the island where we would find our new profile photos.

So, we headed back. The others in the van politely hiss instead of groan as we make a u-turn to retrieve this non-negotiable from Marfel’s Lodge.

The whole van, used to him by now, chuckles like kids on a carpool as we count the number of “Blow Ur Horn” signs, another Batanes landmark, on the left.

Somewhere, there must be a crash of waves, disturbing unaware boulders on the shore. But we are oblivious to all of this, as if the height of Batanes has made us untouchable to all things that are hurting, including ourselves. To the non-comical, Arthemus Castillejos is just Art. And when he was six, his father moved the whole family from the hubbub that is Quezon City – a city constantly changing and in motion – to the posthumous stillness that is Batanes.

His playmates took him to the very spots that he takes tourists to now. Boulder Beach. The Basco Lighthouse. The Spanish Lagoon. Children kept on touching his face like they would a diety, so enamoured were they by his fair skin and foreign tongue.

“Tagalog lang yung alam ko noon,” he tells me, his only language an offbeat trifecta to the syllabic, prayer-like chant of Ivatan where a street greeting sounds like a prolific bearing of soul. Kup ka Nu Dios. God bless you. Art witnessed the Batanes of 20 years ago. Nothing much has changed, he says. It was just less inhabited, and people managed to live without modern luxuries like satellite TV and ice-cold Coke.

Most companies from mainland Luzon never considered expanding to Batanes for fear that its distance will be a hindrance to operations, but with the coming of cheap flights, Batanes has somehow become more accessible.

Internet companies send in representatives, urging residents to finally attach to the rest of the world. Boatloads of Coke come in from Tuguegarao. There were only three movies Art’s neighbours, the sole owners of a television set, routinely played on Betamax then: Benhur, The Ten Commandments, and The Sound of Music. Epic cinematic efforts that tried to equal the magnanimity of the place. Tried to. But never really succeeded.

For as epic trips go, most Filipino travellers agree, what could be more epic than Batanes?

Geographically, this is inarguable with Batanes being the Northernmost province in the archipelago. Ivatans, I imagine, must have channeled Maria and ran through its steep hills, hat tossed to the air in surrender.

But those so used to this landscape are oblivious to the grandiosity of cinema or of Batanes. It is standing room only. Locals are cramped between motorcycles, tires, and construction supplies. The whir of the motor cuts our conversation but locals are unperturbed by the noise. Just as they are, Art says, unperturbed to the feverish clamour for the island.

These might be the very same locals who stare at the trigger – happy set of tourists this morning who, even before the faluwa arrives at the port, has already filled up half of their memory space with photos of the outriggerless vessel and its foot-controlled steering pole.

But Art knows too well why Batanes shouldn’t be underestimated even by its locals.

After an obligatory visit to the Tourism Office, he takes us to the sinadumparans – two-sloped traditional houses – in the village of Chavayan. Usually quiet, Chavayan especially today is a ghost town. Abandoned cats and chickens own the stone roads. Clustered garlic cloves and papery, dried gabi leaves rustle in the wind. Vintage Japanese bicycles are strewn on the ground. Chopped wood and coconut shells pile up outside homes. The remaining functioning houses that supposedly still held residents are, today, uninhibited.

The men have apparently crossed to mainland Basco for an inter-island basketball cup. The women are in the fields. The children in school.

The only signs of life are found on the beachside where a group of kids are holding some sort of forum underneath a thatch hut heavily tilted to the right.

We walk through the village, stopping every few seconds, to take photos of brightly-painted doors and vine-covered walls. It begs to be entered but the city dwellers in us, mindful of boundaries, tethers our own curiosity. But Art insists.

In Batanes generally, he says, it’s uncommon practice to lock doors, even if you were leaving for weeks on end. They are purposely left open for neighbours to check the whereabouts of your possessions.

This virtue of unbroken trust is what influenced the concept of Honesty Cafe in mainland Basco, its visitors and residents allowed to pay without the scrupulous eye of an attendant. In the cafe, visitors drop their payments on a wooden box and write what was consumed on a ledger for everything from cassava cookies to motorcycle rentals, its keys left hanging in the keyhole for convenience. This practice isn’t true to Honesty Cafe alone. Sabtang has its very own Conscience Cafe where we seek shade now from the mid-morning sun. A bunch of bikers and a priest testing out their lungs’ strength by belting out videoke hits inside. The quiet-seeking set of the group, wait in the arc outside, sipping their sodas and Minute Maids. Original black and white photographs are hung on the walls of the arc, showing the Sabtang of a hundred years ago when it was nothing but a 20-house village.

Across us is a government building that reminds passersby that, truly, “Honesty is the best policy; it begins with me.” It’s also reflected in battered school signs all around Batanes, constantly reminding young Ivatans of Batanes’ common virtue.

It is again in Timyan Viewpoint, Art’s Mordor, a wooden sign marks the vendor’s plea in black ink “Dios Mamajes. For Sale. Ladies T-Shirt. 250. But I want po honest.”

While we while away the time, tricycle drivers with thatch roofs over their vehicles join us and share accounts of ₱40,000 left by tourists in the St. Thomas Aquinas Chapel returned days after with nothing out of place. No surprise that Batanes has zero-crime rate. It’s the outsiders, Art says, who are often jailed.

This somehow sealed, purer world where neighbourly motives are unquestioned is enough to make Ivatans think of it as a norm rather than an archipelagic exception.

They question why Batanes holds a talismanic magic to outsiders when they themselves are, as soon as they find a way around the expensive airfares, ready to depart.

But if Art is so verbose to say there is nothing special to this collective virtue, he need only be reminded of his first few hours back in Quezon City.

With his rent and food allowance tucked too tightly in the back of his jeans, the neighbourly thing to do, a city dweller presumed, was to help him pick it. Then, run away with it. Art recounts this encounter as we find shade in the front arches of the Conscience Cafe.

In an embarrassed gesture, JM de Guzman wrings his baseball cap and then puts it on backwards. A boy recounting his snafu.

Previous ArticlePinoy’s Guide to Surviving Winter in Iceland: 7 Clothing Essentials to Pack
Next ArticleWe Spent a Day in Anawangin & Capones with a Budget of Only ₱1,256