“Mahirap ang buhay dito.” Noynoy tells me. We sit on a small crevice in Magasang, waiting for the wind to die down. In the distance is Nalangoy, a displaced chunk of rock in the middle of the open Pacific. It stands there like a sentinel, in constant battle with the waves, unafraid of their wrath.

Noynoy and I sit there for what seemed like hours, just a metre away from the edge of the cliff where down below, water that packs a velocity of 70 km/hr collides with a barrier of rocks to form a high curtain of sea spray. Even at 36 ft above sea level, the water reaches the crevice and makes our strides more susceptible to slips. We flatten our backs against the jagged formations to gain more stability. If you want to feel especially small, just look at the waves or look straight down. There is bound to be a natural element more powerful than you. BEL-AT. Noynoy makes his way to the bottom of Bel-at. Difficult as it may look, Bel-at is the most
accessible of the rock formations. It is easily reachable through a wooden boardwalk that crosses some
mangroves and shallow waters.

But human woes get the better of both of us. When Noynoy says that life is hard here, he doesn’t mean so much that Biri is isolated from its bigger sisters Luzon in the North and Visayas in the South and so, is very often in the forefront of storms, although there is that too.

When he says that that life is hard, he means more that he is just one of around 100 habal-habal drivers in an island that may well have more supply rather than demand, and that when he gets home, he is met by a wife who has far bigger dreams than he. There is plenty of kamoteng kahoy to go around, but all the rest is never enough.

I meet Noynoy’s partner, Sharon, and his son, Mark, their own house just across from Noynoy’s mother’s house where I am staying. The house is dangerously close to the water’s edge, so close that most of the front yard is considered a jumpoff point to the nearby island across, via boat or via a long swim if you can muster it. We wave goodbye to Sharon and Mark before riding off to the first rock formation, Bel-at.

TINAMPAGAN. There is a particular set of rocks Noynoy considers the 6th formation. These are big
boulders that fell overnight during slight tremors in the earth. Consequently, they fell into the sea and
created new formations. Noynoy names this new set “Tinampagan”, which in Waray means “What was toppled upon.”

Life was hard, Love was harder

Formed by persistent waves, the five formations of Biri – Bel-at, Puhunan, Makadlaw, Magsapad and Magasang – form a natural, otherworldly set of sculptures. Each rock formation has a distinct geography, and each requires a different skill set. Slide. Crawl. Hike. Climb. And in my case, crawl some more.

In Bel-at, we spot a group of foreigners on their way back to town. They are the last set of visitors at the rock formations we will spot for the next three days. Past mangroves and overgrowth, Noynoy navigates through huge boulders and jumps off straight to holed flatbeds. He climbs like his feet have grown some suction cups. I climb like a toddler, unsure of every step.

He points out to what he calls the 6th rock formation. He dubs the set Tinampagan for a series of rocks who have fallen and have made a new set of abstract sculptures.

“Maraming kuwento and mga bato na ‘to. Kaso lang hindi ko alam maski isa.” Noynoy tells me cheekily. He starts off with a story of a man named Berbenote, a noted townsman who eventually gave Biri its name. as to why and how, he doesn’t know. All he knew with surety was that life was hard and love was harder.

I laugh off his dramatics, and mine, and prod him for a more difficult climb.

“Eh, ikaw, ba’t ikaw lang mag-isa pumunta dito?”, he asks suspiciously. How do I tell him that I had come here, not because life had seemed especially hard, but because it had seemed too good, and it had gotten the better of me?

I was presented with opportunities that I didn’t know what to do with, and they eventually turned into baggage. And so at the beginning of the year, as part of a personal purging, I promised to travel less, but to travel with more consciousness, to make travel less of a running away from, but a running to. I was going to live each experience, I resolved, because of its relevance and not just because of the novelty it presented me.

All these though seemed like such prissy city sentimentalities when spoken in front of Noynoy who finds his fate back to his hometown after a sad stead in urban Manila. So, I remained mum.

In between climbs, Noynoy reviews the photos in my camera and eavesdrops on the life I have stored in memory cards. A photographer once told him, one of the many who visit to see the island’s formations, that each photo could fetch as much as ₱500.00. “Pwede mo to ibenta.” he says of the photograph he takes with my camera. His work might just hang in a wall somewhere. I tell him it just might.

In times like these, when the awkwardness of our woes surround us, we stare at the ocean, Magsapad jutting across, and move on. 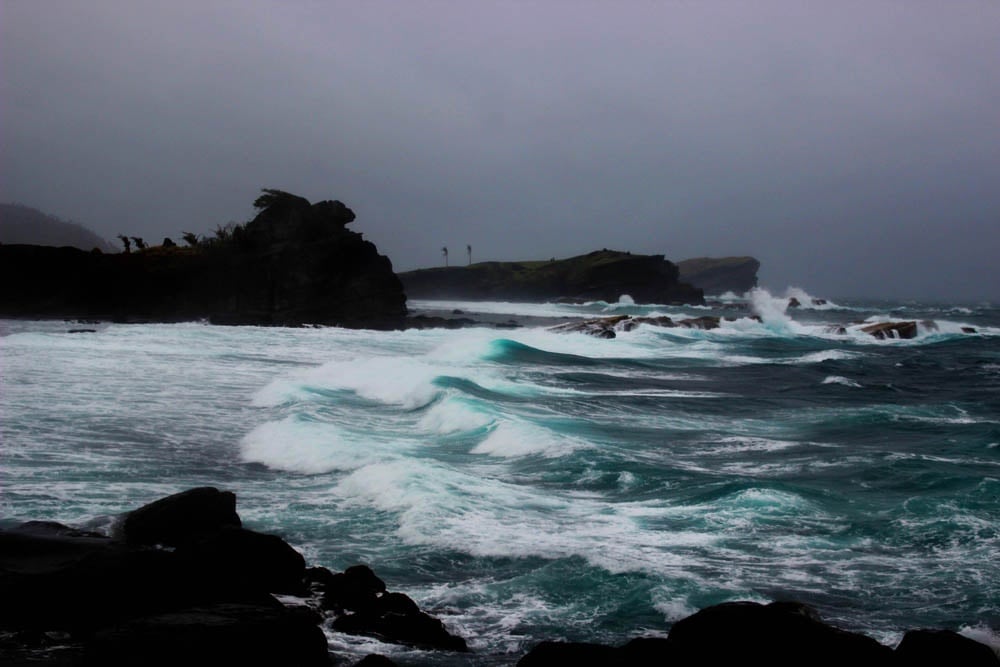 THE POUNDING PACIFIC. This is Biri on a good day. On stormy seasons, waves can reach up to 36 feet high, forming the naturally-sculpted faces of the rocks that range from smooth and wavy to gnarled and jagged.

What makes climbing difficult is Biri’s erratic weather. It can rain heavily early in the morning, heat up again midday, drizzle in the early afternoon, calm down for a couple of minutes and rain heavily again at the end. Weather passes Biri as if it were busy for another appointment. It seems like it was constantly just passing by.

“Dapat positive tayo, para lumabas ang init.”, I prod Noynoy, who has looked far too many times to the sky as a former fisherman to determine the weather more accurately than my affirmative mindset ever will.

“Positive nalang.”, he calls out.

For Noynoy, who finds harshness a constant companion, the climb is nothing. He constantly meanders ahead as if to say to “What? You find that inclination steep?” Feminist stubbornness comes out and so I climb alone, constantly looking at the back of his head metres away.

The formations end in a 36-foot drop straight to rocks and waves. I teeter on the edge, watching sea spray break intimidatingly on the barriers.

Just a metre a way was the edge of the cliff. I swallow my building vertigo and climb up a five-foot opening with no foothold, requiring an upper body strength I simply didn’t have. Returning Noynoy’s grin, I ask him to pull me up. 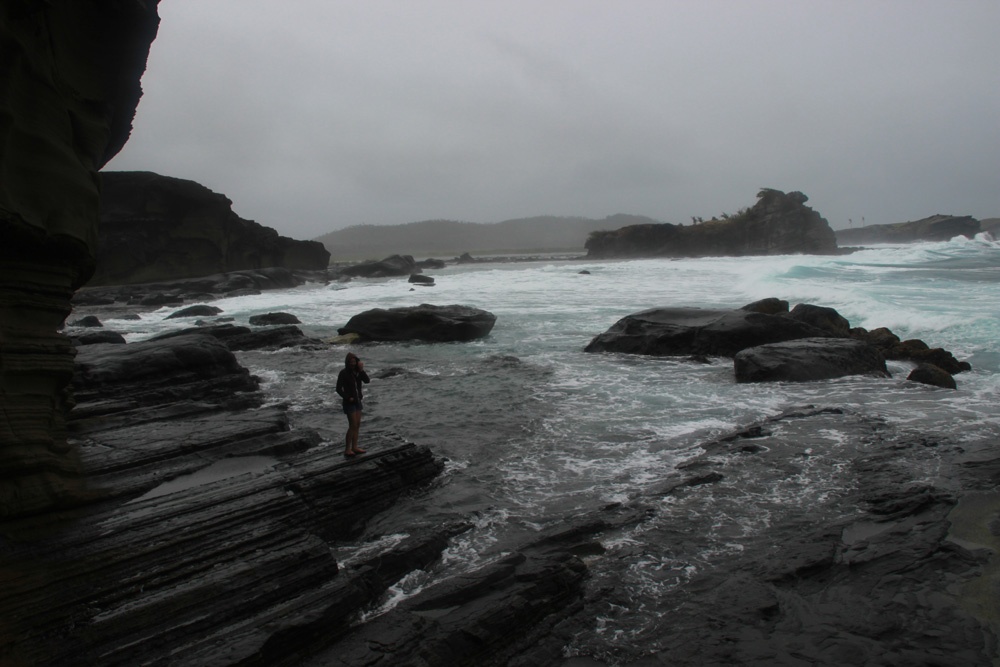 By the second day though, I find my bearings and we reach the top of the more difficult Magasang and the most difficult Makadlaw.

Every crag is a knife. Every formation has millions of knives. The jaggedness of the rocks may well save you from rolling completely to the bottom but a misstep means a gash in the foot, a scrape in the elbows or a plummet several feet to the bottom. 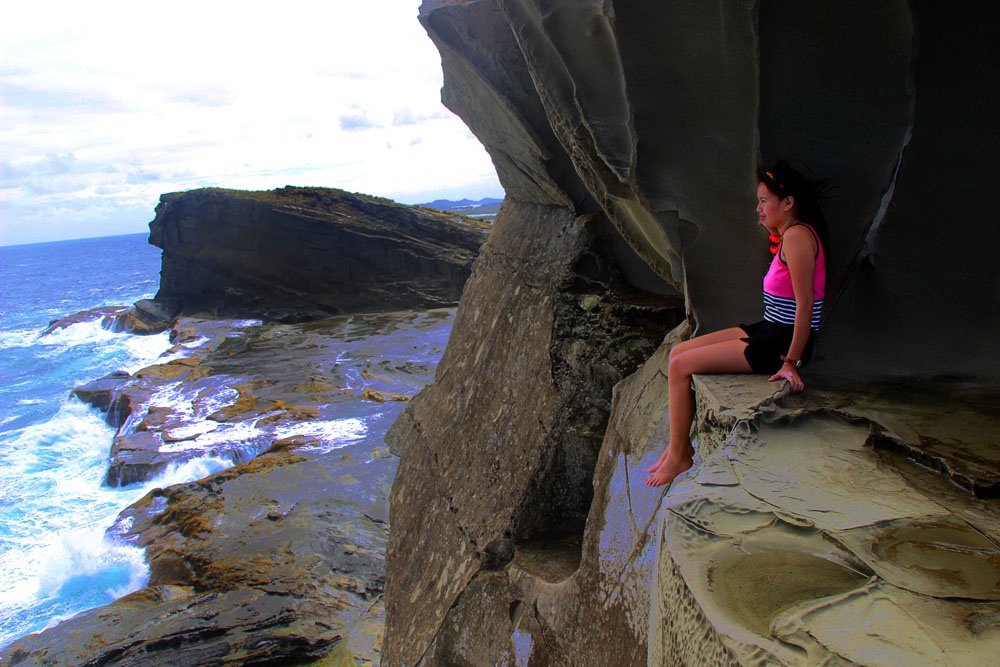 What is exhausting is not the physical exertion but the sheer concentration needed in every step. The rocks are deceptive, slippery even when apparently dry. Then, there’s the constant intimidating thrash of the Pacific, a thunderous clap indicating that waves and rocks have collided again.

Makadlaw’s side has a completely different topography, a smooth surface with no handles and a steep inclination going to the top. Makadlaw is partly a grazing area for cows who stay for the abundant cogon. We teeter between their equally-abundant excrement to lie on the grass and look at nothing in particular.

By late afternoon, both of us are spent. Noynoy sheepishly asks if we could take a break to get a snack at the town square. There are very few eating establishments in the area. Biri has the occasional carenderia and burger joint. Other than those, their restaurants are waylaid in hotels. Noynoy and I eat in silence, watching the statue of Jose Rizal sculpted by their very own Mayor stare back at us across the square.

Trying to catch the sunset, we make our way Magsapad, the most scenic amongst the formations. Unlike the last four, which only have rocks and a sprouting of cogon, Magsapad is green with lush Bermuda grass covering the top and a sprinkle of coconuts and egg-shaped boulders. 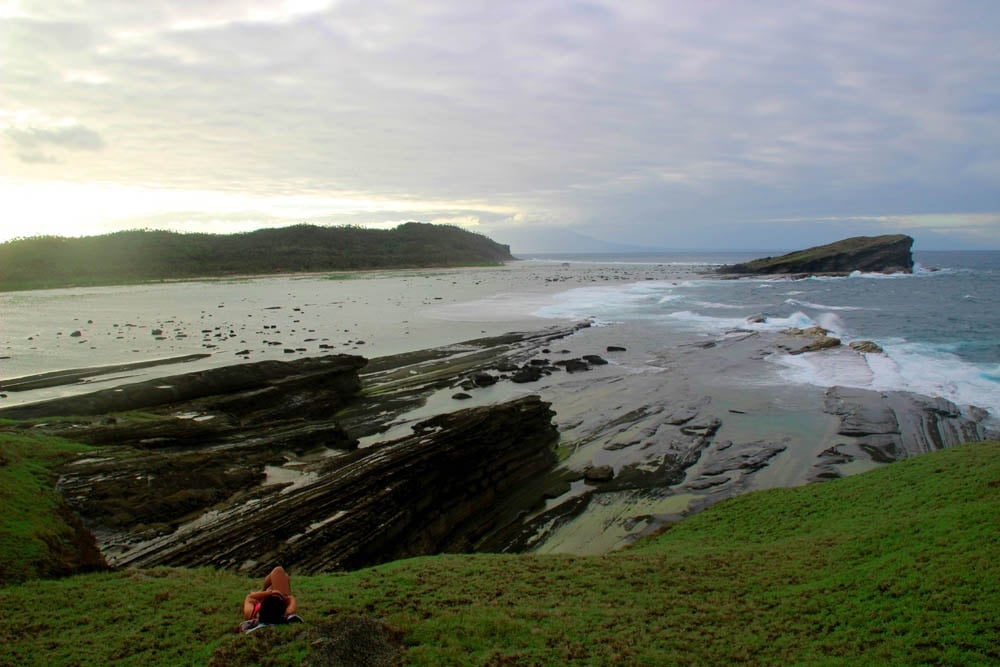 We lie down in separate corners of Magsapad, trapped in our own thoughts. He faces eastward to watch the pounding waves. I face the opposite for the last rays of the sun. Look closer between these two and you will find a landscape that doesn’t back down from the elements. It has perhaps even developed a certain immunity to it.

We sit beside each other, trading stories of loss, the only language I know how to reach Noynoy with. Then we sit away from each other again until darkness has laid its claim.

I do not know what greater consciousness means really, whether it’s the ability to feel so much more heartbreak to commune with the world or the ability to feel enough gratitude without the guilt of being the only figure feeling it, but if it should mean this glorious empty, this silence in the mind, the absence of both heartbreak and happiness if only for a while, then I’ll take it.

Previous ArticleWhat Foreigners Say About Filipinos & How I Dealt With Them
Next ArticleMt. Apo Reopens to Public