I have known and have been told that people of Philippines know how to celebrate, but it wasn’t until I travelled to Bacolod in Negros Occidental that I truly understood the spirit of Filipino fiesta. It was my first time to experience such things but surely not going to be the last. The trip was totally worth it! 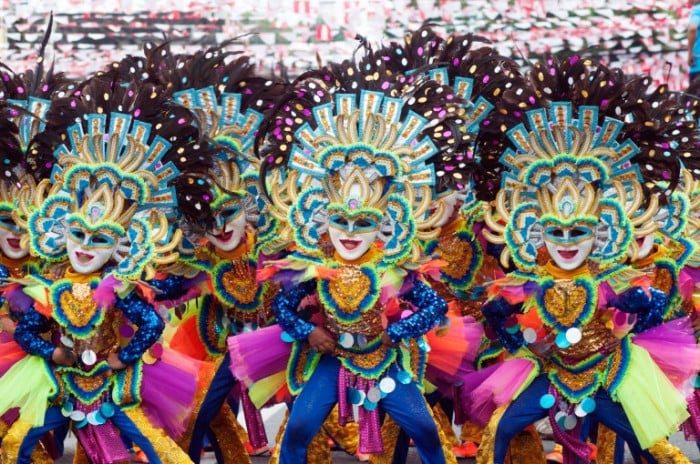 Fiestas occur all year round in the Philippines since the Spanish era. You can feel similarity in the way it is being celebrated, with colourful bands and parades. Bacolod, known as the “City of Smiles”, is famous for its food and abundance of sugar cane production. Then comes October and the city turns into one big party place with people flooding into the town, local and foreigners, to celebrate one of the most famous festival of Philippines – MassKara. 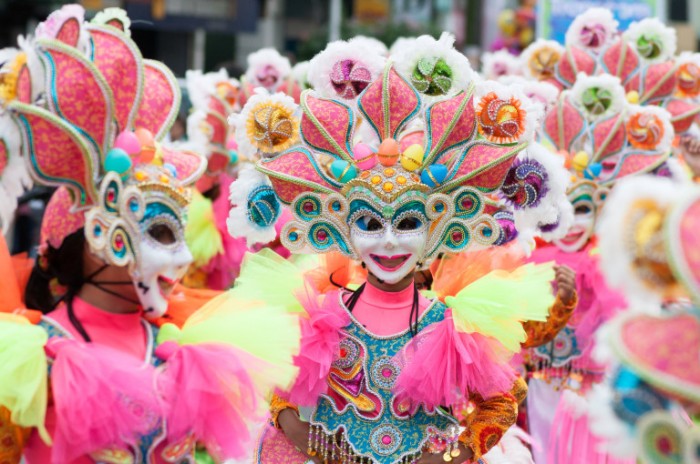 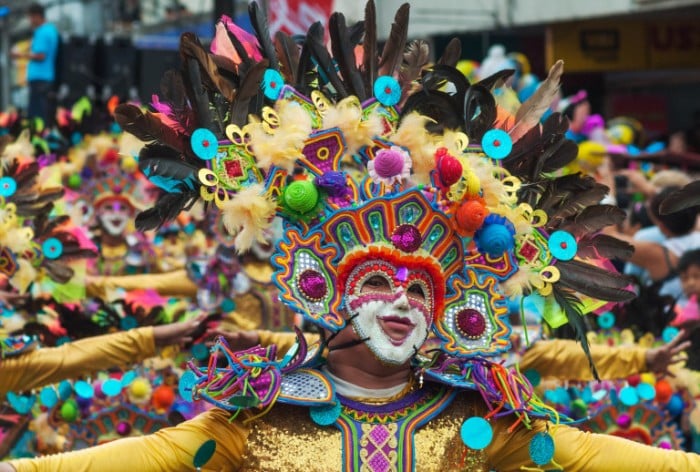 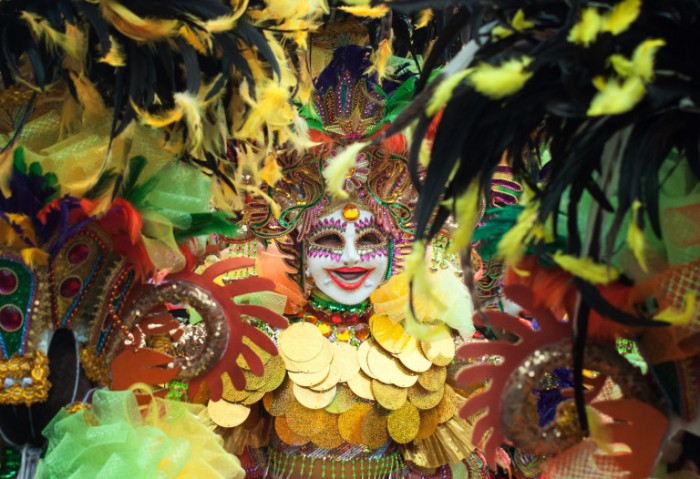 Smiles all the way

The history of MassKara Festival goes back to 1980 when the economic crisis severely affected Bacolod. Sugar cane, which is the main lively hood of Bacolod, hits an all-time low price due to invention of corn syrup as a substitute, in United States. Things became worst when on April 22 of the same year, an inter-island vessel MV Don Juan collided with a tanker and sank in Tacloban City. An estimated 700 lives were lost during that tragedy which included some of the prominent families in Bacolod. 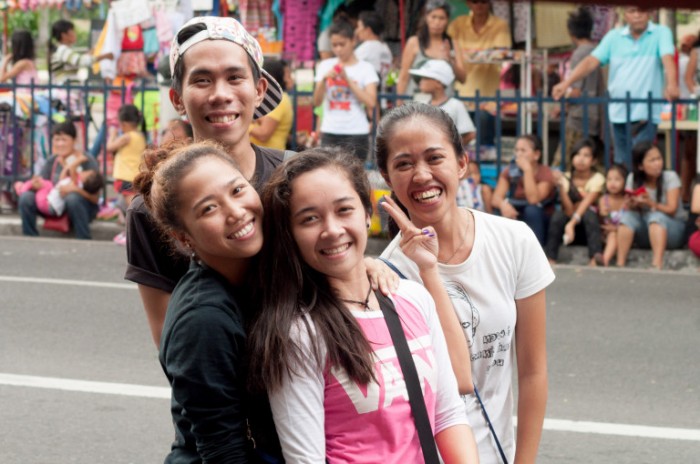 One for the camera 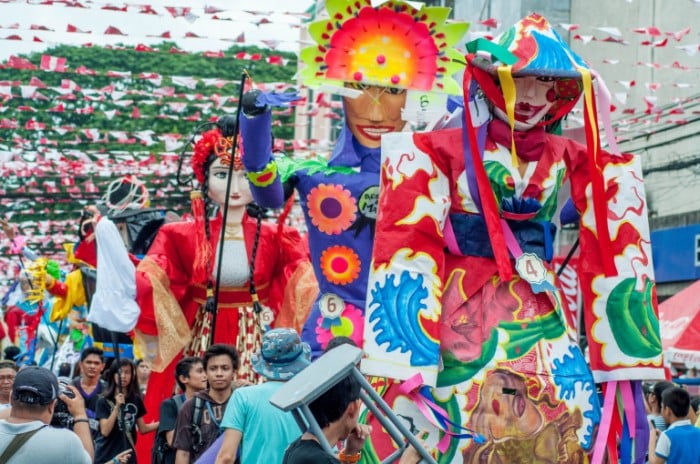 Giants on the streets

Struck by the double disaster, the government decided to give people something to smile at and that gave birth to MassKara. The name MassKara Festival is taken from the words ‘‘mass’ which means crowd or many, and ‘’kara’ which roughly translates to face, so MassKara means many faces. MassKara was conceived by the Art Association of Bacolod (AAB) with an intention to create a street dance parade thus getting away from an unnecessary civic-military parade. It was also meant to hide the tears and sorrow brought about by the sugar crisis and the MV Don Juan sea mishap. 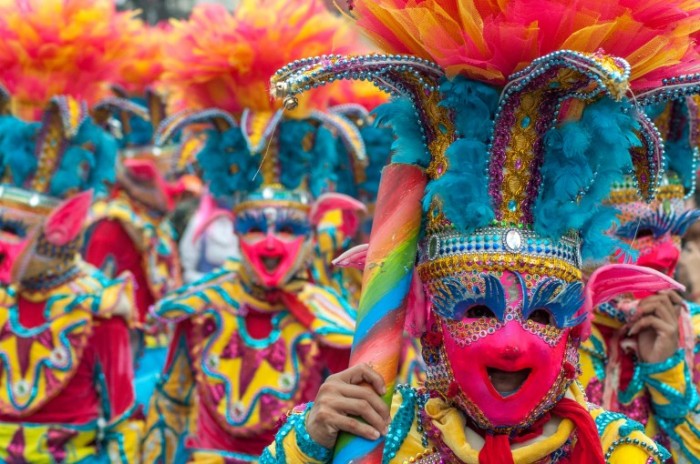 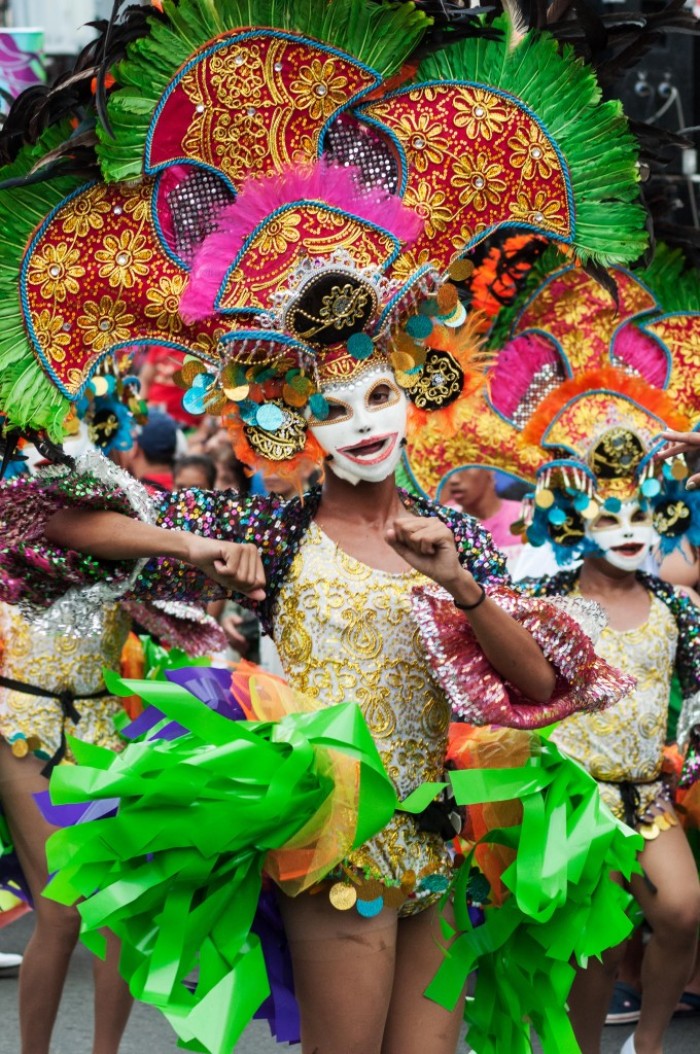 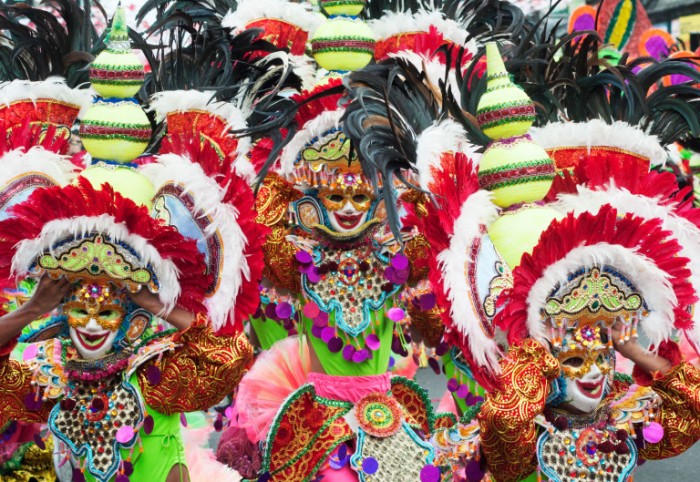 One of the liveliest and vibrant festivals of Philippines, the MassKara is not all about the colourful parade and catchy Latin music. It is a reflection of the spirit and zeal of the people of Bacolod that no matter how bad things get, they are always prepared to fight back and emerge as winners. 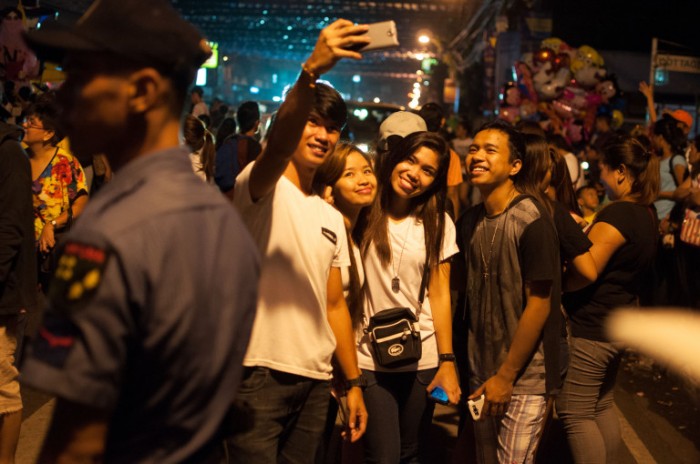 People from all walks of life enjoying the festival

Big vibrant masks are the essence of this festival. Different Barangay groups work hard to have a stand out performance with eye catchy dresses and neatly crafted masks. The fiesta is generally spread through a Span of three days that includes flamboyant parades, from different barangays, followed by electric MassKara on the final day, and not to forget the wide range of food to satisfy your taste buds.

Lacson Street is generally the main attraction, but if you want to get a better view and capture some stunning images it’s always good to be at the starting point. For 2015 MassKara, I personally preferred staying at Araneta Ave (Better access to the parade) and eventually made my way for Lacson Street by the evening. Carry a pair of comfortable footwear.  The whole fiesta is spread over a stretch of few kilometres. The roads will be generally jammed or block. Best way to explore the place is to get a tricycle ride or use your feet. 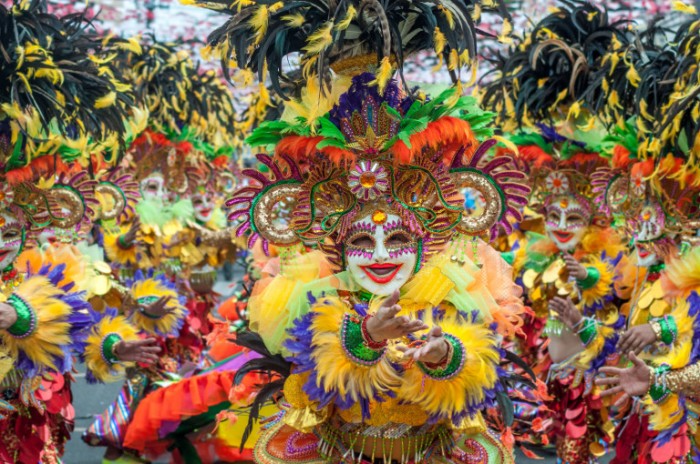 Bacolod is home to the famous chicken inasal. From Manokan country food stalls to Chicken Deli, Char coaled grilled chicken can be spotted everywhere. Don’t forget to try out the pastries at Calea. Though I am not a big fan of sweets, but being in Bacolod (the sugar cane capital) how can I miss on it! 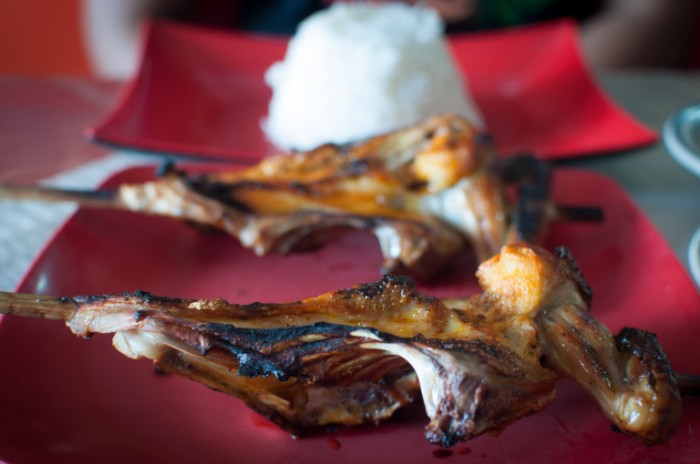 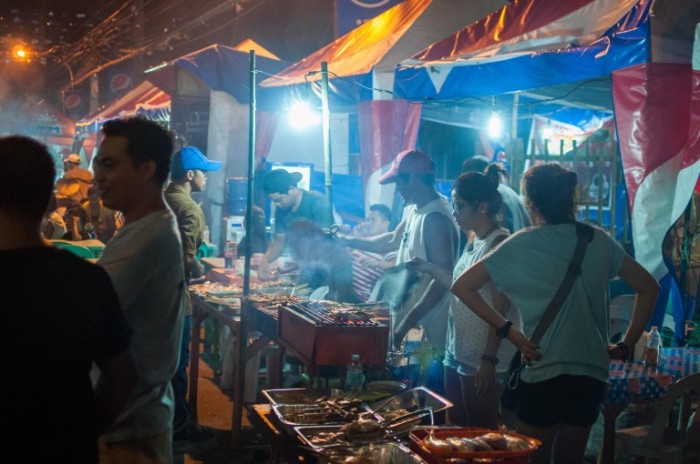 Vibrant colours, parades, costumes, food stalls – you name it, they have it. For any photography enthusiast and food lover, MassKara is a pure heaven! 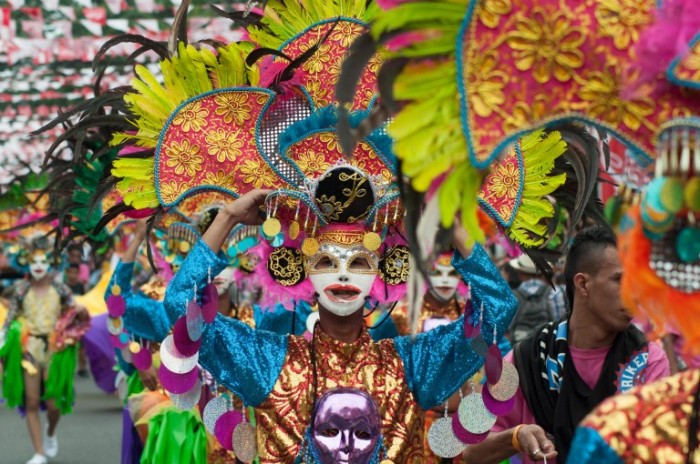 The beautiful ruins of Bacolod

The ruins is a beautiful piece of architecture built in the memory of Don Mariano Ledesma Lacson’s wife Maria Braga. To overcome the sorrow and help Don Mariano move on with his life, he decided to make a magnanimous structure that will always remind him of Maria. In his pursuit to fulfill his dreams he was helped by his father in law, who was a captain on a ship and made sure that the furniture, decorative items and chinaware are being exported from all over Europe and Asia as per Don Mariano’s need.  The story very much resembles how Shah Jahan build Taj Mahal for Mumtaz. Probably that’s why it’s also known as the Taj Mahal of Negros.

The mansion met its fate during World War II, when the USAFFE (United States Armed Forces in the Far East), then guerrilla fighters in the Philippines, burnt the mansion to prevent the Japanese forces from utilizing it as their headquarters.

What stands today are the reminiscence of Don Mariano’s masterpiece and his love for Maria Braga. The ruins stand tall amidst sugar plantations and till this day continues to amaze local and foreign tourist. 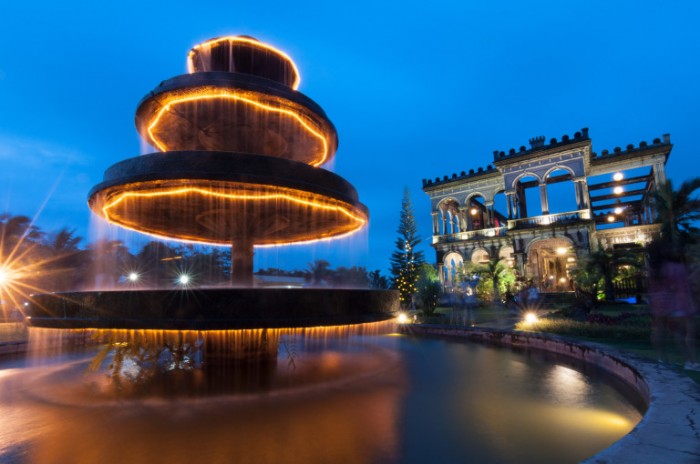 The ruins are located on the outskirts of the city. The safest way to reach there is to take a cab. Pay some extra pesos and ask the cabbie to wait for an hour or two. I literally had to visit there twice to capture the perfect shot with blue skies in the background.

It’s hard to believe how fast weather changes in Philippines. It was all dark and raining cats and dogs, but few minutes later I get clear blue skies! The image below was taken barely five minutes after the heavy rainfall. 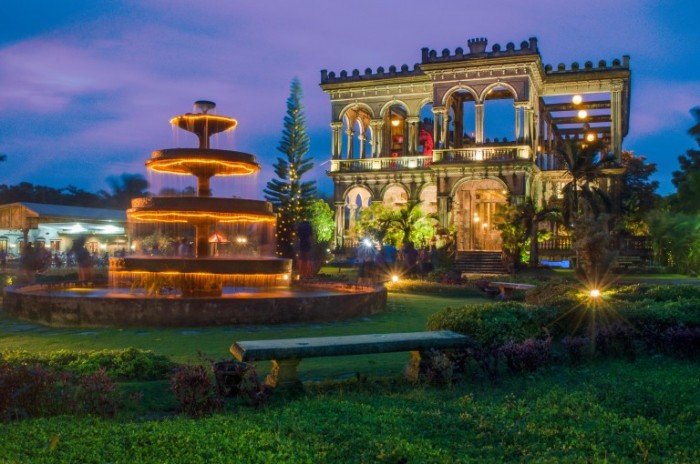 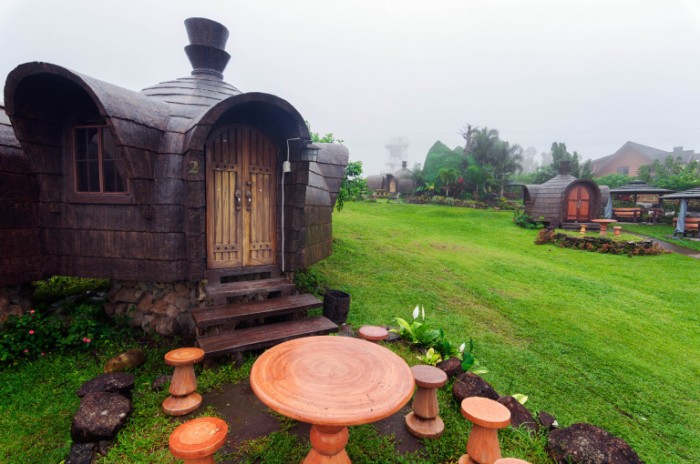 If you have a day to spare then do not miss on this place. It is relatively a new tourist attraction with lots of activities to keep you busy for the day. The resort is located approximately 22 kms away from the main town. If you are in for some endurance test then try their rope walk or zip lines. Elevation of nearly 800 + metres above sea level makes you feel like you are in Tagaytay , but of course with amazing view of Negros Occidental. 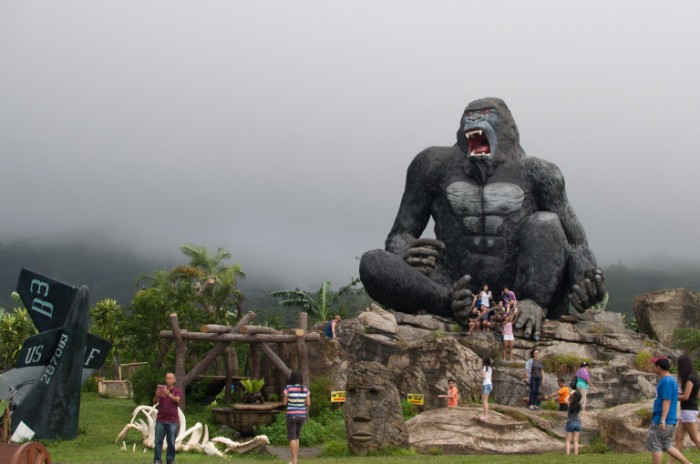 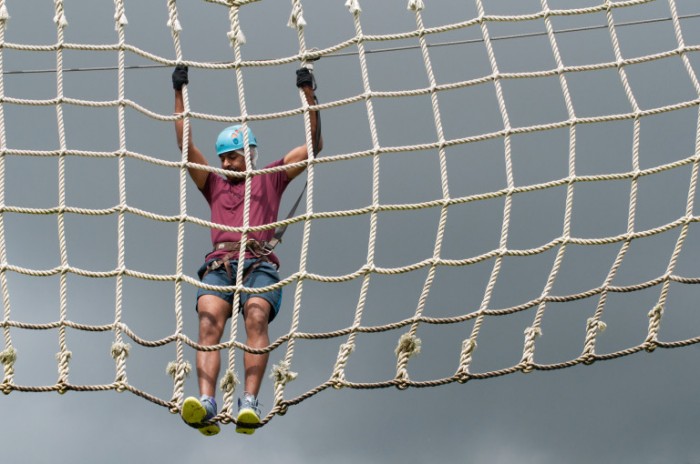 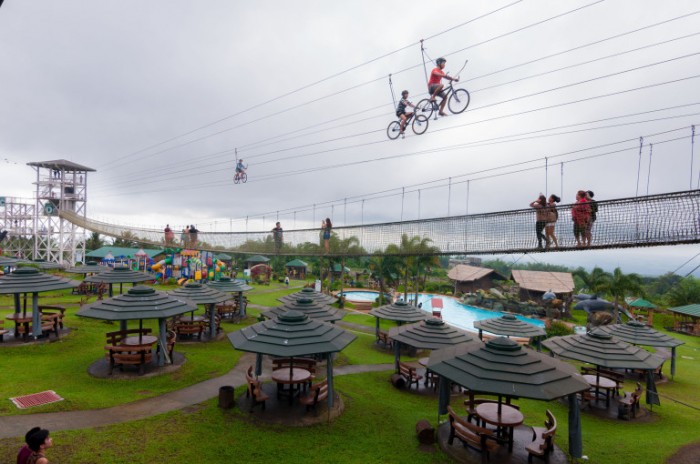 The easiest way to reach Bacolod is via Air. Majority of the airlines, mainly Philippine Airlines and Cebu Pacific have daily flights to Bacolod with approximately 45 minutes travel time. Upon arrival, one can take a bus or taxi to reach the city.

Bacolod may not be the top most tourist location, but it is highly recommended to visit the town during MassKara.  Please book the hotels well in advance. The place really runs out of hotels in no time, with most of the hotels located on Lacson Street. For those tourists who love to take rental scooters (I personally prefer them), there is absolutely no availability in Bacolod. Get a cab or a tricycle. 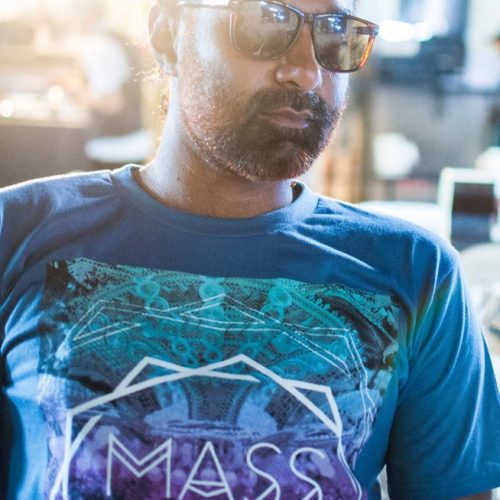