This Podcast on Filipinos Living Abroad Is Definitely Worth Tuning In

With the Philippines currently at a crossroads right now, it’s no wonder more and more local Pinoys are considering moving to another country. For some, it’s a temporary move to try making it in a foreign land, while for others, it’s a process of completely starting over. Either way, it’s a good way to see firsthand if the grass truly is greener on the other side.

Coincidentally, did you know that there’s a Pinoy-made podcast called The Greener Side? And yes, it’s exactly what you think it is: A series of interviews with Filipinos living abroad. It releases a new episode every other Tuesday, each one centering on a specific country and a type of immigrant visa. It aims to give listeners a better understanding of the whole process (that may often feel daunting); from visa applications, to adjusting to new cultures.

The woman behind one of the best new Filipino podcasts 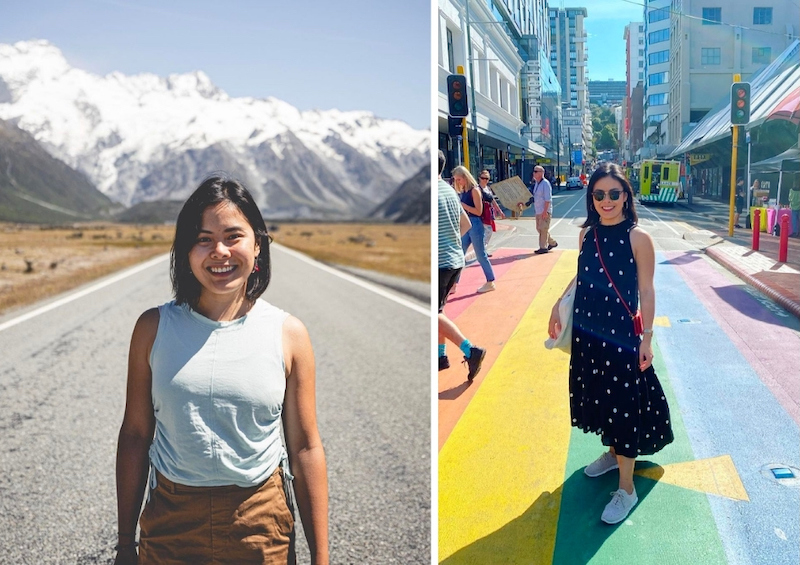 The Greener Side is the brainchild of Kring Lacson, a 30-something who grew up in Cainta and is currently based in Wellington, where she works as a marketing executive. Having lived in New Zealand for nearly five years now, she started this passion project in June 2021. So, what exactly inspired her to do it?

“A lot of my friends asked me how I moved to New Zealand, and what they would need to do to be able to move overseas themselves. It made me think that, surely, many other OFWs get asked that same question! That, combined with my love for listening to podcasts, made me think that I could make my own podcast discussing that topic,” she said.

Kring initially moved to Auckland to take a business course, though living abroad hadn’t always been part of her plans. “I thought I’d stay in the Philippines forever because I wanted to always be with family and friends,” she admitted. “New Zealand became my top option because of family friends who were already based here, so it would be easier for me to adjust.”

Also read: This Pinay Talks About Migrating With Her Emotional Support Animals

Why this podcast is your guide to moving abroad

We’ve caught up with Kring to talk about her experience so far with having a podcast about different Filipinos living abroad.

Do you know all your interviewees personally prior to featuring them? If not, where do you often get leads?

“Most of them I know personally, since many of my friends have also moved overseas. The Greener Side is the perfect avenue to catch up with them, while helping Filipinos who are considering moving to another country. I haven’t spoken to most of these friends in years — buti na lang they’re all super game to be interviewed!

The podcast community is also very collaborative; there are Facebook groups that cater specifically to Pinoy podcasters, such as Podcast PH. My interviewee in Australia’s Temporary Skill Shortage Visa came from one of these groups. Podcast Network Asia, which is a network of podcasts in the Philippines and Indonesia, also helps podcasters collaborate with each other. I was able to produce an episode on Canada’s Provincial Nominee Program thanks to them.” 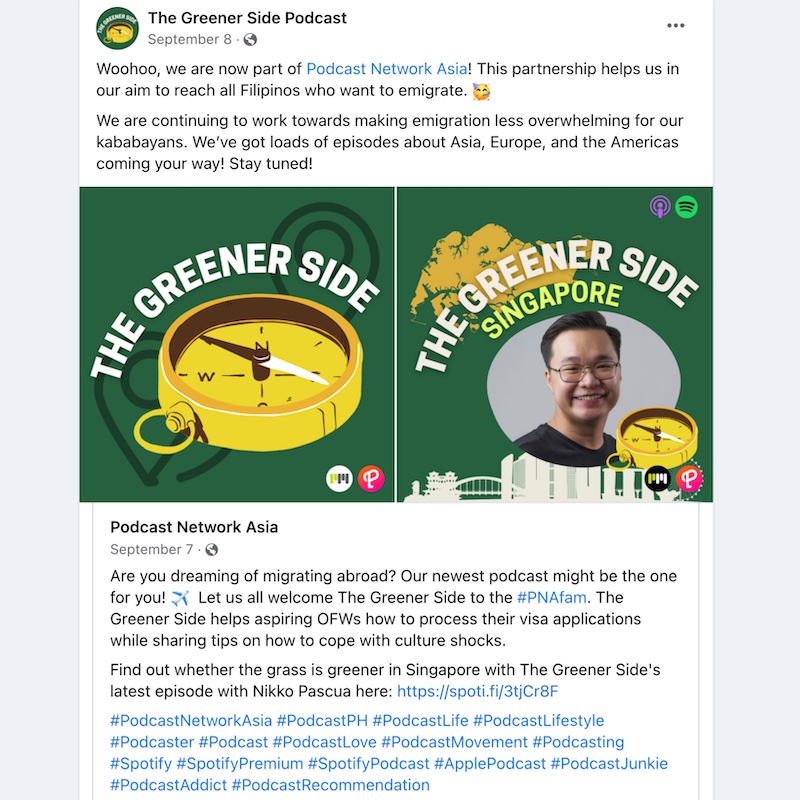 How do you determine which country to feature next?

“We heed the call of our listeners. Our listeners send us requests for countries and visas to cover, so we use these as a guide for upcoming episodes. At the moment, we have requests for USA’s H1B visa and for various work and student visas in Europe. We have interviewees lined up for these!”

Also read: 9 Easiest Countries to Immigrate to For Better Opportunities

What are some important things you learned from these Filipinos living abroad whom you’ve interviewed?

“First, most visas ask for a few of the same things; there’s an umbrella of documents that are required in many (if not most) visas, so it’s handy to have a folder for these and keep them updated. Among these are: your passport and a passport copy, a copy of your NBI clearance, birth certificate, job certificate, and even bank statements. As you can see, these are basic documents and are relatively easy to obtain! 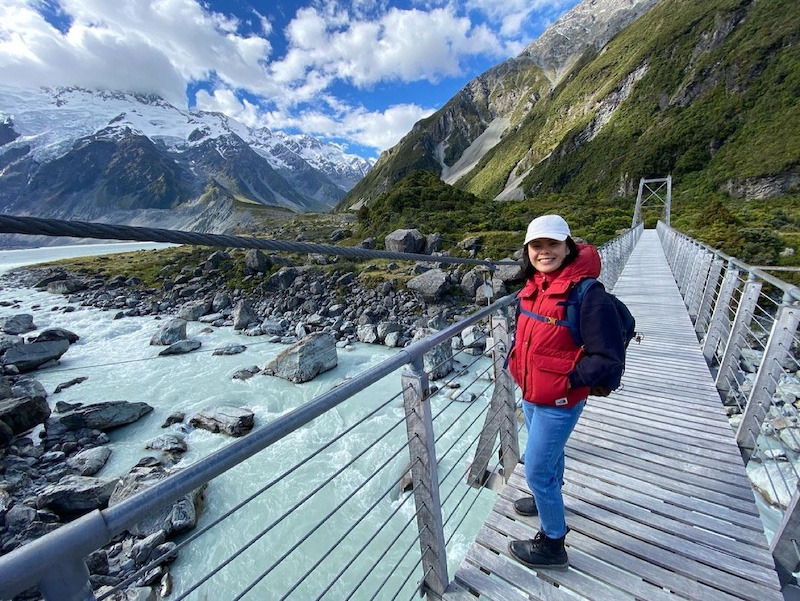 Second, the proverbial greener side is not all it’s made up to be — many OFWs battle with homesickness. This is a sentiment many of my interviewees share, which is why they are game to be interviewed. We want to talk with fellow Filipinos living abroad as often as we can! Also, I learned that integrating with the culture is more important than you might think. A country may provide better social services, higher salaries, and so on; but if you’re not culturally assimilated, it will never truly feel like home. This may sound like a lofty idea, but it’s a real struggle among OFWs.

This last point isn’t something I learned from interviewees, but making a podcast is so rewarding! It’s a lot of hard work, but it’s also a ton of fun. With a podcast, you get to connect with both the interviewees and listeners on a deeper level, and you become part of a community. It’s deeply fulfilling, and it’s exciting to see where it would lead to!”

Which episodes would you say are your personal favourites?

“One would be this episode about Spain’s freelancer visa. There are so many reasons why I and the listeners love this episode. It has one of the highest engagement rates — by the end of this 40-minute episode, 75% of people were still listening! It provided info that isn’t common knowledge among Pinoys. For instance, who knew that there is such a thing as a freelancer visa? As a PH citizen, you’ll need to be in Spain to apply for this, but it’s nonetheless encouraging to know that we have this option.

I also learned that, provided you’re fluent in Spanish, you can gain citizenship after just two years of residing there! This fast-track citizenship is special and only applies to citizens of former Spanish colonies. Our interviewee for this episode was inspiring. She grew up in hard conditions and wasn’t able to finish her college studies. Despite — or perhaps because of — this, she upskilled, so much so that she’s able to live and thrive in Spain. 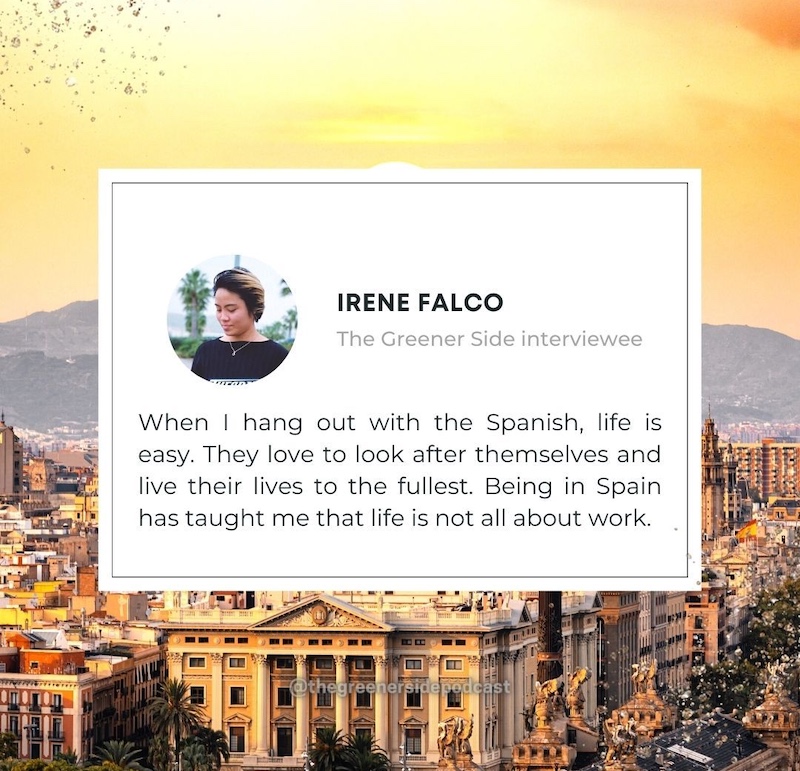 Another favourite of mine is the episode on South Korea’s D-8 work visa. It’s our most recent [as of this interview], and it provides all SoKor lovers information on the Korean workforce and society, and the forces that shaped them to be what they are today. It was truly enlightening, especially in regard to societal issues that aren’t necessarily depicted in mainstream media.”

How do you balance running this podcast with your full-time work?

“Since The Greener Side releases episodes every other Tuesday, this allows me to produce quality content without sacrificing my personal life. I use my after-work hours and weekends to produce the podcast.” 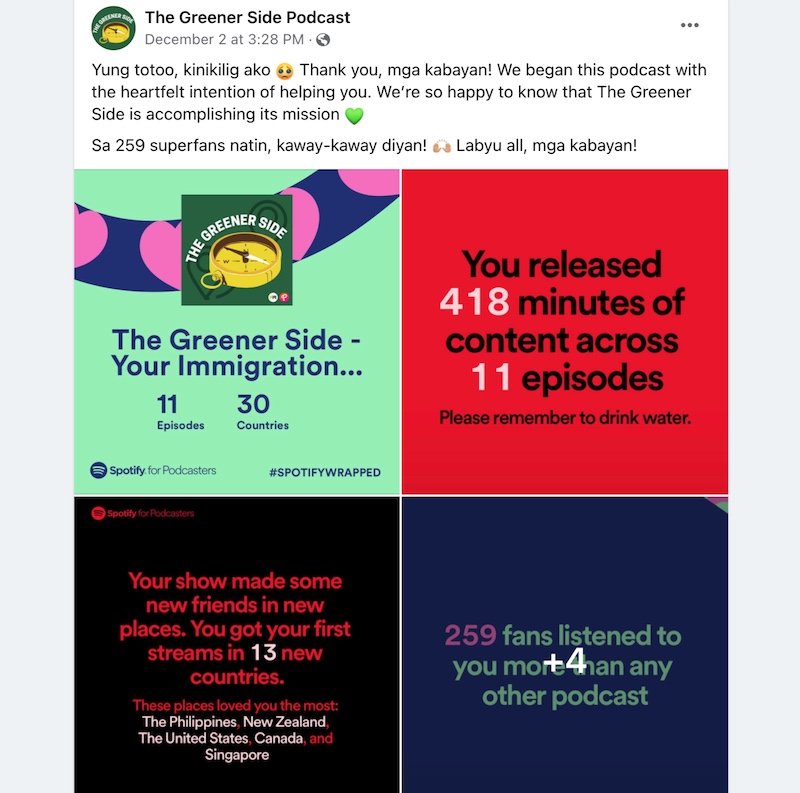 How is your own experience living in New Zealand so far? Especially given that it’s among the countries that continue to handle the pandemic well.

“New Zealand has one of the highest vaccination rates in the world; 85% of the eligible population are fully vaccinated, with the goal of making it 90%. We’ve had a bit of a hiccup late this year when COVID-19 came back; but because the majority of New Zealanders have been cooperative with mandates, life has once again returned to normal.

The country is also slowly opening up to the world! I’m looking forward to when it reopens borders to everyone who’s vaccinated without the need for quarantine.”

Also read: How Filipinos Can Spend The Holidays Abroad Without Feeling Homesick

FYI — The Greener Side invites both Filipinos living abroad and former OFWs who are willing to be interviewed. If you or anyone you know is interested, simply send them a message!

On the other hand, if you’re thinking of migrating in the future, we also have a list of cities you might want to consider. Thinking of moving to another country for further studies? Let these Filipino students’ experiences serve as your guide.

All images courtesy of Kring Lacson.