Train rides are anything but exciting — when you speak of the ones in Metro Manila, that is. But travelling Southeast Asia by train? That’s another story. Cheaper than flying and safer than taking a bus, riding trains allows you to see places at a leisurely pace, or simply, “slow travel” like you never have before. Honestly, how often can you sightsee, interact with locals, rest and travel, all the while saving money?

Why travel Southeast Asia by train

Southeast Asia offers the quintessential landscape for long-haul train trips. Most journeys run across open terrain saving you the trouble of changing altitude. Also, all countries in the region are visa-free for Philippine passport holders, making border crossing practically effortless. And, as the “local” way of travelling, it gives you the chance to experience certain cultures first-hand.

If you’re the kind of traveller who likes to take things slow and steady (not to mention, one who has the guts to ask your boss for lengthy vacation leaves), travelling by train is something you should definitely look into. When you’re ready, start with these train travel ideas in Southeast Asia, as recommended or experienced by fellow Filipino travellers!

Also read: How to Travel Around Southeast Asia Without Taking A Single Flight

1. Ho Chi Minh to Hanoi, by yours truly 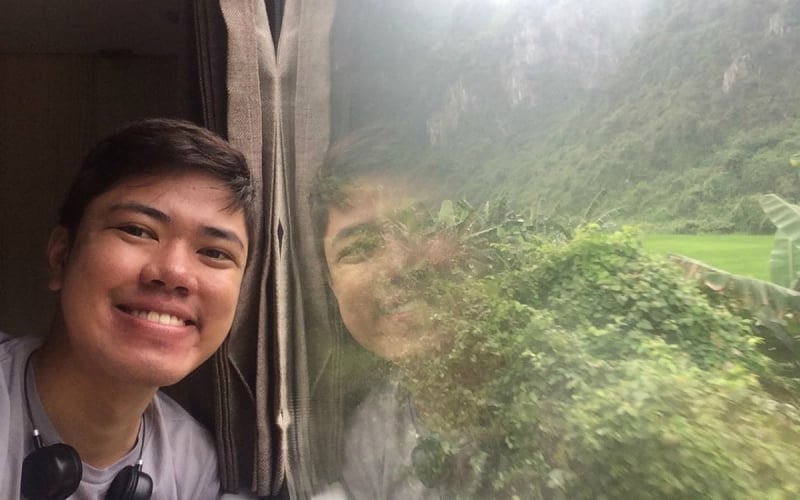 The very reason why I thought about writing this piece in the first place, the Vietnam train brings you to the two contrasting environments of this magical country — warm and sunny Saigon, and cool and gloomy Hanoi. The trip lasts somewhere from 30 to 36 hours depending on which train you take. As for me, I chose the 34-hour Ho Chi Minh to Hanoi train option where I stayed in a four-bed soft sleeper berth.

My favourite parts? Passing through the desert farmlands near Binh Thuan and the towering limestone mountains near Dong Hoi! There’s no WiFi on board, so it was a time for me to truly take in the scenery, work on my writing and devour every meal served without checking on Facebook every five minutes. I also had my own bed, a couple of sockets, a pair of slippers and a berth table, which I had to myself for most of the trip’s duration.

What better way to experience the famous Thai hospitality than on board one of the most coveted train rides in Thailand? Departing from Hua Lamphong Station, the Bangkok to Chiang Mai train journey takes about 13 hours. Like the Ho Chi Minh to Hanoi train, you can choose from a variety of cabin classes depending on your budget and preferences.

Travellers also have the option of booking day or night trips. Either way, you’ll be rewarded with stunning sightings of the Thai countryside while watching your windows get mistier and mistier as you approach the northern part of the country. “There’s something special about the sleeper train itself aside from the comfort it offers”, Cathy shared in a previous story. “As for the bed, it was compressible enough to make us sleep soundly”. Most importantly, you’ll feel right at home with the courteous and well-trained Thai staff who are more than happy to attend to your needs despite the language barrier.

Unlike most Southeast Asian countries, Myanmar remains highly undeveloped — exactly why it’s a fantastic destination for laid-back travellers to take on one of the world’s most scenic train rides. Although bumpy (at some point, you might even think the carriages would detach from one another), the eight-hour Pyin Oo Lwin to Hsipaw train offers magnificent views of unspoilt Burmese greenery.

According to Leah, who did the entire journey on her own, it’s the perfect opportunity to unwind from your travels. “You can listen to music if you want it to be dramatic — plus, I also got to observe and interact with the locals.” If you love heights (or plan to conquer your fear thereof), you’ll enjoy the Gokteik Viaduct crossing at 250 metres above the ground, which is perhaps the most unforgettable part of the adventure.

4. Jakarta to Yogyakarta, by Sel Rus

Covering a distance of 530 km, the Jakarta to Yogyakarta train journey is one experience you won’t want to miss when in Indonesia. From the moment you set foot in Gambir Station in Jakarta (only for Executive Class; Economy Class trains leave from Pasar Senen Station), you’ll be greeted by the impressive Indonesian National Monument. Ticket prices soar the closer you are to your planned departure, so Sel recommends booking one online as early as two months prior.

As for the train itself, expect well-maintained seats with lots of legroom especially if you’re travelling in Executive Class. Since tickets are pre-sold, you won’t encounter overbooked passengers standing along aisles or blocking doorways. The nine hours of travel will provide you with views of rich green paddy fields, sweeping banana and palm tree plantations, and quaint Javanese villages. “What amazed me were the houses (the roofs in particular) and the train itself because we don’t have it here”, Sel said. If you go hungry, simply walk to the catering car to order Indonesian favourites like Nasi Goreng and Bakso.

As far as land journeys in Southeast Asia go, the Padang Besar to Bangkok train is truly one in a million. Requiring a total travel time of 17 hours, this sleeper train is among a few in the region that involves crossing a border. You can even add in Singapore as your starting or end destination. However, be prepared to spare at least an extra half day and endure several transfers.

Similar to some of the trains earlier, you can book convertible seats for more convenience (don’t worry, the train staff will take care of the actual adjusting). Filipina traveller Cherry took the ride back in 2018 and was beyond pleased about her experience. “I loved the transfer of trains at Padang Besar the most”, she told us. “It is thrilling to see and experience the difference in the Malaysian and Thai railway systems”. Since it runs overnight, you can also skip booking a night of accommodation.

Also read: All Aboard! 6 Countries that Are Best Explored by Trains

Sure, travelling Southeast Asia by train has its cons too, like uncomfortable coach seats (if you’re on an even tighter budget) and the fixed travel times (if you’re in a hurry, this may not be a good idea), among others. Nonetheless, it’s an entirely different yet enriching experience that will spice up any Southeast Asia itinerary for Filipinos. And, thanks to these travellers, you have a good idea of which one to take (or avoid) first on your next “slow” trip outside the Philippines. All aboard!

Previous ArticleHuli Ka: 10 Excuses We’ve All Used to Get Out of a Trip
Next ArticleTravel Prevents Burnout! Here’s Scientific and Medical Proof