I swear Taiwan was never in my bucket list. In fact, I had a myopic view of the country – it has nothing but factories and electronics manufacturing plants and it is a destination for Filipinos who seek to earn a decent wage to give their families in the Philippines a better life. But times are changing and Taiwan now poses itself as an emerging tourist destination in Asia.

Also read: I Travelled Solo in Taiwan for 4 Days with an All-In Budget of Only ₱12k

Recently, budget airlines started to offer inexpensive fares to its capital city, Taipei. I read that in 2016, travellers from the Philippines who came to this little country in the north for tourism increased by 60% as compared to the previous year. I was intrigued. I must go to Taiwan.

Then in March this year, we were able to book a two-way seat sale for June travel.

Hurray. Taipei it is.

It was supposed to be visa-free for Philippine passport holders starting June of 2017 but due to some technical issues, the implementation is moved to September 2017. Unless you are travelling to Taiwan from September onward, you still need to secure an e-visa or a Travel Authorization Certificate (TAC). If you have travelled to OECD countries like South Korea and Japan in the last ten years, you can just apply for a TAC online for free. My friend has an expired Korea visa and I have a valid multiple Japan visa so we just secured a TAC. You may visit Taipei Economic and Cultural Office in the Philippines for more details.

On Tuesdays, Thursdays and Saturdays, Cebu Pacific has four flights to Taipei. Three of which are connecting from Cebu and one is a direct flight. All four flights arrive past 12 midnight. All the other days, there is only one direct flight which also arrives past midnight at Taoyuan airport. As for Air Asia, where we got our promo fare, it arrives around 2am in Taoyuan.

After exiting the immigration, the bus ticket counters are on floor B1 and the bus bay is right outside. In case you go hungry, there is also a convenience store on the same floor. There are several buses going to Taipei Main Station that operates even after midnight and they depart and arrive in 15-20 minutes’ interval. We bought our tickets at counter no. 7 for NT$125 (₱205) and boarded the Kuo Kang Bus 1819. There are airport staff at the arrival lobby, so for any questions, you may simply approach them.

The Taiwanese people are very friendly but language barrier here is quite a challenge. To avoid being misled by locals when asking for directions upon your arrival in the city, please try to note the location of the main exits in Taipei Main Station. Check your Google map; these are represented by M1 to M8. It will help you figure out the direction if you are to walk towards your hotel. Bus 1819 arrives at Kuo Kang Bus Taipei Terminal which is right in between exits M1 and M2. By the way, there is a footbridge a little past exit M7 if you need to cross to the other side. Do not fret, it’s pretty safe in Taipei even during wee hours.

If you are coming by Cebu Pacific or Air Asia, I suggest you book an accommodation close to Taipei Main Station. Unless you have a few dollars to spare for a cab to take you to your hotel. Why? From the airport, you will still travel to Taipei for about an hour, the MRT operates up to 12 midnight only and even the underpass will close thereafter. By the time you reach the city, it’s already 2 or 3 in the morning. I guess you would like to get a few hours of sleep before you start “Taiwandering” the following day. In addition, staying close to the Main Station is convenient for access purposes, especially if you’ll go on day trips. But, granting this is not the arrangement, at least choose a hotel that is close to the red line as it passes along main attractions like Chiang Kai Shek, Taipei 101, Shilin Night Market and Tamsui District. The red line also strategically intersects with other very useful lines like the Blue and Green lines.

Taipei is easy to navigate. Every signage in metro stations has English translation and they show the names of popular sights nearby so it’s easy to figure out the correct exit.

One Day Pass. This is similar to the Taipei Metro pass except that it is valid from first use until the subway service ends on the same day. Service usually ends at midnight. It costs NT$150 (₱250).

Easycard. You can use this anywhere in Taiwan – on the train, bus and even on vending machines. The card itself costs NT$100 (₱167) and you can buy and top up from train stations and convenience stores.

Our itinerary was easy and free. We have a list of what we want to visit but since there’s a lot to see and we only had three full days, Trix and I decided that we will go to places allowed by whatever time we have and just enjoy. 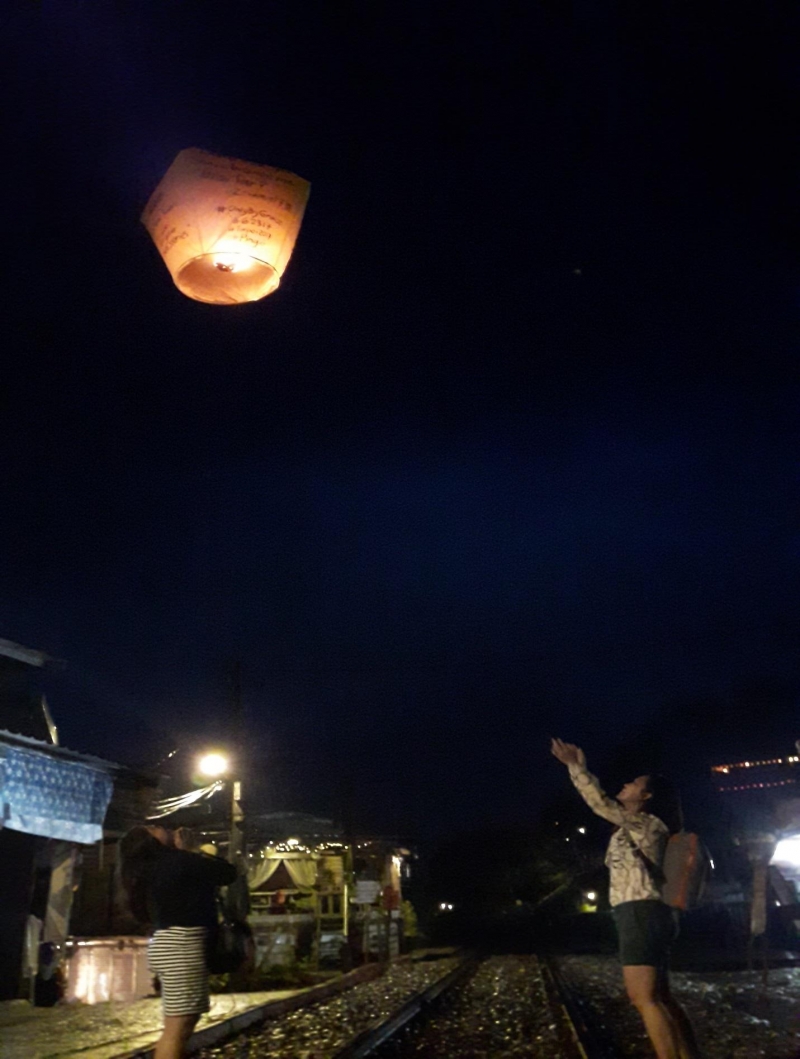 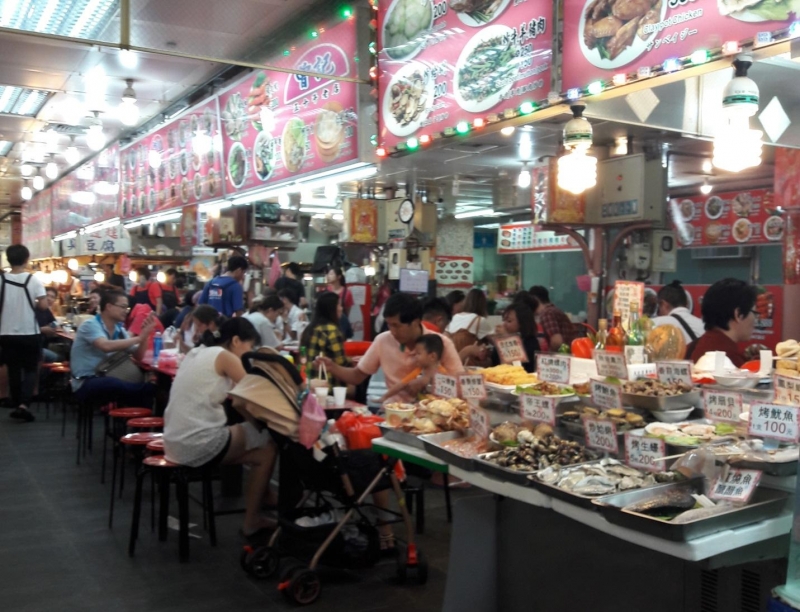 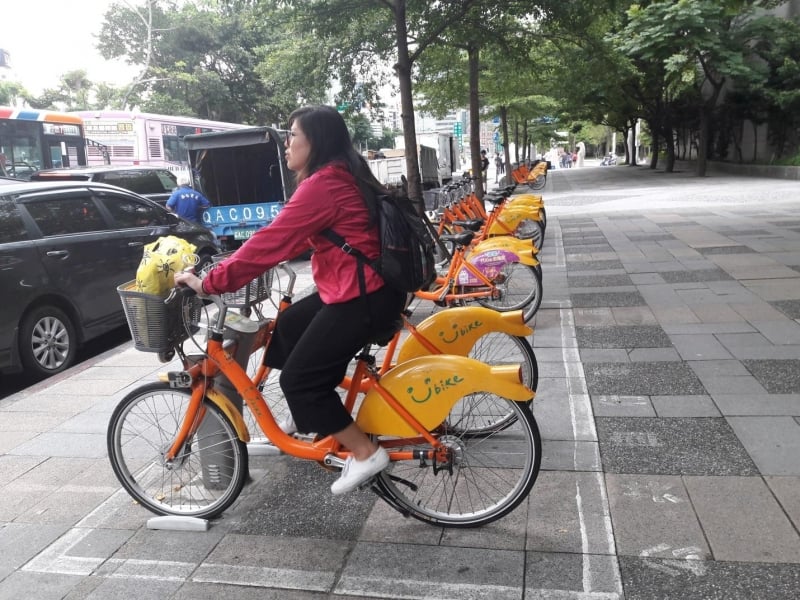 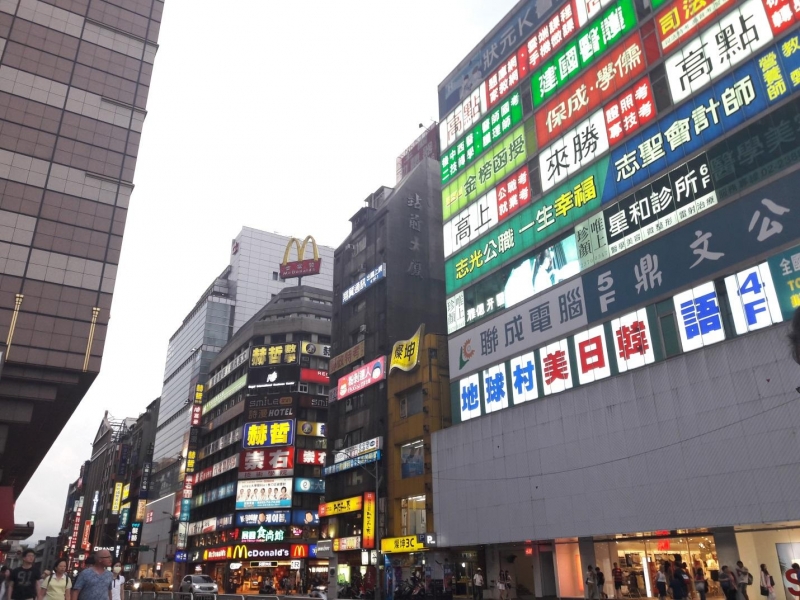 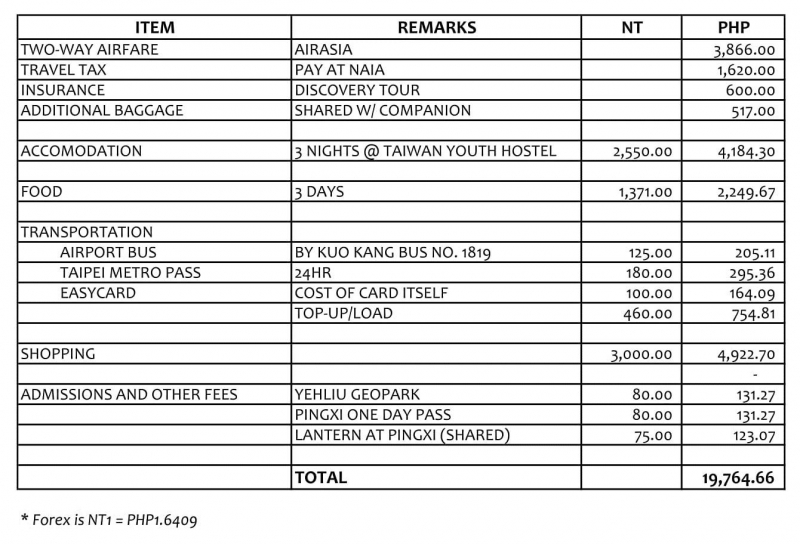 Forex. According to a shop owner at Shilin Market, there is no money changer in the city. Well not really. We found one inside a department store near Main Station on our last day. You can exchange your US dollars in the bank of course, but consider the time it will take you to do so. So please, bring NT dollars for your utmost convenience.

Luggage Storage. Our hostel kept our luggage for free after check out and we just came back for it at night before going to the airport. But if you have different arrangements, you may store your luggage in lockers found at train stations.

Best time to Travel to Taipei. The best months to travel to Taipei is from November to March. We were there in June when the rainy season usually starts. It had been raining a week prior to our trip but heaven’s favour is upon us and there was sunshine during our entire trip.

Language Barrier. A translation app comes handy at times. A lot of them know Hangul but only a few know how to speak English. In Ruifang, my friend was struggling to tell the lady not to put pearls on her milk tea but they could not understand each other. So I pointed at the picture of pearls at the counter and gestured my arms in “X”. And that saved the day.

Free shower at the airport. At the VIP lounge floor, there’s one cubicle where you can shower for free. Before our return flight to Manila, my friend took a quick shower here. Since I have a Citibank Premiermiles card, I was entitled to a complimentary dinner and use of facilities but I skipped dinner and just took a shower at the Premium Plaza Lounge. You may ask the reception if your credit card is qualified to avail of their complimentary services. Upon arriving at Taoyuan airport, there’s also free shower cubicles before exiting the immigration.

Taipei is a revelation. I recommend you visit it soon. It may not be as grand as the neighbouring metropolis to the north but it is a very charming city, and some parts of the countryside like Pingxi which remains unmarred by development will not disappoint your craving for wanderlust.