This is a PSA for anyone who finds themselves in the unenviable position of having to travel internationally to the Philippines at this time of the pandemic.

I booked a Philippine Airlines flight from Kuala Lumpur to Manila; however, because the government was only allowing a limited number of arrivals to NAIA per day, my flight was irrevocably rerouted to Cebu.

Tips for those flying back to PH during the pandemic

For anyone travelling at this time, one very crucial piece of advice I would like to share with you is how important it is to keep on checking the airline website and your email for any updates and possible changes to your flight. I was informed only three days prior that the flight would be rerouted; PAL changed the itinerary from Kuala Lumpur to Cebu, where I would need to stay two nights, before my connecting flight from Cebu to Manila (no additional charge for this, except for a ₱300 terminal fee that I had to pay to fly out of Cebu).

As an overseas Filipino (OF, but not OFW), I had to desperately contact the hotels in Cebu to ensure that I had accommodations during my stay there. The list of hotels can be found at the Philippine Airlines website, or you may contact the Department of Tourism facebook page.

Travelling to Cebu from overseas 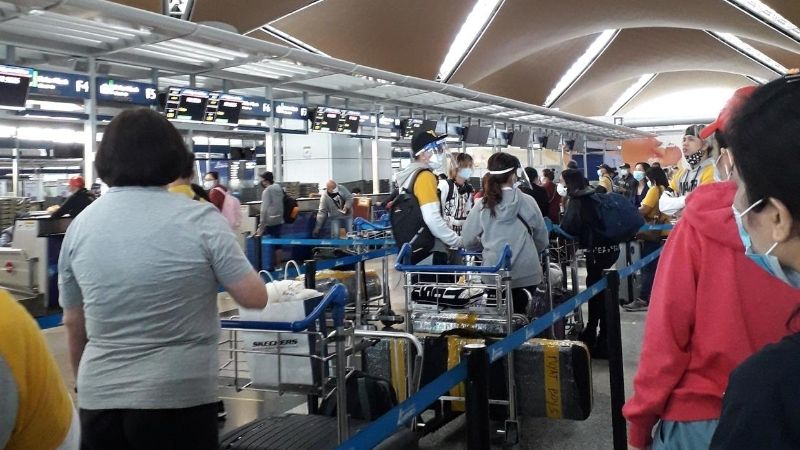 On the day of my flight, I arrived at Kuala Lumpur International Airport with the usual (less than) three-hour international boarding window. I proceeded to the Philippine Airlines counter, where they asked for my passport, flight itinerary, and proof of hotel accommodation. After dropping off my baggage, I proceeded to Immigration. This was the only time I had to take off my face mask and face shield at the airport. There was a considerable line leading up to the immigration officers, so when I finally finished and reached the gate, boarding had already commenced. 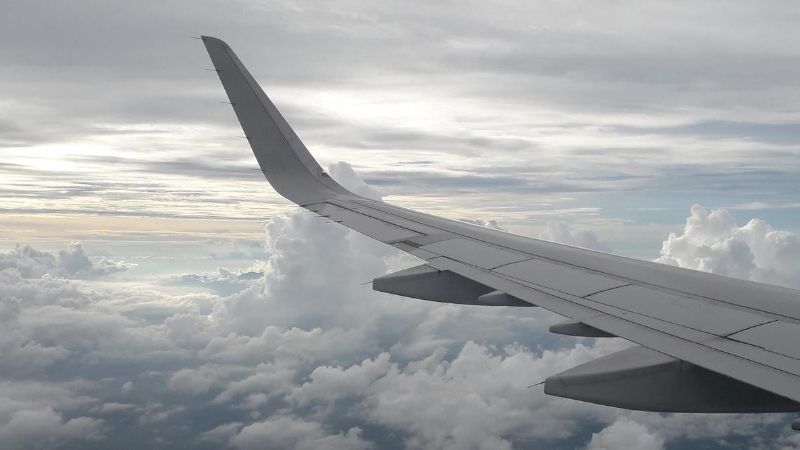 There was no social distancing inside the plane, unfortunately. This was quite expected though; at that time, it had been almost four months since the last commercial flight between the Philippines and Malaysia took off, as both countries locked their borders down due to the pandemic. Several flights scheduled months earlier had been cancelled, and a lot of stranded passengers had to be accommodated in the flight. Thus, there was no empty seat on the plane. I decided against eating the meal on the plane, although the ones seated beside me did eat when the meal was served. All airline personnel were in full personal protective equipment. 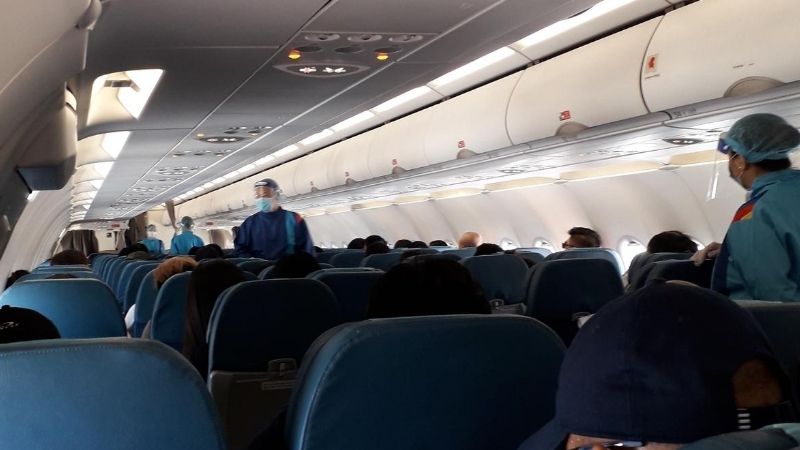 Upon boarding, and again once settled inside the plane, we were given a number of forms to fill out. Aside from the usual Immigration Arrival Card and Customs Declaration Form, there was a new Health Declaration Form and an 8-page IATF Declaration Form. Make sure your pen is ready! 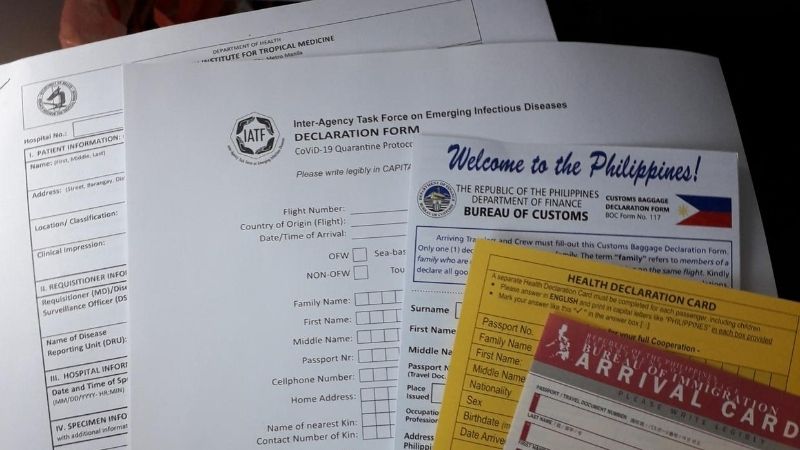 Arriving at MCIA amid the new normal

It was a short flight from Kuala Lumpur, and we arrived on time at Mactan Cebu International Airport. I was actually surprised at how streamlined the process there was! Upon disembarking, we were made to form two lines, where airport staff (again, in PPEs) counterchecked our names on a list and asked us where our final destinations were. 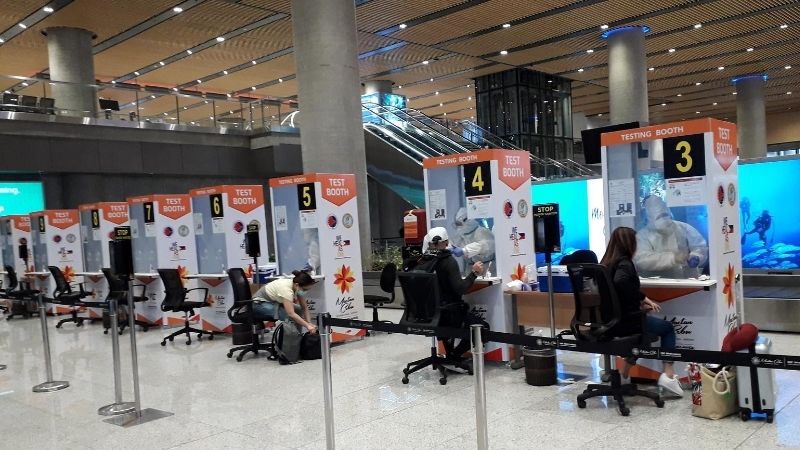 We then proceeded to an IATF desk, where we submitted the IATF forms. After passing through Immigration, we were then asked to go to the PCR testing area, which is on the lower floor opposite the baggage claim area. As a non-OFW, I had to pay for my PCR test, which cost ₱4,900. Just to clear up any misinformation, I am an active PhilHealth member, but I was required to pay for the test upfront; I was told that I can then reimburse it from PhilHealth afterwards (I have yet to do this).

After payment, I proceeded to the testing area, where several neatly arranged testing booths could be found. There were no lines here, and I was done quickly. Kudos to the swabber for very clearly explaining the procedure, which involved one throat swab and one nasal swab (through both nostrils). The specimens will then be sent to the laboratory (Prime Care Alpha, located in front of the airport), and results would be available anywhere from 24 to 48 hours after.

The wait for test results

After the test, I proceeded to pick up my luggage and found my hotel shuttle. I picked Crimson Resort, which is probably the best decision I made in this entire process. I arrived at MCIA at 5pm, and was settled in nicely at the hotel by 7pm.

At the hotel, I was not allowed to leave the comforts of my room until the results of my test were out — which was not exactly a bad thing! The room I stayed in was their most basic, but it had its own balcony, a comfortable king-sized bed, a television, a Nespresso machine and even a bathtub! Hearty meals that were more than filling were brought to my room three times a day, packed nicely in bento boxes. I felt safe and cared for during my entire stay; this truly is value for money. Crimson Resort is definitely the epitome of the new normal in the hospitality industry.

My PCR results came out 24 hours on the dot. Such efficiency! I finally arrived in Manila from Cebu, hassle-free, two days after my original flight date, after which I simply proceeded to head home.

Also read: My COVID-19: Steps for Non-OFWs Travelling Back to the PH

My thoughts on travelling to Cebu  from overseas during the pandemic

I have to admit: At first, I was really irritated about being rerouted to Cebu, instead of just going directly to Metro Manila. But after my experience of travelling to Cebu from overseas during the pandemic, it made me realise that it may actually have been a blessing in disguise. I was able to receive my test results quickly and arrived in Manila after a mere two days, instead of the usual three to five days waiting time for the test results to come out if taken at NAIA.

So for those non-OFWs heading home to the Philippines, travelling to Cebu and then Manila is a valid option. It is best to be prepared beforehand, and book all your transportation and accommodations prior to your arrival, in order to minimise your time at the airport. Hopefully, this will help keep you safe, even if you need to travel in the middle of a pandemic. 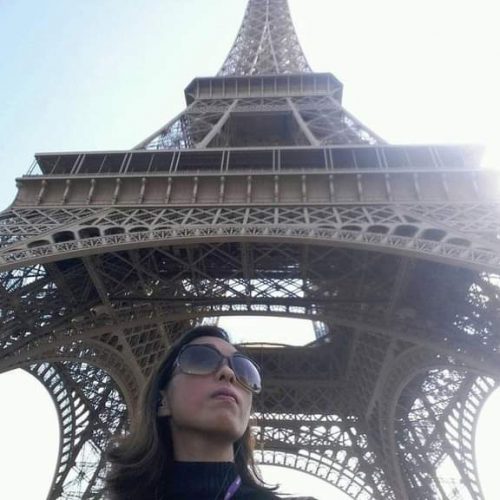 Sabrina is a sea worshipper stuck in the city. She is a physician by need, but a traveller by heart.