The Great British Festival 2016: Experience the Best of Britain in Manila and Win Cool Prizes

It’s the last day of the #GreatBritishFestival in Bonifacio High Street BGC! Don’t miss your chance to win FREE flights to the UK courtesy of Etihad Airways while enjoying the best of Britain!

Admission is FREE so invite your family and friends! 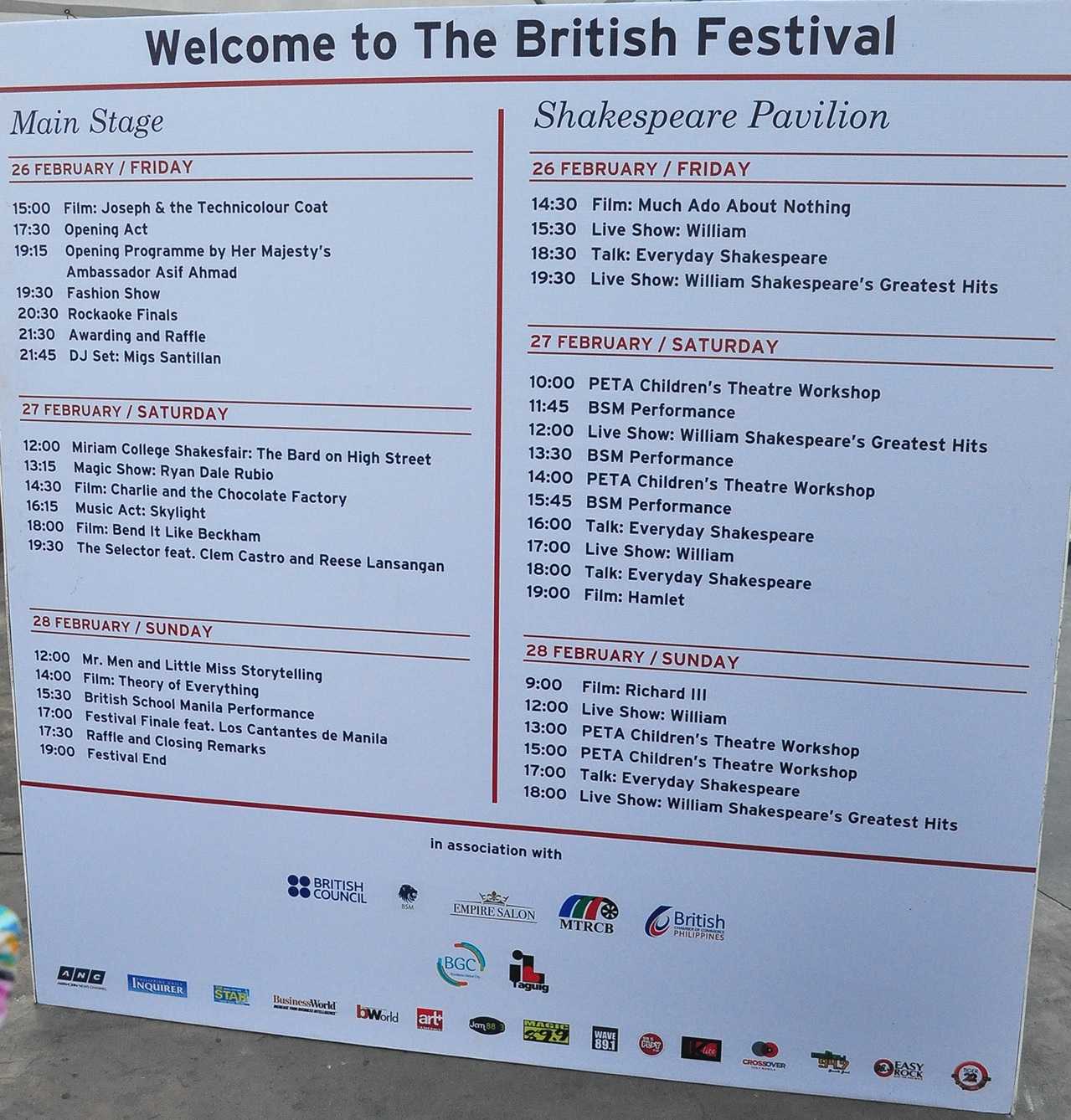 See more of what you can experience at the festival by visiting TripZilla Philippines Facebook page.

British Ambassador Asif Ahmad officially welcomed everyone to the 3rd Great British Festival in Manila. “This event is our biggest yet, involving around 80 companies with links to the UK. Since we started our GREAT campaign three years ago, we have had positive feedback from Filipinos. A record number have come to the Festival. More successful visa applications by tourists. We want to see Pinoys choosing to study in the UK too. The British Festival offers a small taste of all the great things that Britain offers. Join me and my Embassy team as we bring you bigger and better British experience in Manila.”

The ambassador also encouraged everyone to visit the UK, his homeland. “Visit Britain and immerse yourself in our rich culture and heritage. The Shakespeare Company has begun a run of all 36 Shakespeare plays, to be performed over the next five years. You can watch performances at Shakespeare’s Globe, a replica of the original Elizabethan theatre. Or visit one of over 2,500 museums, most for free. Britain is one of the most exciting and thriving cultural destinations in the world. We offer a captivating blend of old and new, avant-garde and traditional, with a vast range of attractions and experiences free to enjoy.”

Visit TripZilla Philippines Facebook page to see more of what awaits you at the #GreatBritishFestival 2016.

17 Feb 2016: Now on its 3rd year, the #GreatBritishFestival will once again showcase the best of Britain this coming 26-28 Feb 2016 at Bonifacio High Street, Bonifacio Global City, Metro Manila.

What to expect from this festival? Loads of fun, exciting treats, interactive games and pulsating programs! Challenge yourself to complete a festival passport, catch activities at the Shakespeare Pavilion, chat with British alumni at the Education Pavilion or enter the Etihad Airways social media contest for a chance to win round trip tickets to the UK courtesy of Etihad Airways! How awesome is that!?

Wait, there’s more! You may also enjoy an array of food, fashion, cars and other great displays of British excellence that will occupy the whole stretch of Bonifacio High Street. Plus, you’ll be able to watch live performances from the award-winning a capella group Los Cantantes de Manila, Rockaoke contest finalists and other musical acts. Fashionistas, you’re in for a treat at the fashion show with top British brands directed by Robby Carmona.

For family bonding moments, you may sample delectable British food and drinks while watching entertaining movies. Let your children participate in kid-friendly activities like the magic show, face painting and musical numbers by talented British School Manila students. Invite your friends on an Escape Hunt mystery game and channel your inner Sherlock. And don’t forget to check out the newest additions at UK in Miniature like Giant’s Causeway and Stratford-upon-Avon.

There’s definitely something for everyone!

British Ambassador Asif Ahmad is inviting everyone to join the three-day celebration. “Since we started our GREAT campaign three years ago, we have had positive feedback from Filipinos. A record number have come to the Festival. More successful visa applications by tourists. We want to see more Pinoys choosing to study in the UK too. The British Festival offers a small taste of all the great things that Britain offers. Join me and my Embassy team as we bring you a bigger and better British experience in Manila.”

“This event will be our biggest yet, involving over 70 companies with links to the UK. We’ve made sure there is something for everyone to enjoy. You’re all invited to join the festivities and see why the UK is a great place to visit, study and do business,” said Ambassador Ahmad.

Organised by the British Embassy and its partners, the third British Festival in Manila will be an even greater showcase of the creativity, innovation, culture, heritage and knowledge that spell Britain’s success in fashion, music, sport, education and design. For more information, like and follow the British Embassy Manila on Facebook, Twitter and Instagram.

Admission is totally FREE! So grab your friends and loved ones, and have a GREAT time at this one-of-a-kind British Festival in the Philippines!

Previous ArticleHow I Travelled Solo in Siem Reap for 2 Days with Only PHP 7,650
Next ArticleMy Unusual Date Trip to Iloilo for 3 Days
Comments (0)