When BTS opened personal Instagram accounts on 6 Dec 2021, fans went wild. The past days since have been a frenzy of FOMO — we followed, turned notifications on, and refreshed our feeds to make sure we never miss a post or story.

It’s been over a decade since the social app was founded, and years since it amassed more than a billion users. So, we’ve found it quite charming to observe the biggest boy band in the world learn the ropes of double-tapping for hearts, uploading posts, and sharing stories — just now, amid the confusing period of all-things-Facebook transitioning to Meta. On the other hand, while most of us are already overfamiliar with the “Insta vibes,” we still can get a lot of Instagram tips from each of the BTS members. (After all, they already have more followers than us.)

What is the vibe of Instagram? BTS, come be our teacher 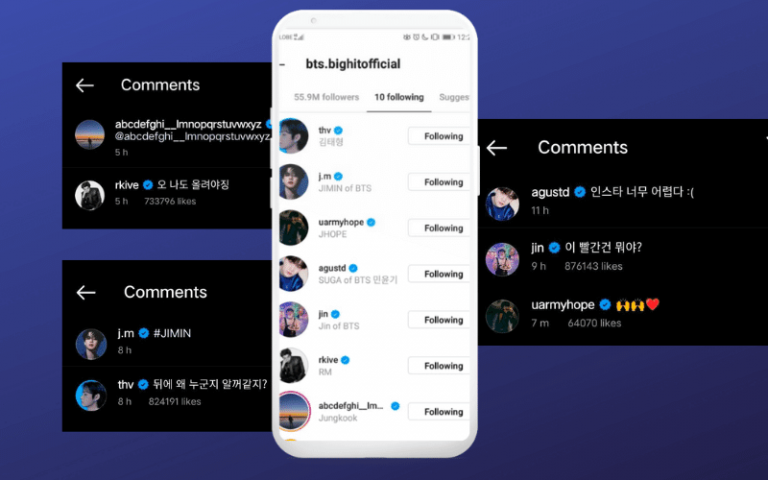 Few of us have the privilege of choosing our names, but we can all choose our Instagram handles. That is, of course, as long as they aren’t taken. Choosing a handle is one of the first steps of creating an account; it’s among the major social media elements that reflect our online personality.

A few years ago, everyone cool seemed to change their handles to their singular first name. How they did it, we’re not sure, but we can only guess it involved haggling with connections.

Honestly, we’d expect that BTS could do the same. But remarkably, only Jin went for the classic nickname handle. The rest chose different usernames; most discussed on the interwebs being Jungkook’s witty @abcdefghi__lmnopqrstuvwxyz. In case you don’t get it, the maknae spelt out the English alphabet, leaving the letters “j” and “k” blank, which together form his nickname, “JK.”

Another handle that caught our eyes was J-Hope’s @uarmyhope, a wordplay of “ARMY” and his iconic “You’re my hope” line. He’s our hope and ARMY is his hope, after all.

Since it’s the boys’ first time to use Instagram (or so we think), a few of them admitted they were experiencing difficulties. It was all good for V, as he’d successfully shared photos and selfies — even a story with a filter! — until he accidentally followed BLACKPINK’s Jennie. He then retreated to WeVerse to ask ARMY, “Is there a way to get rid of this?… It’s a scary app.”

Jimin joined him on the fan community app to announce, “You’re right, Insta is hard. That’s the truth. What you guys are thinking is correct.” He added, “I would be better if I had used social media more before.”

Instagram hasn’t been easy for the only Gen Z of the group, either. Jungkook shared an “unaesthetic” screenshot of his Myers-Briggs result on his feed. He’s since deleted the photo, telling ARMY, “People told me you’re not supposed to upload these kinds of posts. What is the vibe of Instagram then?” Probably after finding the answers, Jungkook reposted the screenshot in his stories, and even added it under a highlight. Way to go, Kookie!

And of course there’s SUGA. After deleting his first photo where he forgot to turn off the comment section, he posted a red square captioned, “Instagram is so hard. :(” Just imagine going through learning curves for the whole world to witness! Still, BTS has been overcoming their “new normal” in technology the BTS way: with grace, candour, and the most wholesome humour. On SUGA’s photo, V commented, “I suggest you go to YouTube and watch some how-to videos… It’s helpful and makes it easy.”

3. Don’t be afraid to flaunt your personality

Within 24 hours of opening their accounts, each member had already posted at least a couple of photos on their feeds. Remarkably, J-Hope has already found his own “aesthetic” — polaroid photos that capture his cool vibe. He seems to be following this theme, which we’re all here for. We can’t wait for more of #HopeFilm!

Meanwhile, RM is going all out on namjooning. The BTS leader has posted photos and stories of parks, cafes, museums, and other picturesque sceneries. Enter Jin who’s been uploading photos of the different sides of him: his soft, pigtail-wearing self; his forehead-revealing-Super-Tuna self; and his latest, a photo of him in traditional wear, showcasing his actor self. Worldwide Handsome surely knows how to love himself!

4. Love yourself, and others as well

Social media saturation has inevitably led most of us to curate our lives to look like we have it all together. But the septet, through their interactions with one another, remind us of what the platform is all about: connecting with our loved ones. So don’t forget to drop hearts — or even a literal heart emoji, a la Jin.

Be your friends’ biggest fans! You don’t have to like all their photos within seconds as J-Hope does, but at least stay supportive. Remember that Instagram isn’t supposed to be a competition; it’s a place to express yourself and spread love to the world. (As Jimin puts it, “luv u all.”)

Also read: Instagram Tips: How to Pose for Travel Photos When You’re Awkward

But who makes these rules, anyway? Unless you’re planning to make a living out of Instagram, why bother sticking to all these? Post what makes you happy. You’re free to post photos of your cute dog or your favourite colour or even a selfie you’ve already posted elsewhere. You don’t need to worry! You don’t need permission to post.

It hasn’t been long since RM, Jin, SUGA, J-Hope, Jimin, V, and Jungkook joined Instagram, but we’re definitely excited for how else they’ll be enjoying the app. Borahae, BTS!