Philippine Passport holders, it’s time for another round of happy dancing because The Republic of Kazakhstan officially listed travellers from the Philippines as visa-free!

Curious about Kazakhstan? Since it hasn’t exactly been on our radar, here’s a rundown of what you can look forward to!

There are many picturesque attractions in Kazakhstan and most are breathtaking gems in the wilderness. That said, this country’s historical landmarks are a sight for sore eyes and have deep social relevance that might pique your interests as well. List these attractions down!

The Kaindy Lake is a mountain lake which was formed after an earthquake and a landslide in 1911. You can find it at the Tian Shan Mountains close to the city of Almaty. Kaindy Lake is famous for its evergreen landscape which surrounds the crystal clear water. Beneath the surface of the water are flood-surviving trees that have not decomposed since the lake was formed. The view makes for a unique scene of a mystical underwater forest!

Yet another stunning lake you should visit is the Issyk Lake which gives you a scenic view of lush mountain forests against clear turquoise water. They say that the water presents various stunning shades of blue at different times and seasons. Originally formed 8,000 years ago, the lake has gone through several natural changes and disasters, which forced the locals to intervene in order to salvage this natural wonder. Now man-made, Issyk Lake is twice as small than its original form, but still attracts plenty of tourists to date! 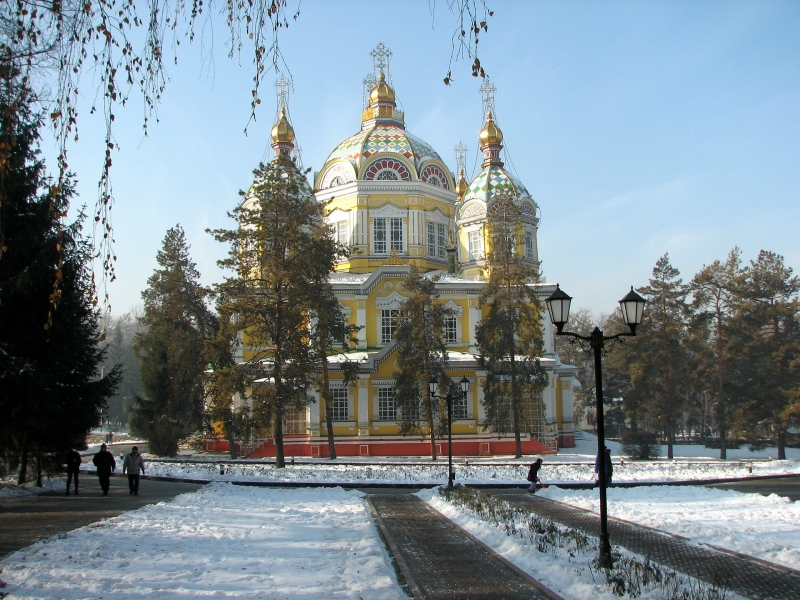 Found at the Panfilov Park in Almaty, the Ascension Cathedral bears a striking facade of kaleidoscope-inspired colours. Construction of the cathedral began in 1904 and is where the country’s Orthodox community attended mass until 1927. Under the Soviet regime, it served as a venue for public functions instead, until it was renovated to its original state in 1976. This cathedral is said to be one of the tallest wooden structures in the world. Its interiors consist of materials from Moscow and Kiev, while the icons were painted by Kazakhstan’s local artist, Nikolay Gavrilovich Khludov.

Also read: How To Get A Russian E-Visa For Philippine Passport Holders

Palace of Peace and Reconciliation

Found in the capital city of Astana (newly named as Nur-Sultan), the Palace of Peace and Reconciliation is Kazakhstan’s most important cultural and religious monument as it represents all the world’s religious faiths, which you’ll see throughout its interior designs. It also features educational facilities and an opera house that can seat up to 1,500 people. What’s most striking though, is its outer facade which takes the shape of an enormous pyramid that’s said to come second only to the great pyramids of Egypt!

There are plenty more sightly attractions in Kazakhstan to discover aside from what we’ve mentioned. Explore more natural wonders at the Big Almaty Lake and Charyn Canyon. Understand more of the country’s agriculture in The Last Wild Apple Forests and go on a foodie’s shopping experience at the Zelionyj Bazaar. Now that Kazakhstan is visa-free, open your heart to new adventures and you might just find a new favourite destination.

Plan your travels as early as now before everyone else scrambles for a ticket to Kazakhstan! Don’t forget to join our group, Flight Deals — Philippines, for the latest airfare promos!

Previous ArticleTravel Fund 101: 9 Ways I Save Up For My Next Travel
Next Article10 Things to Do in the Philippines: A Balikbayan’s Checklist