10 Restaurants in Binondo for Your Next Food Crawl

I never get tired of going through restaurants in Binondo. I’ve been doing food crawls around the world’s oldest Chinatown for a decade at least; and lately, I’ve seen a lot of people do the same on most weekends. You’ll see the lines outside these restaurants: Some in search of a hearty meal, others looking to vlog their experience — or both. As a long-time patron of the district’s classic cooking, it excites me that delicacies in Binondo are growing in popularity.

While almost all restaurants in Binondo have something that anyone will like, there are a select few that are just timeless. These restaurants are what made Binondo a destination for good food for almost any generation. So when you plan your food crawl in the district, make sure to visit any of these places, at least for a dish or two.

Restaurants in Binondo that you can’t miss

This noodle shop has multiple branches scattered throughout Binondo with one thing in common: their consistently delicious noodles. At Lan Zhou Lamien (or simply Lamien, as loyal customers call it), freshly hand-pulled noodles are served in big bowls of broths of your choosing. How do you know they’re hand-pulled? Just watch their chefs in action through the kitchen’s clear glass windows. Witness them stretching, pulling, and slamming heaps of flour on metal counters as they turn into firm noodles beside cauldrons of simmering broths.

Try their best seller, Beef Lamien, noodles served with braised beef pieces and a handful of vegetables in beef broth. They also offer steamed dumplings, which I think are very underrated. The bite of freshness coming from steamed garlic chives combined with the richness of pork filling inside a chewy rice wrapper goes very well with their broths. Be sure to dip it in Chinese black vinegar garnished with freshly cut ginger.

Ongpin Street is a treasure trove for foodies who dare venture the streets for restaurants in Binondo. If you want to keep your energy up while scouring to and fro its streets, Shanghai Fried Siopao is a great pick-me-up that is filling and tasty. If you want to save some space for more treats during your walk, don’t eat more than one! (But I can’t blame you if you do.)

These lightly pan-fried meat buns are a joy to bite, combining the light, fluffy dough with a seemingly toasted bottom that is almost close to a shell. Once your mouth reaches the filling, you’ll discover a pork and vegetable stuffing that is fresh, savoury, and tender all at once. The flavour is, honestly, quite sophisticated for a meal you can eat while walking for a few minutes.

While it isn’t technically a restaurant, you’d think that its popularity should warrant it as one. You don’t even have to worry if your bun will be warm because their turnover is so fast that the buns don’t have time to rest. They are that good.

Also read: 8 Heritage Restaurants and Cafes You Can Find in Metro Manila

Sincerity Cafe and Restaurant has been around for so long, and it’s easy to understand why. Their namesake fried chicken is life-changing; it introduces itself bluntly, too, as it’s crispy from the touch, down to each bite. But overall, its revered reputation comes from its fragrance — it smells like fried chicken, but definitely richer and more flavourful than the ordinary.

Herbs and spices, like Chinese four-herbs and star anise, are just some of the few components that make Sincerity fried chicken stand out from your average fast-food chicken. They add a unique dimension to the already crispy and tender dish that is just refreshing to the palate. If you want something a bit more exotic, Sincerity also serves a mean fried frog legs dish. You know what they say: It tastes just like chicken.

If you are looking for healthier options on this list, New Eastern Garden Restaurant has you covered. While they still sell meat-based dishes, their best seller is their traditional Chinese vegetable lumpia. Made with a variety of fresh, crunchy vegetables, ground peanuts, and crushed seaweed, these spring rolls are surprisingly packed with flavour inside a simple lumpia wrapper that plays very well with the crisp texture of the filling. A sweet, savoury sauce enhances the already delicious vegetables. Hot sauce is also a nice addition if you want a kick of spice to your lumpia.

An open-air restaurant beside a drainage waterway may not appeal to a lot of people who are far from Binondo, but the long queues continue to be a testament to Estero Fast Food’s undeniable popularity. Why? The quality of the food cooked in this establishment could rival any high-end restaurant — and for a fraction of the price to boot. The tradeoff is definitely a steal.

Being a collective of food stalls help with the variety, too. Want something light, something that you could enjoy with a beer? Go for stir-fried tofu and fish, pansit, and crispy fried frog legs. What about a full meal to cap the day with friends? Order a hearty serving of beef hotpot, steamed lapu-lapu, cuts of lechon kawali or their famous lemon chicken. Whatever your cravings are, Estero Fast Food has an answer… and, all of them are delicious.

As the name implies, Uno Seafood Wharf incorporates seafood as their best-sellers. I remember the first time I ate their scallop fried rice; it was a succulent party in my mouth. As with many Chinese restaurants that offer seafood, expect only fresh ingredients from them — fish included.

Now, it can be costly to eat in a seafood restaurant. But chance upon their seafood-all-you-can promo, and you might just get to indulge in some of the best steamed suahe that Manila has to offer! 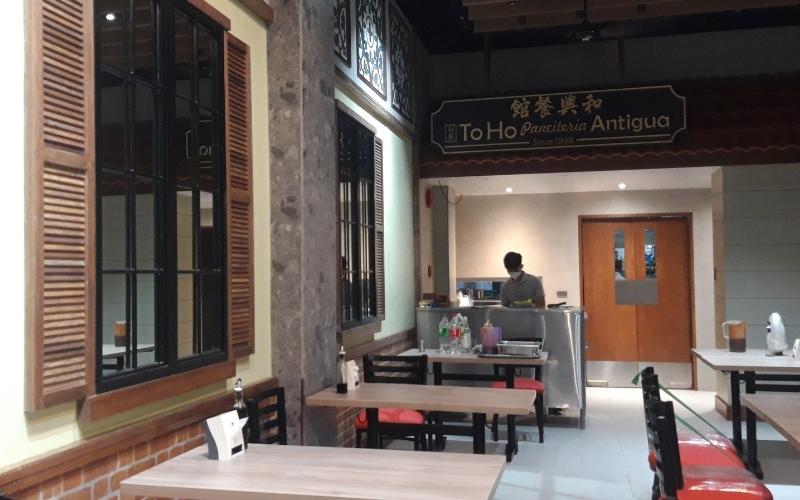 Another gem found in Escolta, New To Ho Food Center is one of the oldest restaurants in the Philippines. Founded in 1866, this establishment was allegedly frequented by our very own national hero, Dr. Jose Rizal, as well as Philippine presidents of old. Its history alone should warrant this restaurant a spot on your food crawl.

On that note, if Rizal were alive right now, I would commend his taste. Every dish served in New To Ho Food Center is downright delicious. From its simplest rice topping meals, fried spring chicken, steamed seafood, stir-fried vegetables, juicy lechon, delectable stir-fried noodles — you name it. No wonder it has stood the test of time, with flying colours up to this day.

Also read: 12 Monuments Around The World that Celebrate Filipino Heroes

While Masangkay Street is far from Ongpin and Escolta, it is still a part of Binondo. Recently, this area has been enjoying an influx of new food establishments. One of the earliest establishments that marked this rise was Causeway.

Causeway has a little bit of everything that makes Chinese cuisine great. While there isn’t a particular speciality when it comes to their dishes, their simple but inspired cooking makes their meals sumptuous. Their wide range of dim sum is also a draw; try out their radish cakes, hakaw, and kuchay dumplings. They may also have discount promos for their dim sum during select hours of the day, so keep an eye out for those, too! 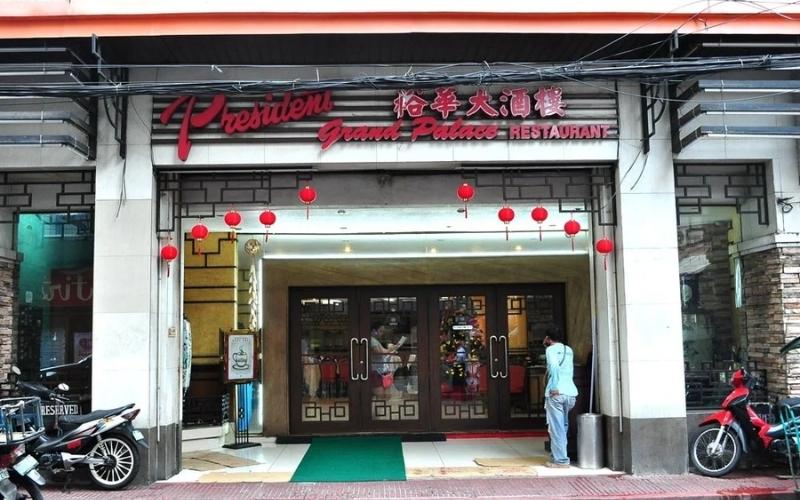 In the middle of the long stretch of Ongpin Street lies a restaurant so bright that it would be impossible not to take a peek when you pass by. The prominence flexed by President Grand Palace Restaurant isn’t just for show, however. What rests inside is a premium Cantonese menu that will only use the best ingredients for their dishes.

Some of their dishes, especially their best-sellers, are priced at a premium. Binondo is an economic hub of Manila, after all. But, take the time to be strategic with your order, and, just maybe, you can feed a small group with their succulent roasted duck topped with its luscious sauce.

Actually, pick any of their meats — from their Hainanese chicken to their lechon macau — and you just might forget your name when you take a bite, but you’ll be begging to remember its taste.

One of the newer restaurants in Binondo, The Grand Buddha Cafe prides itself on its speciality: the claypot rice. Their beef tendon rice, to be exact, is cooked to perfection that you wouldn’t even know that tendons are supposed to be tough and chewy. The protein melts on the first bite as its sauce mixes well together with the rice. It is nourishing at every bite.

Situated atop the Eng Bee Tin flagship store, this restaurant has applied modern interiors but with the same traditional taste that Binondo is known for. Being a part of the Eng Bee Tin chain of restaurants, it’s unsurprising that they serve incredible desserts here. You may want to buy a few packs of hopia before you go home, but you should try the absolutely decadent cream cheese naicha before capping off your food crawl.

While restaurants in Binondo have come and gone (our family still misses iconic places like Savory Classic and Wah Sun), the tradition of delicious Chinese cooking is still strong in the world’s oldest Chinatown. It still continues to inspire restaurateurs to create their own establishments. It still attracts patrons who’ll return to eat and enjoy its distinct flavours. And with these in mind, it is undeniable that the generations to come will keep restaurants in Binondo thriving and alive.

Previous ArticleClarin Bridge: The Latest Eye-Catching Landmark in Bohol
Next Article12 Things to Do in Baguio — the Summer Capital of the Philippines