What Travelling With a Hitchhiker Taught Me

There’s definitely an excitement, nervousness and a sense of gratification that comes with travelling with a hitchhiker. I had the benefit of going through all these motions when I met with Joël, a former colleague from Hanoi, who is also a photographer, recent masters graduate and aspiring professional traveller. And you’ll never guess where we were when he was hitchhiking this time…

This bustling metropolis is constantly overflowing with locals and expats dressed in sleek business attire, cars that you could very well trade for your own island in the Philippines, glamorous shopping malls, and cutting-edge restaurants. No one in their right mind would take in a couple of strangers in slimy shirts and monstrous backpacks at zero cost, it seemed. Especially so in the midst of the anti-China protests that continue to take place in the city (We actually got to join one of them).

But Joël, a pastor’s son from a small island in the Netherlands, begged to differ. He had the valiance of an ancient gladiator willing to battle all odds, the spirit and cleverness of a 10-year-old always finding ways to go on his next escapade unto the streets, and the conviction of a seasoned lawyer — he does not take no for an answer.

I mean, he’d been a hitchhiker for over five years, hailing vehicles from cars to trucks in nearly 50 countries, including Iraq and Iran. He can and will make everything work, one way or the other. Just as he spontaneously booked a one-way flight to Asia just hours after his masters graduation from the University of Twente to join me in my Hong Kong holiday. And, to start a new hitchhiking trip that would bring him back to the Netherlands in six months.

Before you wonder (Hi mama!), no, I did not actually hitchhike with him, at least not successfully. But spending 24 hours with him for nearly a week — not just in Hong Kong, but in neighbouring Macao, too — gave me an invaluable opportunity to put myself into his shoes and possibly those of his fellow hitchhikers. Let’s just say I didn’t come home to the Philippines empty-handed… or more specifically, with an empty notepad.

Also read: Travelling With a Photographer — What’s It Really Like?

It’s not just about getting free rides

Cambridge describes hitchhikers as “someone who travels by getting free rides in someone else’s vehicle”, which is perhaps the most straightforward way to say it. I know what you might be thinking — they’re just a bunch of freeloaders who have nothing better to do with their lives than be a shipload to other people. Sorry to burst your bubble, but no.

It’s true, hitchhikers do get around without paying for bus, train or taxi fares. They make do with gregarious personalities and by offering well-meant company to people who might need it. More importantly, they get free rides with the knowledge and approval of those drivers who could just as easily send them to the nearest police station for being total “rip-offs”.

In the case of my 26-year-old companion, he has his sunny outlook, a smile that can launch a thousand ships and a genuine willingness “to meet everyone on this planet” as his Instagram bio says. He hitchhikes his way around the world to save on money, yes. But, he also does it to prove that there really are things left in this world that money can’t buy — authenticity, trust-filled relationships,and the pure kindness of people who simply want to offer a hand without asking for anything in return.

He lives for the unexpected. His only expectation from his trips is to live a life different from his own in each place he wanders into. He’s proven these things many times before, and he’s certainly not close to stopping anytime soon.

In my six days of travelling with a hitchhiker, I’ve made more friends and “indirect” connections than I did from spending three weeks in Nepal, a popular and very social backpacking destination in South Asia. Day after day, I watched Joël with a careful eye as he’d make conversations with practically every soul we’d come across on the streets, inside elevators and restaurants — from the Pakistani migrants in Sham Shui Po and the Filipino servers in Tsim Sha Tsui, to the local protesters in Causeway Bay.

He’s his own radio show, and everyone was always invited to be his guests. “How can you even deal with this guy?”, a fellow tourist joked to me after he’d been talking with Joël for the entire 45-minute bus ride to Lantau Island from Kowloon.

“Begpackers” and hitchhikers make two potentially interchangeable concepts often associated with Westerners. While one heavily relies on passersby to throw pennies into worn-out caps or improvised donation boxes, the other relies on pure generosity of people without getting in the way of another, especially that of a less privileged person in a less developed country. Hitchhikers like Joël know better, especially when it comes to handling precious resources and the privileges that go with them.

“I just hate wasting food”, snapped my companion after seeing a group of customers leave two bowls of deliciously looking viands almost untouched inside a Pakistani-Filipino eatery. “What are you going to do with those?”, he asked the two staff members who were just starting to sweep the table clean. “Just throw them away?”. They nodded, albeit obviously taken aback by the questions.

Before they could say anything, Joël had gestured to bring the bowls to our table. They were happy to do so. In a few seconds, we each had a free, still warm, serving of Pakistani roti in front of us, which we started to eat right away. 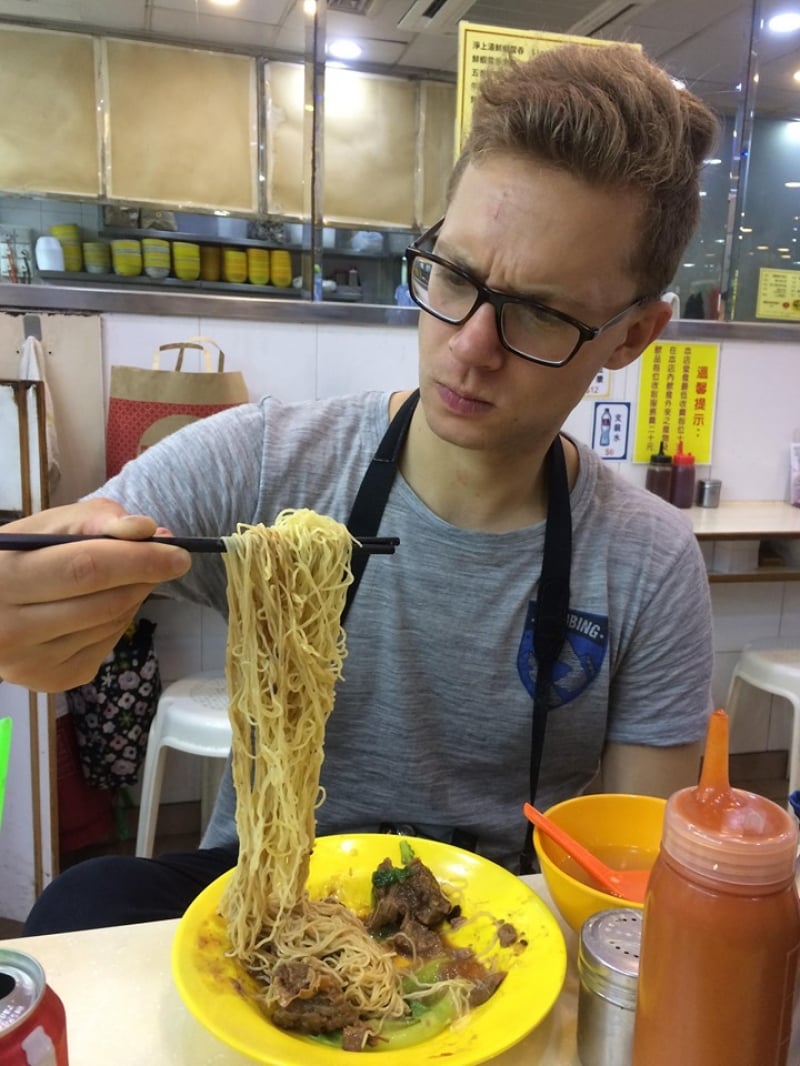 “Man, this guy can eat”, I thought to myself at that moment, recalling how much food we’d already devoured just a few minutes ago. As awestruck as I was, nothing could hide the admiration I had for his little act. He nearly finished his serving before I could even recover from my first bite. Knowing I detested spicy food, he was kind enough to finish mine shortly after he had cleaned his own bowl.

“When you waste food, you’re disrespecting the hard work of the people involved in preparing them – the cooks, the farmers, the vendors, everyone”, he reasoned. I asked him if it’s a habit he happened to pick up from hitchhiking as a form of survival. That, and from his own home in the Netherlands, he answered. It was one of the lessons his mother taught him from when he was a lot younger.

There are risks worth taking

The days of a hitchhiker are spent walking long distances, through cities and countrysides, mostly without having a specified timeline. Their lifestyle could not be any more spontaneous and farther away from what I regard as true, unmistakable freedom. But while their lives feed upon spontaneity, to them, it’s a crime not to immerse themselves. Delving into various cultures and enduring the worst living conditions are integral to travelling. Doing so requires endurance, understanding and severe risk-taking abilities.

While in Hong Kong, Joël and I found ourselves marching amongst thousands of locals as they demonstrated against China for the fourth time since the extradition bill issue escalated in June 2019. He’d decided it was his calling as a photographer to see the events with his own eyes and capture them through his very lens — which he did, going as far as to stand at the frontline during the not-so-peaceful encounter with the police on the midnight of 21 Jul 2019. He came back to our hotel room on a high — exhausted for sure, yet elated, realising he had just done something completely out of the ordinary. 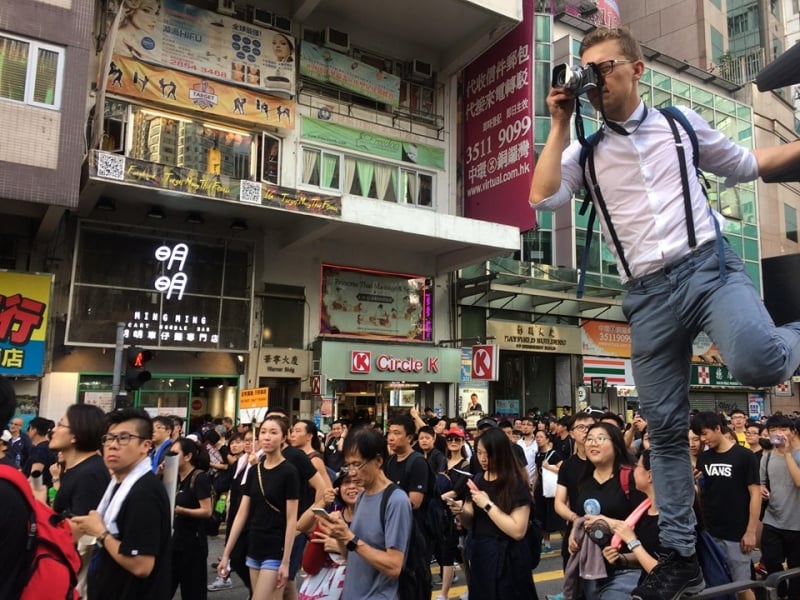 When he left for the trip, he packed no more than three shirts to last for half a year. He’d patiently wash each of them in the bathroom soon after using, rather than suffer the burden of extraneous materials in his 65-litre backpack, which had 14 kg worth of items (including his camera equipment and tripod). This was after he’d already given some of his belongings away prior to leaving Hong Kong. Truly, it’s a far cry from the many Filipino travellers I know who pack out of proportion either to travel in style, or “just to be sure”.

But, good ol’ Joël, he manages to do both. He even has his signature suspenders which he’d often match with a button-down long sleeve polo, plus a pair of shoes given to him by his father made to withstand all conditions, to name a few. Then, there was me, travelling for no more than a week yet my bag was filled to the brim with trousers, coats and extra pieces of tops that I could easily do without for this short trip.

Finally, the fact that he chose to travel with me 9,200 km from his hometown, despite us barely talking when we first met three years ago (and only occasionally reacting to each other’s posts online) was a massive leap in the dark to him, as it was to me. Then again, anyone who claims to be on a mission to connect with people from all walks of life should have the kind of intrepidity as him. This, to me, was commendable.

Travelling with a hitchhiker: Final thoughts

Travelling with a hitchhiker like Joël taught me that there’s no easy way around everything. That if I were to be one myself (maybe someday), I’d have to have the same level of persistence, optimism and dedication to learning more about the world just like he does, rather than use it as a mere backdrop of my next social media display photo.

Furthermore, I always thought that money and social status could buy everything. I thought that the only way I could survive any trip is to build upon excess, rather than having a real, orderly scheme. To rely on technology for directions, rather than simply asking the person next to me. And, to always follow a rigid timeline, rather than letting life itself piece things together. “It’s difficult, but not impossible”, as Joël would say.