If you’ve always felt hassled about being charged for taking out money at local ATMs, then you’re definitely not alone. In the case of Banco de Oro or BDO users, however, this is no longer the case, as BDO withdrawal at 7-Eleven stores has been made possible at no cost!

What does this do for the user?

It wasn’t long ago that local 7-Eleven branches launched ATMs or automated teller machines of their own. With these, bank users can withdraw cash at the said convenience store if it happens to be closer than the nearest BDO ATM outlet.

What’s more, BDO debit cardholders can use the ATMs not just for withdrawals, but also for balance inquiry. Both transactions are likewise free of charge.

Also read: How to Withdraw Money at BDO ATMs Using a QR Code

In addition, those with BDO cash cards may also use the ATMs to check their balance for free. However, withdrawing money would cost ₱2. The maximum amount is ₱50,000 per day and ₱20,000 per transaction. The minimum amount is ₱200. 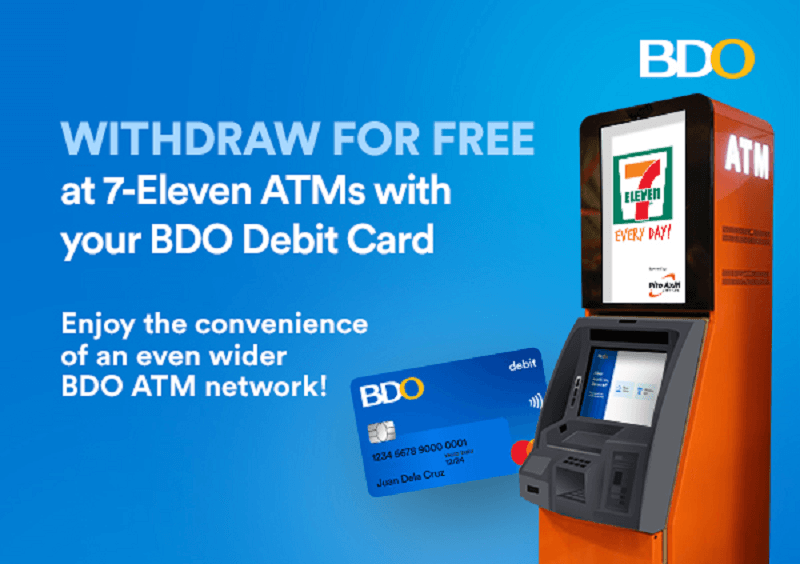 The 7-Eleven ATMs are managed by Pito AxM Platform Inc. (PAPI). It’s the local unit of Seven Bank Ltd. of Japan under Philippine Seven Corp, which operates 7-Eleven stores in the Philippines.

Where to avail free BDO withdrawal at 7-Eleven

BDO debit cardholders can only use the free BDO withdrawal at select 7-Eleven stores in the country. You may check the full list of 7-Eleven branches in the Philippines here.

The bank also points out that the same service is not yet available overseas, including Japan, where 7-Eleven stores also feature ATMs. For those abroad, you can still use your BDO card for both withdrawals and balance inquiries at international Mastercard and Visa Plus ATMs. Be sure to first secure a travel notification if you are to do so.

The 7-Eleven ATMs are also capable of cash deposits. However, at the moment, this feature is limited to store staff depositing store cash or sales made for the day for better security.