Are you itching to go out but too afraid of the summer heat and long travel hours? We’re with you. Combining these two can be overwhelming, and instead of having a great time, you end up too exhausted to even think about what a great summer trip you could have had. If you happen to be based in Metro Manila, however, there’s no need to worry about those. With plenty of day-tour friendly destinations to choose from, you too can have a fun-filled day this season!

Once operated as a municipal cemetery during the Spanish colonial period, the quaint Paco Park is now a recreational area that serves peace-seekers who aren’t a fan of the Rizal Park crowd. Inside, you will find a church, garden, historical markers and an open-air concert area. Couples also use the place for wedding rites and pre-nuptial photo shoots.

Yes, in case you still don’t know, the house of our President is also open to tours. Although a bit more complicated than visiting a public park, the tour allows you to see the stunning architecture and valuable collections inside the Malacañang Palace. Prior reservations are necessary and have to be made at least three working days before the planned tour.

Admission: FREE
Schedule: Monday to Friday at 9am-12pm and 1pm-3pm (except public holidays)

University of the Philippines’ current main campus in Quezon City is known for being the biggest in the country. With its size, jeepneys known as “Ikot” or “Toki” operate around the campus picking up students and faculty members. However, visitors can also use these as a means to tour the premises. If not, you can easily walk or even jog around the campus, taste an isaw at Mang Larry’s or chill on picnic mats at the Sunken Garden.

Part of the Angat-Ipo-La Mesa water system, La Mesa Eco Park has an endless array of activities tailored to outdoor lovers. Among them are swimming, fishing, mini trekking, camping, horseback riding, wall climbing, rappelling and zipline. There are also kubos for group picnics, an ecomuseum and a boating lagoon! Thanks to the tremendous fauna within the park, you can enjoy fresh air and shade throughout the day.

Admission: ₱20-50 (FREE for senior citizens based in Quezon City and children no more than 3 ft. in height)
Schedule: Daily at 8am-5pm

At 17 hectares, Eastwood City offers big enough space for sharing among regular employees working in the area and people chilling out. The commercial and residential development area can give the impression of an exclusive community at first, but there are actually loads of activities here that are “outsider”-friendly, including shopping at Eastwood Mall and dining at Citywalk 1 and 2. 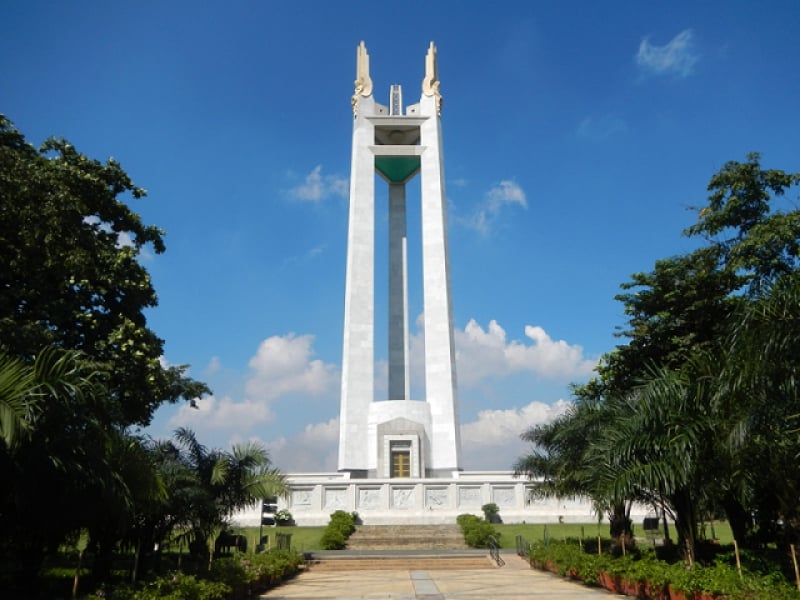 Surrounded by Quezon City’s famed Elliptical Road, Quezon City Memorial Circle is home to the 66-metre shrine where the remains of late Philippine President and his wife lies. This iconic landmark is famous for its picnic grounds usually shared by families and students from nearby schools. You can also visit the two small museums in the shrine, the Circle of Fun amusement park, the Hardin ng mga Bulaklak and more!

Situated in Cubao, Quezon City, Art In Island challenges the concept of a typical museum by having visitors play with the exhibits. On top of 3D arts, the museum prides itself with a digital exhibit made possible through the projection mapping technique. All in all, the entire facility allows you to be a kid once more while taking fun killer photos to remember the day.

Opened three years ago, Valenzuela People’s Park is bounded by government buildings, shopping centres and other places of interest. Besides being a recreational park, it also hosts occasional performances by various artists. Some of the attractions you can see here include an interactive fountain, children’s playground, giant chess board and mini zoo.

Admission: ₱100 (discounts are given to students and senior citizens)
Schedule: Daily at 9am-5pm

Found in the heart of San Juan, Greenhills features a myriad of stores that cater to different types of shoppers, from bargain hunters to luxury buyers. These stores are distributed among the five main malls within the 16-hectare shopping complex, which is the first of its kind in Metro Manila.

Admission: FREE
Schedule: Sunday to Thursday at 10am-9pm; Friday to Saturday at 10am-10pm (including holidays)

Having an adventure doesn’t always mean being out in the sun. Mystery Manila gives you a chance to live out your dream of being a detective through a 60-minute activity in which you’ll have to solve clues within themed rooms. If you solve the given mystery fast, you can even take home a prize! You may choose among their Pasig, Makati and Quezon City branches.

Admission: ₱400-550 (depending on the number of participants)
Schedule: Depends on the branch

Who knew this huge recreational park existed in Pasig City? Believe it or not (if you’re not from the locale), Pasig City Rainforest Adventure Experience (RAVE Rainforest Park) and Pasig Central Park has been around for over 40 years now. It features a swimming pool, children’s playground, adventure park, butterfly pavilion, picnic grove and mini zoo, among many others.

As adults, you probably miss fooling around for hours in the most random environments. That’s one reason why you’ll love Ball Pit Manila, dubbed as the “biggest ball pit for adults-only” in the Philippines. Jump into and lay among thousands of balls for a nostalgic and strangely therapeutic experience.

Going for a good splash doesn’t have to happen at the beach, especially when you have a large water-based facility right in Metro Manila. Ace Water Spa can be your aqua playground wherein you can enjoy amenities like herbal pools, steam room, sauna and an Olympic-sized swimming pool. There are also a few dining options where you can have a good bite after a day in the water.

Admission: ₱550 (Adults) and ₱250 (Children no more than 4 ft. in height)
Schedule: Sunday to Thursday at 6am-10pm; Friday to Saturday at 6am-11pm (including holidays)

Realistically speaking, a day isn’t enough to go around one of the largest malls in Southeast Asia. There are attractions both inside and outside the mall premises, and timing is everything in order to enjoy them. Aside from shopping, you can go ice skating, eat seafood, bowl and chill out at SM by the Bay.

Some people may find it ridiculous to enjoy long hours in a crowded place, but Star City makes up for it by being the only all-weather and air-conditioned amusement park in the country. There are over 30 rides and attractions that can suit people of any age. Some of the most notable ones are the Zyklon Loop roller coaster, Jungle Splash water log ride and the Giant Star Ferris Wheel, whose 32 gondolas are air-conditioned themselves!

Learning never stops even on your day off at Taguig’s Mind Museum. The six-year-old facility within Bonifacio Global City has been well known for the design and execution of its exhibits, which garnered it a recognition at an international awarding event in 2014. There are over 200 interactive exhibits featured inside that will awaken the scientist and explorer in you.

Made to serve as the premier shopping destination of McKinley Hill Town Center, The Venice Piazza mirrors one of the most notable world landmarks in Italy through its Italian-inspired architecture. Take Instagram-worthy shots with St. Mark clock tower and the Grand Canal (where you can also ride a gondola), and wrap up the day with a romantic dining experience at one of the Italian or Mediterranean restaurants.

Still think you have nowhere to go in the National Capital Region? Going out of the city can be a great adventure, but nothing beats the convenience of being in the comfort of your own neighbourhood when all you want is to have a good time, and nothing less.

Previous ArticleSafety Tips For Female Travellers: 15 Things You NEED To Know!
Next Article7 Tips to Improve Your Instagram Travel Grid