Ever since I set foot in Banaue, I want to witness something cultural. Something traditional that is truly Ifugao. I want to be in the presence when someone does a ritual. The hair-raising kind that will give me nightmares. Just kidding. My Banaue trip last year was a memorable one and it merits enough reason to visit the place again. When I found out that Imbayah Festival is now an annual thing (instead of the usual celebration of once after every 3 years), I got excited. The last Imbayah Festival was held last 2015. Because we were unable to travel on the 25th of April, we got our tickets booked from April 26 to May 1, 2016.

Imbayah is a celebration of Ifugao culture, rice harvest and planting. It was derived from the Ifugao word bayah which means rice wine, signifying nobility and high stature in the community. The festival is based on an old ritual celebrating the ascendancy of a commoner and his family to the ranks of kadangyans or the Banaue elite. Festival activities include lots of Ifugao games involving g-string-clad men and body strength.

I’ve been pestering Banaue’s tourism officer Dale about the Imbayah dates from the day I read the PR online. After months of annoying texts sent, he finally gave me an answer early January when I sent him another enquiry as my last attempt. 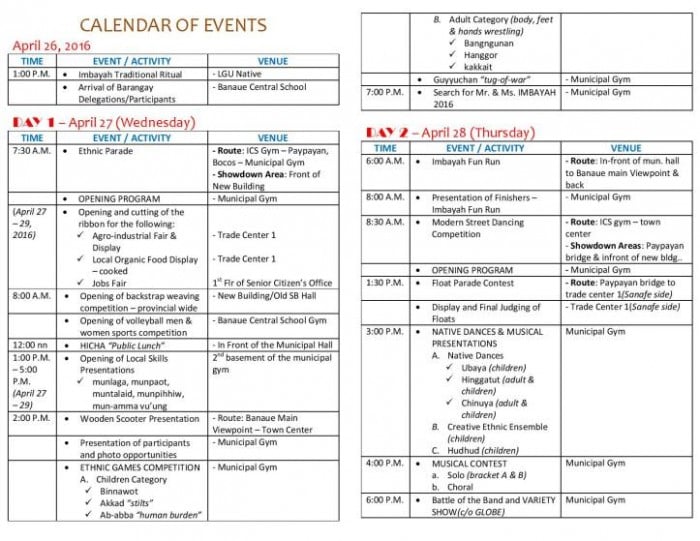 I am more prepared on the road trip this time. We still took the Baguio-Banaue route day trip rather than the overnight bus. I took 1 Bonamine before leaving Baguio, then another when we stopped over in Ambuklao, Benguet. I hate this part of the trip because of the zigzag curves, which I assume is Kennon Road. But another hunch told me that we passed Halsema Highway (no, don’t Google this!).

Never mind, I know you’ll Google it anyway. But don’t let that stop you from taking the Baguio-Banaue route.

Dale emailed me the events and activities happening for the Imbayah Festival. Most of which I barely understand because they are in Ifugao dialect. Since Kareen’s sole purpose for this trip is our Batad adventure, I get to handpick which activities we’re going to see.

In my list, we have the wooden scooter race and the native dances. Fellow travel blogger Sai (of Lakas Ng Trip) suggested that we should witness the opening ceremony where the locals would bring a live bovine or some pig in the middle of the square and the (participating) natives would hack it to death. Brutal but very pagan. It is unadulterated culture and tradition, mind you. You don’t get to see things like that in the city. It reminds me how Heneral Luna died in the movie of his namesake or just another Game of Thrones death scene. Since we missed it in the morning, we didn’t know if the same ritual was made. 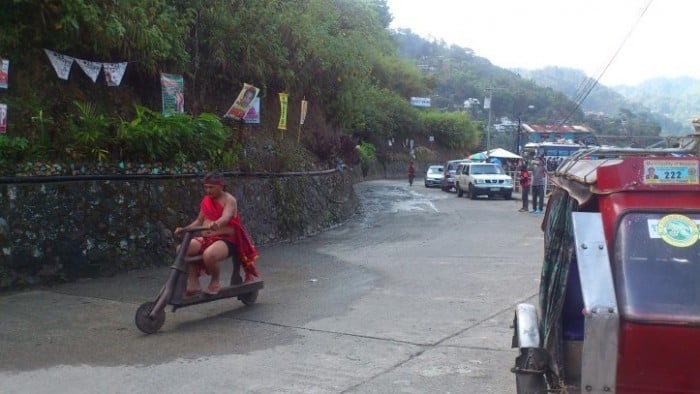 The wooden scooter race is scheduled at 2 pm and we thought we can no longer make it, but Kareen was looking forward to it, aside from the native dances. And we’re delighted that we were just in time. Since there’s a road block en route to the Banaue Tourism Centre, we decided to get off and walk towards it. We dragged our huge bags, ignored the dizziness from the long ride, and took our respective positions in anticipation of the scooter racing.

The race was not like what we expected, so far from the one in the Bear Brand TVC, because the scooter drivers passed us by one by one. It was a bit disappointing but we’re still happy since we witnessed it.

Our chosen lodge was fully booked (no surprise there!), we trusted our gut feel and looked for a trustworthy-looking tricycle driver to help us find a good lodge to stay (we always do this and we are 80% correct most of the time). We checked in at Las Vegas Lodge and Restaurant (the one across the Cordillera Museum), freshened up and headed back to town.

As we strolled in the trade centre, we found out that they’re going to repeat the scooter racing in a few minutes from the bridge down to the town proper. Guess our luck is on our side. And we got the best seats in the house as we watched the scooter racers zoomed past us in their two-wheeled wooden scooters. The Ifugao rice god, Bulol (bul-ol), anitos and the other rice guardians, aligned the stars and (literally) the wooden scooters just for our eyes. Yep, that’s tadhana (destiny) right there in the works. The float parade is not part of my Imbayah list of activities to see but since it happens before the native dances, we decided to check them out and see how Ifugaos do a float parade. 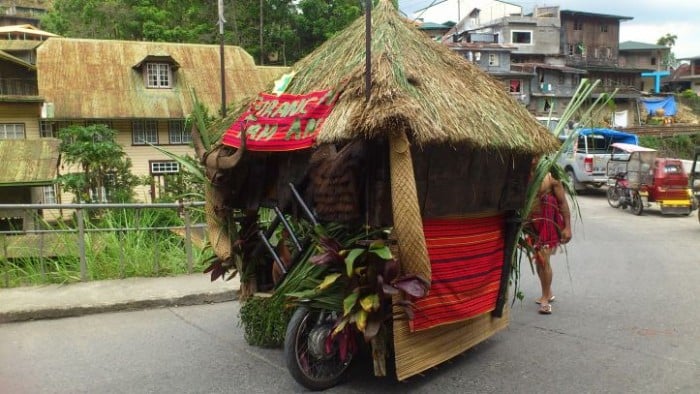 There are only 6 float tricycles and float #2 is Kareen’s favourite. Don’t ask me why. 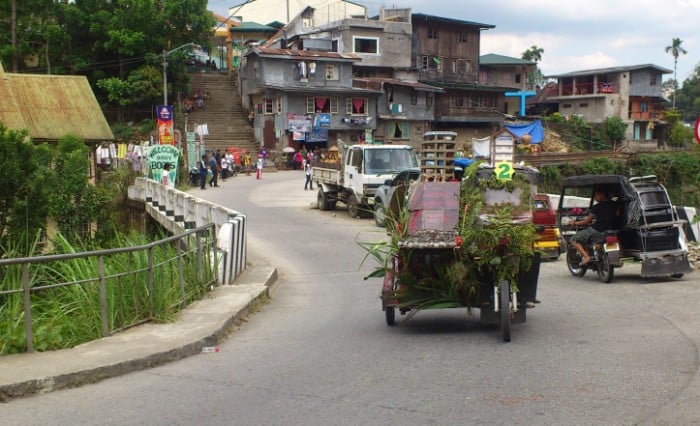 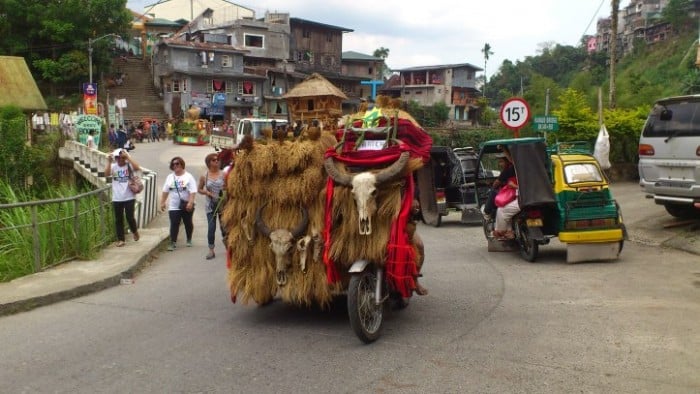 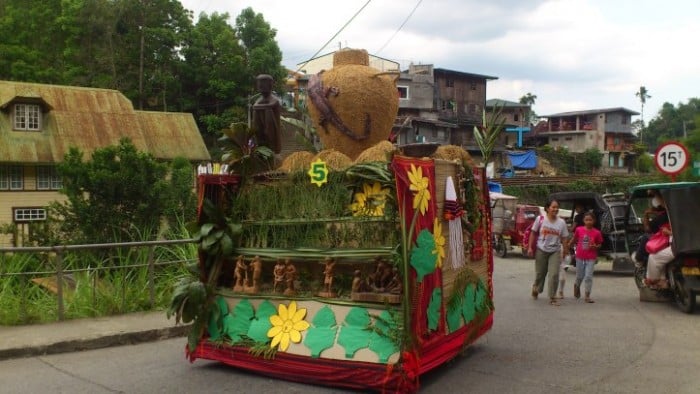 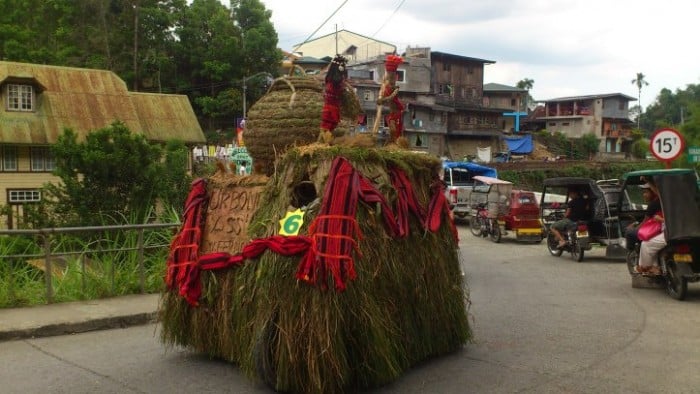 I’m used to seeing a float in six to ten-wheeler trucks every Sinulog but Ifugaos got creative and converted their tricycles into floats. 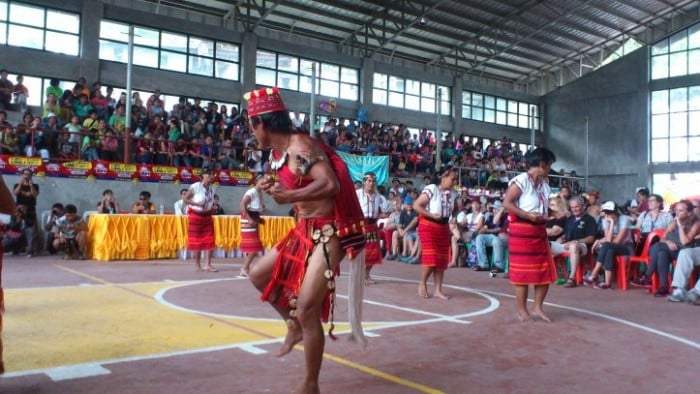 We were just in time for the dances. After the floats parked outside the municipal gym, we saw a group of Ifugao boys in their g-string costumes who seemed to be crouching en route to the gym. I tugged Kareen and we followed them. Luckily, we did because they are the opening group for the native dances. Their leader, a grown up guy was chanting “Eem-bah-yah!” which was responded by the little boys “eem-bah-yah!” while they brandish their spears and continue their crouch dance-chant number. 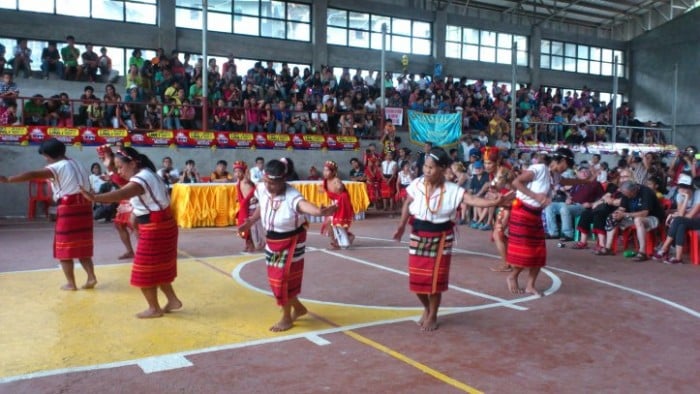 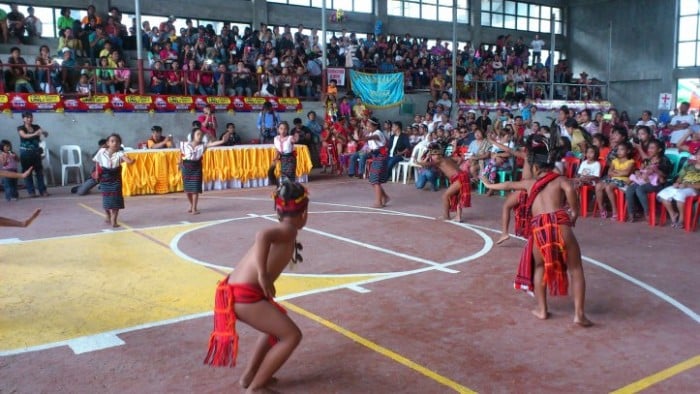 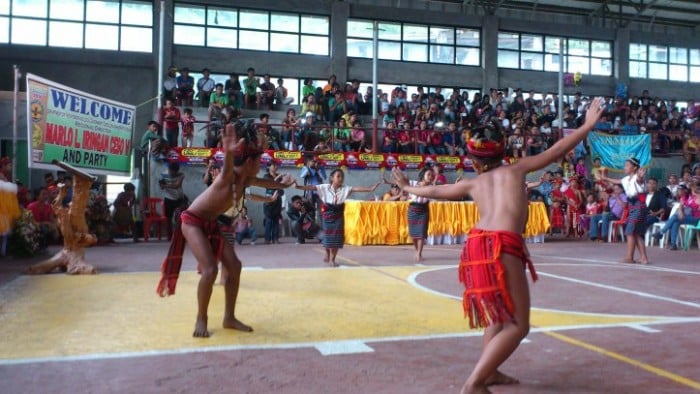 Here are clips of their performances:

The photos below were taken by Kareen. These kids are national champions for native dances. And they were awesome! 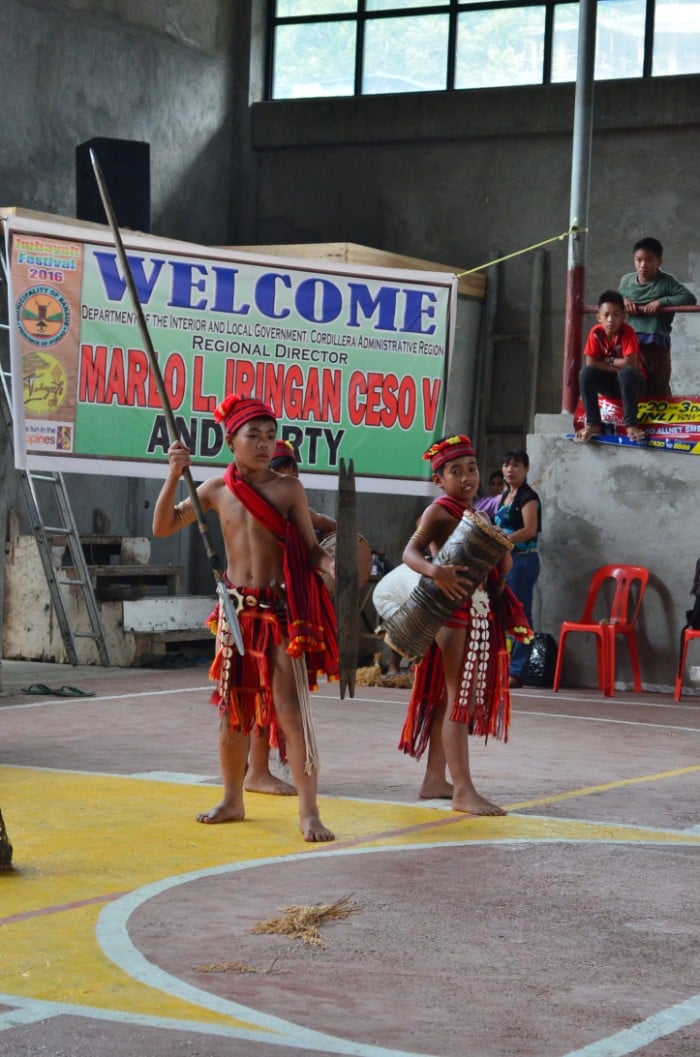 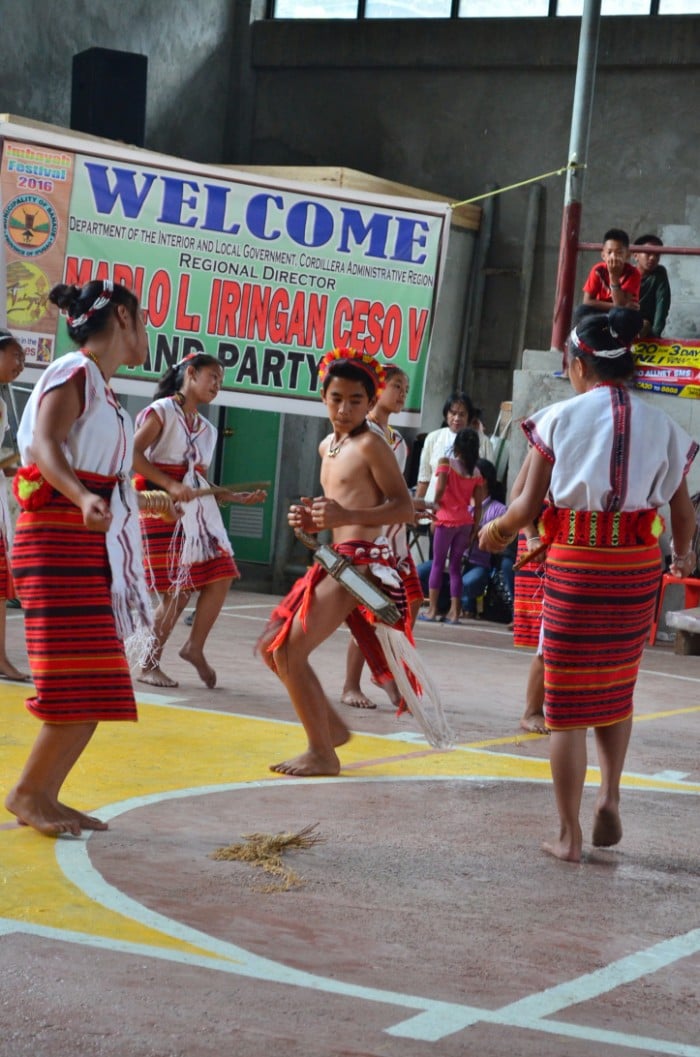 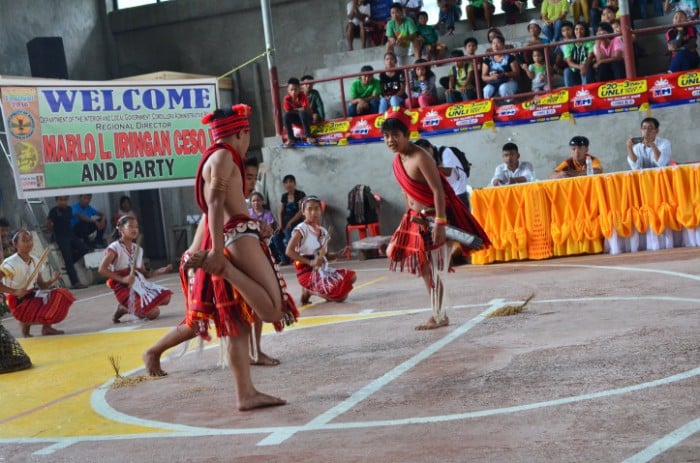 Two kids demonstrated one of the many Ifugao games

Though we didn’t get to see any Ifugao games because we went to Batad, we are contented to be part of the Imbayah celebration. I hope this won’t be my first and last Imbayah Festival experience.

Previous ArticleHow Our Barkada Visited Apo Island and Siquijor for Just ₱2,560 Each
Next Article12 Unique Restaurants in Quezon Province Worth Hitting Up