Don’t you just hate it when some people say that Filipino food “isn’t that interesting” because supposedly it’s just vinegar, fish sauce, and sugar? Clearly, this couldn’t be less true, as proven by a now-popular Facebook post from John Sherwin Felix, a Pasay-based heritage and culinary enthusiast. There, he featured a wide variety of locally grown ingredients from different parts of the Philippines.

On his passion for Filipino food heritage

“The more I learn about our food heritage, the closer I feel to our roots. After all, our food also shapes our identity,” he said when asked about what inspired him to start this passion project. John Sherwin also shared that he has always had a keen interest in culture and heritage since his college days. But this intensified during the pandemic, especially when he saw the further need for sustainability and healthier food options.

Another reason? Our local food producers have been severely affected by the pandemic. “I’m hoping that this project would lead to more people appreciating and purchasing these local farmers’ products, which will then help their livelihood,” he added. “More often than not, many people simply aren’t aware of these locally grown ingredients, hence they don’t notice these when they’re at the market or grocery.” 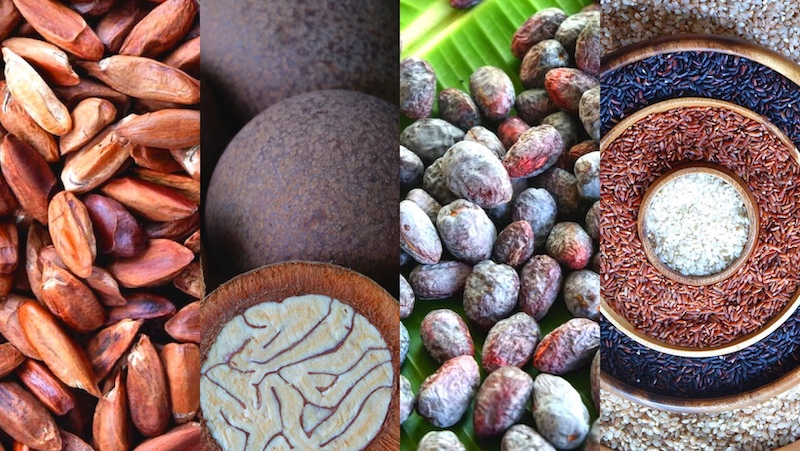 Yes, there’s clearly a lot more to Filipino food heritage. And so, we’ve listed down the most interesting ones that you should keep an eye out for! (Aside from the usual siling labuyo, sampalok, traditional vinegar, and such.) Some of these you probably already know about, while others are the best-kept culinary secrets of their respective regions or provinces. 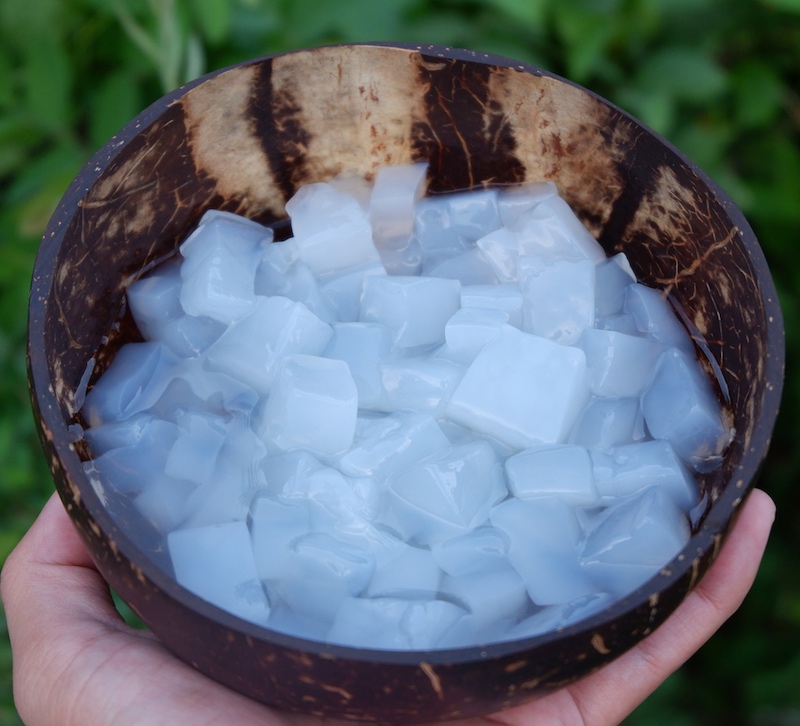 This is undoubtedly one of the most famous Filipino ingredients, given that it’s a staple for crowd favourites such as halo-halo, buko pandan, and even other Asian desserts! But did you know that it really was invented in the Philippines? Specifically, by a Filipina chemist named Teodula K. Kalaw back in 1949! How cool is that? 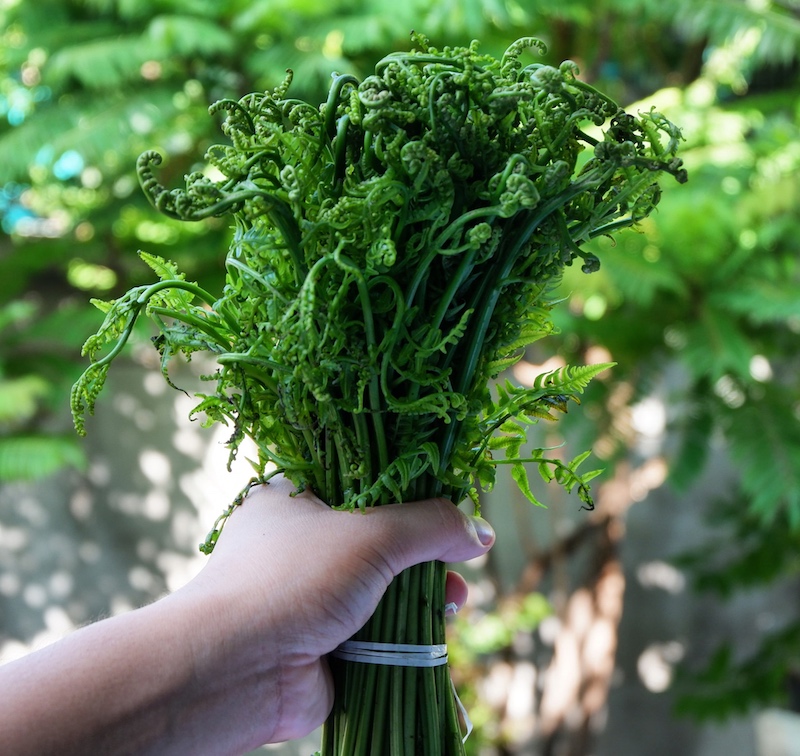 Otherwise called a fiddlehead fern, this indigenous plant certainly makes for a delicious salad base. But hey, who’s to say you can’t have it on its own? It’s packed with lots of nutrients like calcium, iron, and fibre. There are also different ways of pronouncing it, but generally, it’s “pa-kó” if you want to play it safe. 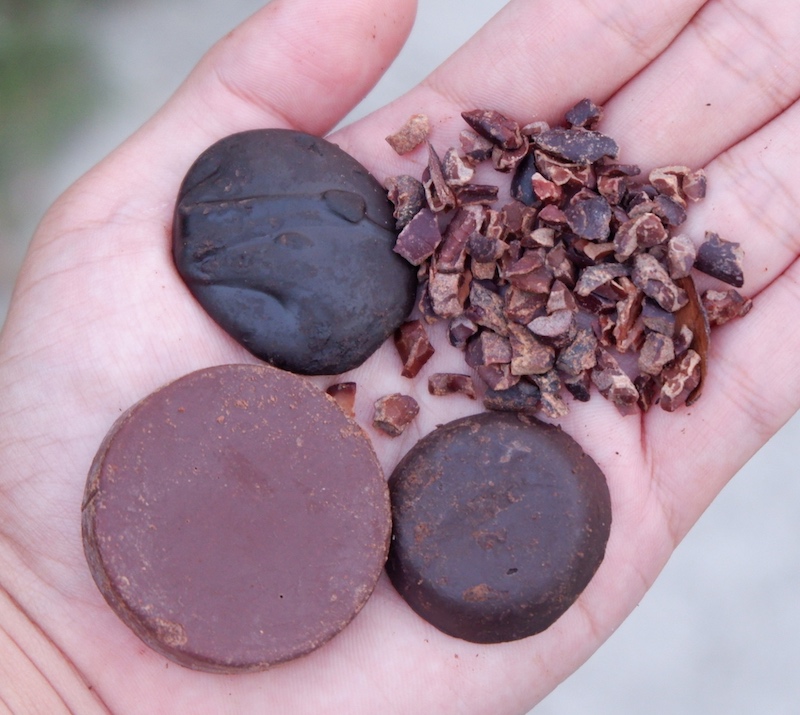 Cold weather treats like hot chocolate and champorado just hit different when they’re made with these locally grown ingredients. Sorry, we don’t make the rules. Kidding aside, you can find an abundance of these in Davao, Negros, Cebu, and Batangas.

Also read: Cafes in Baguio: Where to Get the Best Coffee and Hot Chocolate in the City of Pines! 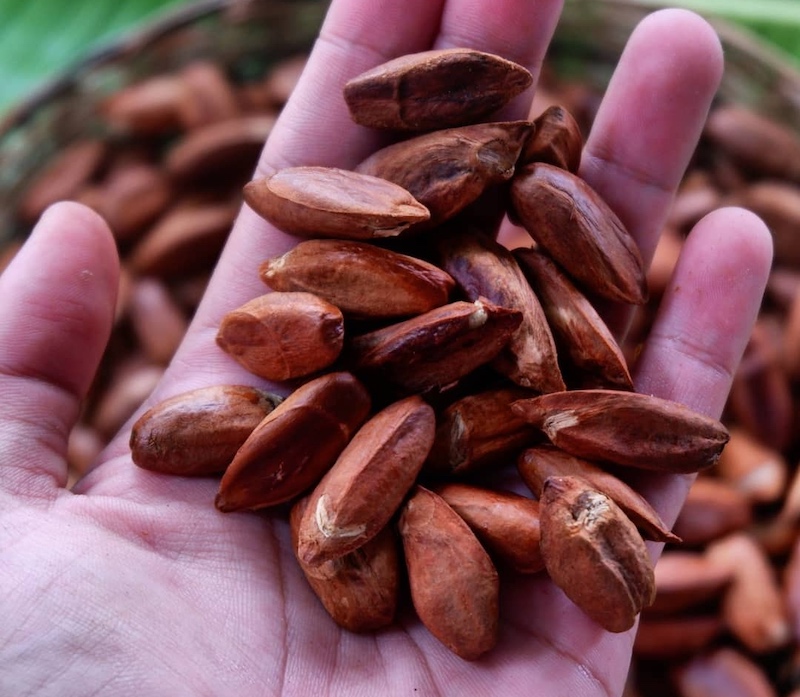 Fun fact: The Philippines is the only country that grows this for commercial and culinary use! It’s grown mostly in Bicol Region and Eastern Visayas. However, recent reports from the International Union for Conservation of Nature have classified this as endangered. 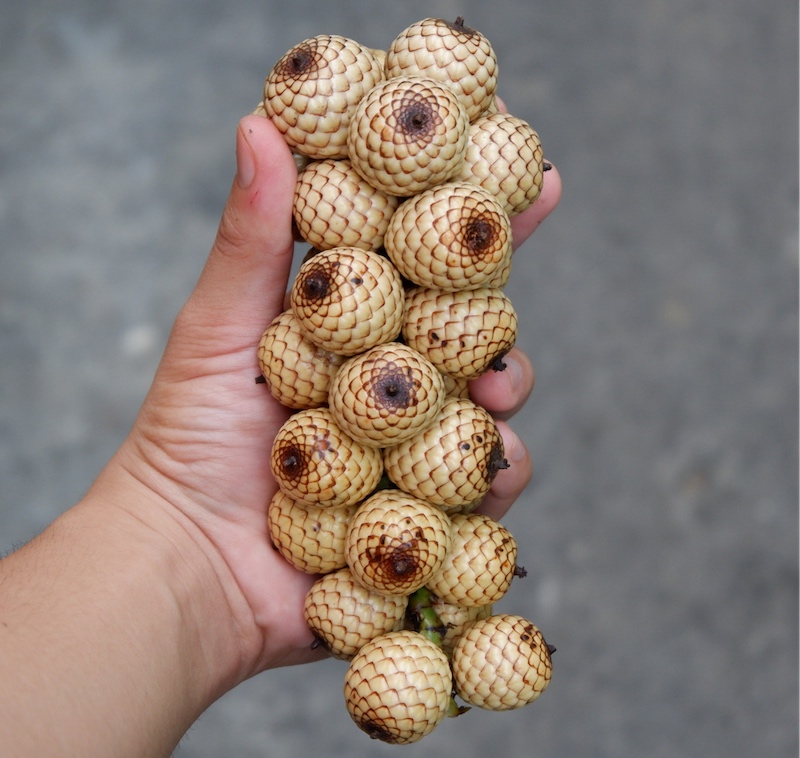 I remember when I first saw these at the market when I was a kid, and thinking that they look like lanzones but with reptilian scales. Otherwise known as rattan fruit and littuko, these often have an extremely sour taste that can rival the likes of tamarind and kamias. “It’s an excellent souring agent for sinigang!” said John Sherwin. 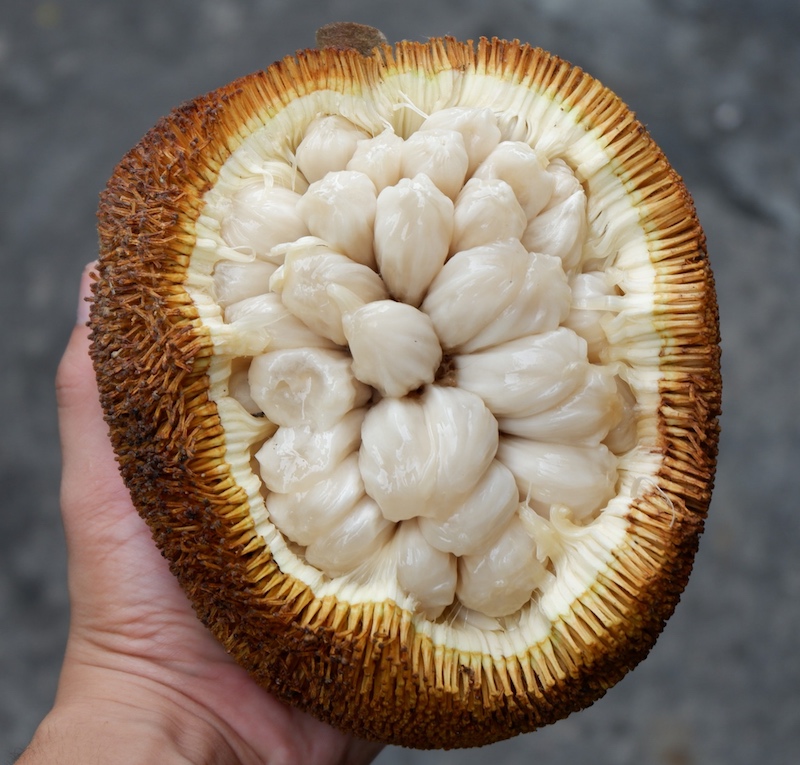 This is among the locally grown ingredients that you can also find in other countries — specifically Borneo. It comes with an edible pulp that’s both sweet and fragrant. Just make sure to consume it soon after buying, since it has a relatively short shelf life. 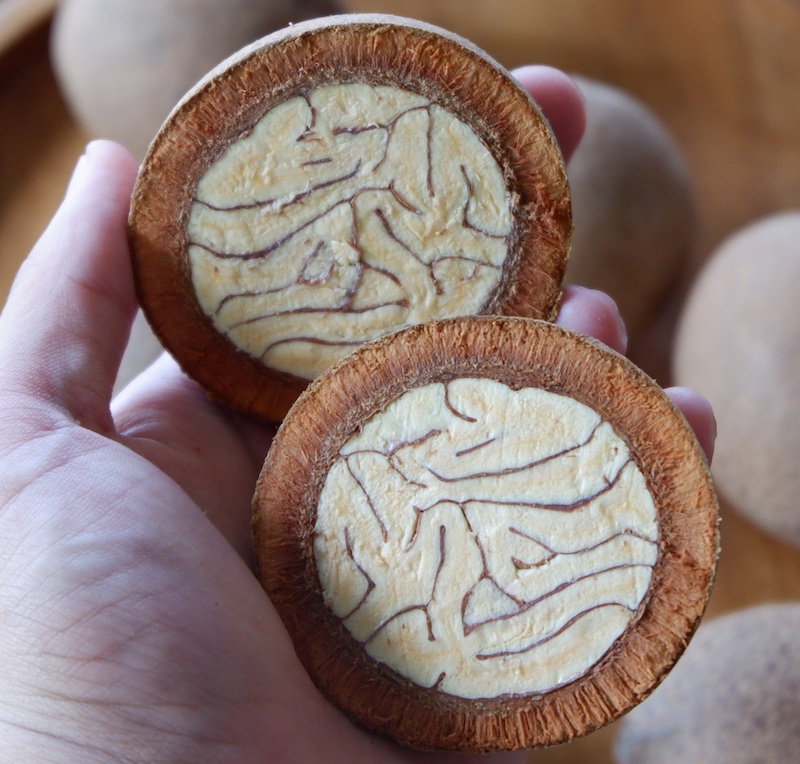 I first learned about tabon-tabon when my friend (who’s from Cagayan de Oro) and I were talking about kinilaw, and she mentioned this is one of the best Filipino ingredients ever. I gave her a very confused look, which led us to realise that this is something exclusively found in Northern Mindanao! Essentially, it helps neutralise the fishy smell of kinilaw dishes. 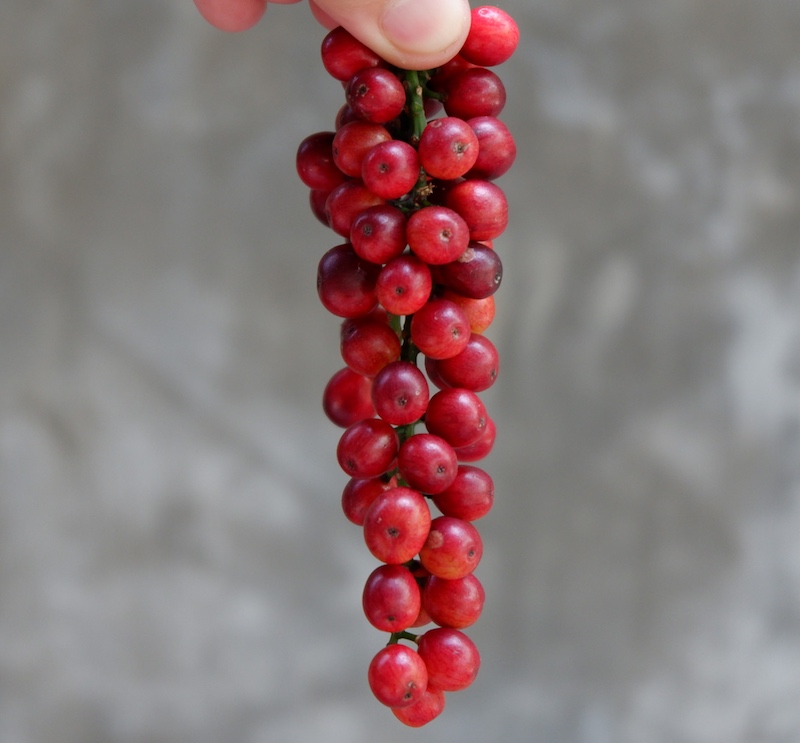 Alternatively referred to as bugnay, these dark purple berries are commonly used for making wine and jam! The unripe versions can also be used as a souring agent. 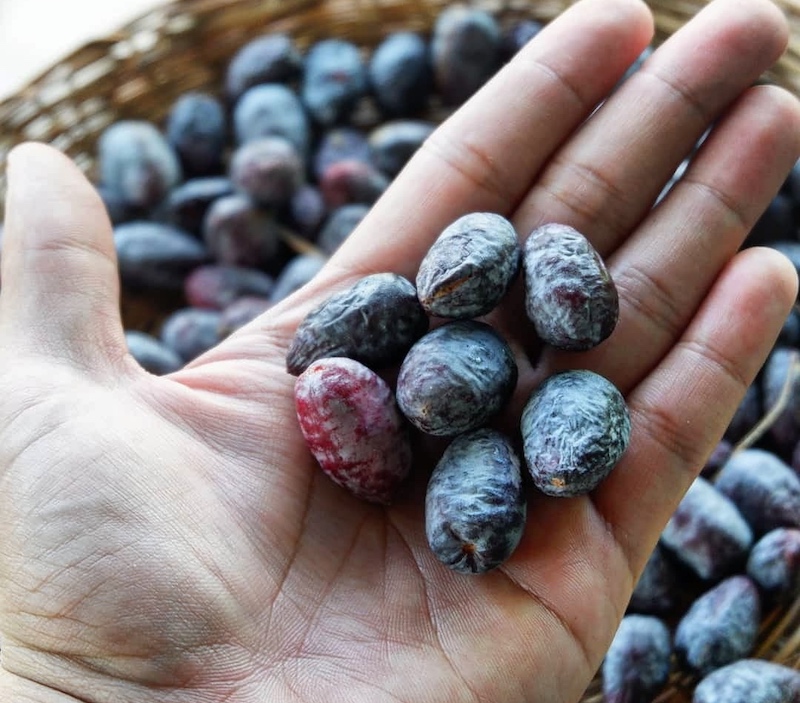 This is another among the berry-like native fruits, which you can turn into jam or juice. Some even go as far as to use this as lambanog sweetener! Also, it’s sometimes referred to as the Batangas cherry. 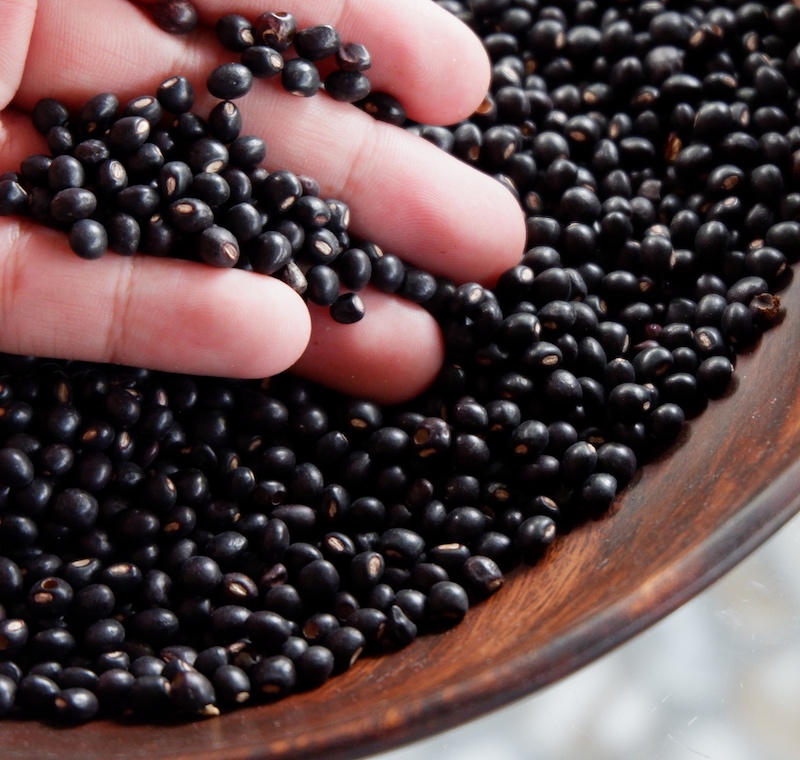 Those who are from or have been to Iloilo would like to know what this is. It’s one of the key Filipino ingredients for the Ilonggo dish, KBL — which stands for Kadyos, Baboy, Langka. And in case you were wondering, the English term for this is pigeon pea. 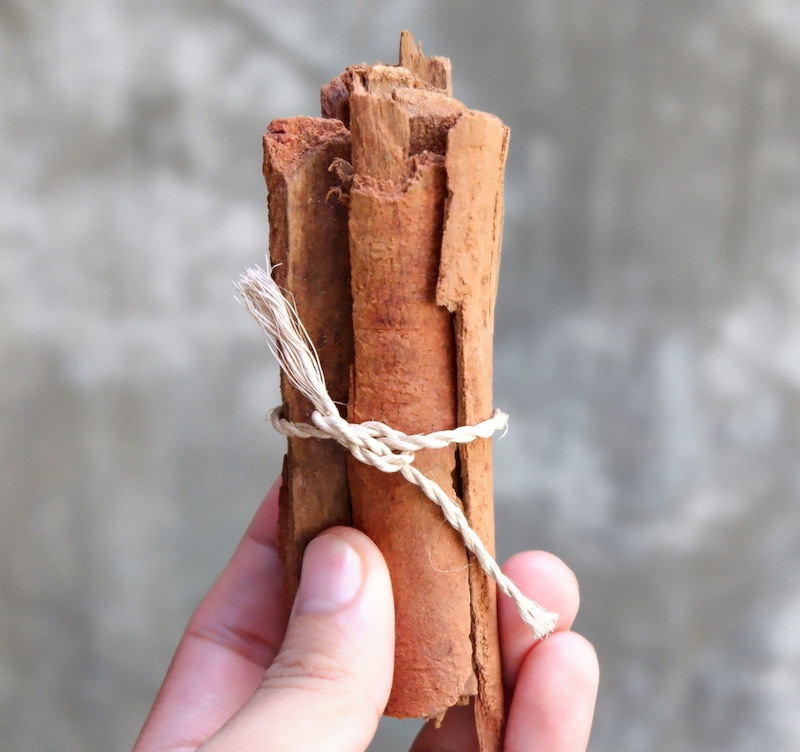 Pronounced as “ka-li-ngag,” this right here is a type of cinnamon bark that’s native to the Philippines. It’s traditionally used for medicinal purposes, though it also makes for a good tea or even flavouring for pudding and savoury dishes! 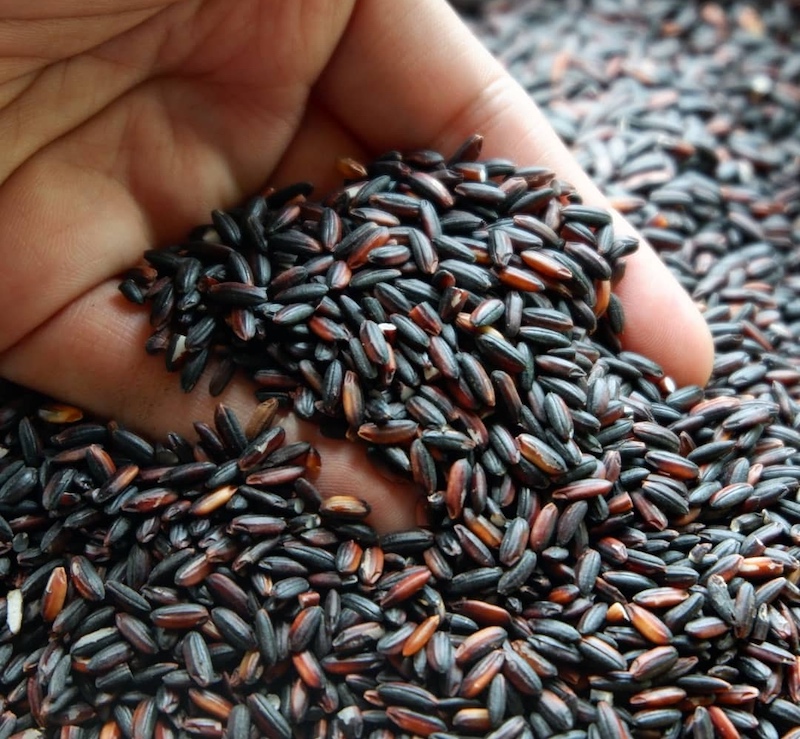 “I love using this for champorado and rice cakes,” shared John Sherwin. This glutinous heirloom rice is native to the Cordillera Region, and comes with a chocolatey flavour and aroma that is every bit mouthwatering. 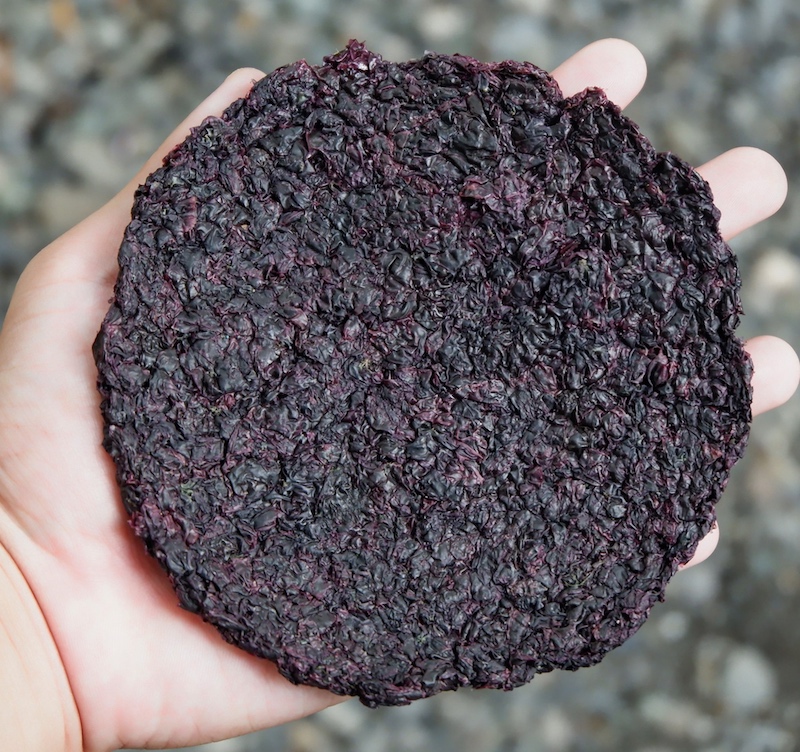 Not to be confused with the other Filipino word, this one is a seaweed harvested in the rocky shores of Cagayan and Ilocos Norte. Many would say that it’s the local counterpart of Japanese nori that also gives an umami flavour. 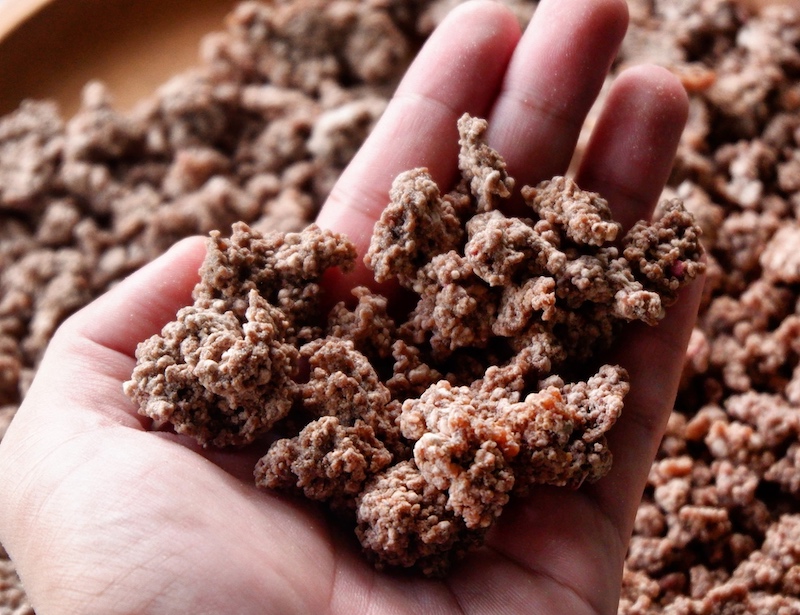 This comes from the buri tree, a type of palm that’s native to the Philippines. It’s basically our local version of tapioca, although it does have a different consistency from the usual sago. It’s often added in binignit, a dessert soup that hails from Visayas. 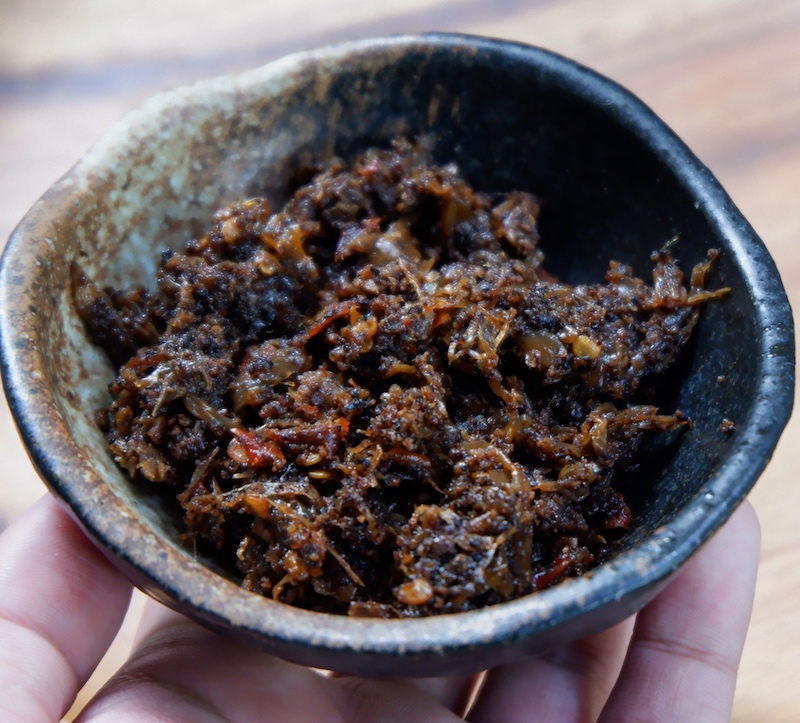 Here, we have a Maranao condiment made from chopped white scallions, pounded ginger, turmeric, siling labuyo, and niyog. It’s got a perfect blend of sweet and spicy, and can be eaten either raw or cooked. And in case you were wondering, it’s pronounced as “pa-lá-pa”! 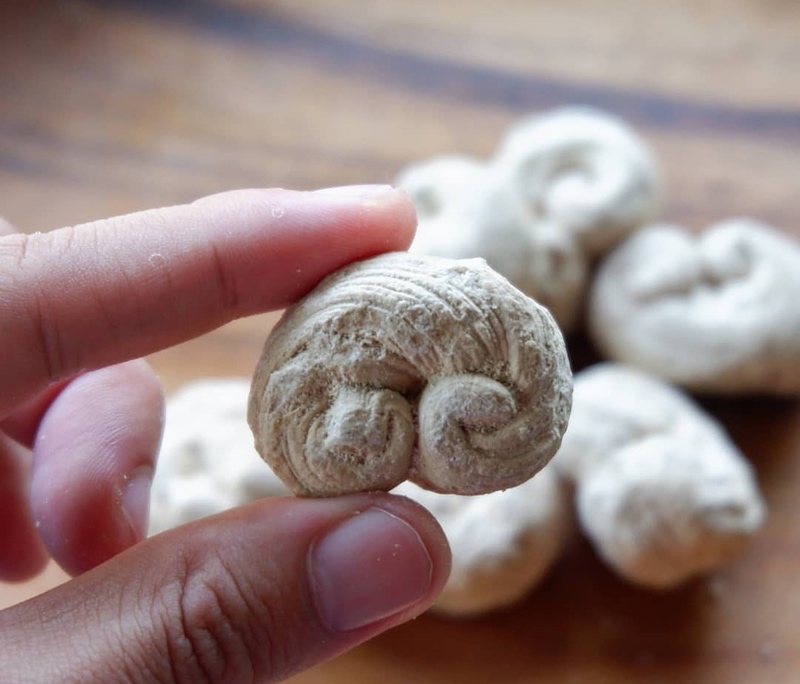 Shoutout to Filipino food heritage for giving us a healthier alternative to refined sugar! These pastry-shaped muscovado candies are made from raw sugarcane syrup and are typically found in the Ilocos region. You can either enjoy ‘em as is or as a sweetener for your fave beverage! 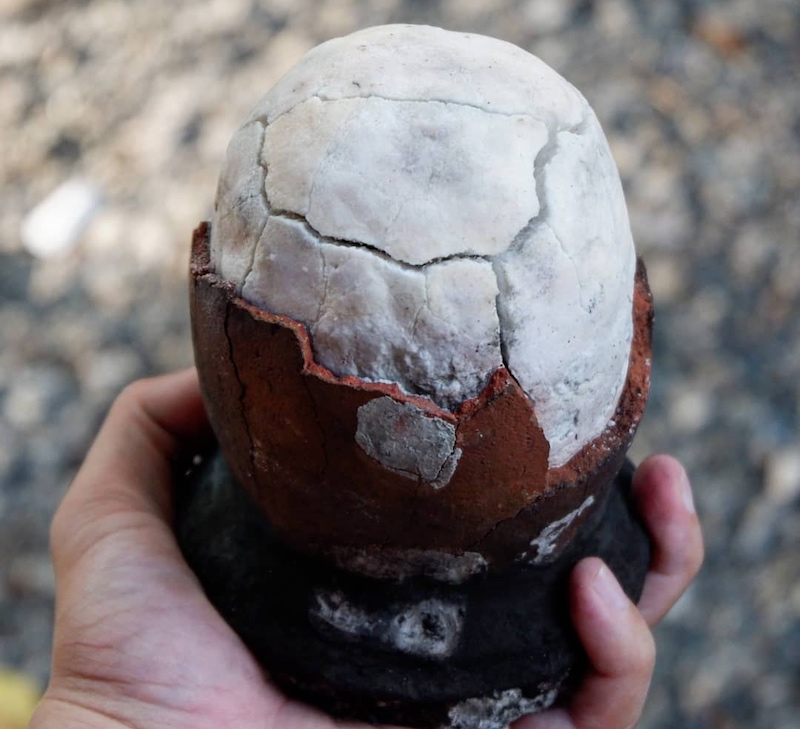 Doesn’t this native Filipino ingredient look like a dinosaur egg? Well, it’s actually an artisanal sea salt from Alburquerque, Bohol! It’s also a personal favourite of John Sherwin’s, with its sharp smokey taste, fascinating appearance, and labour-intensive process. “It really caught my attention because of how long it takes to complete, starting from soaking a coconut husk in saltwater for months,” he said. 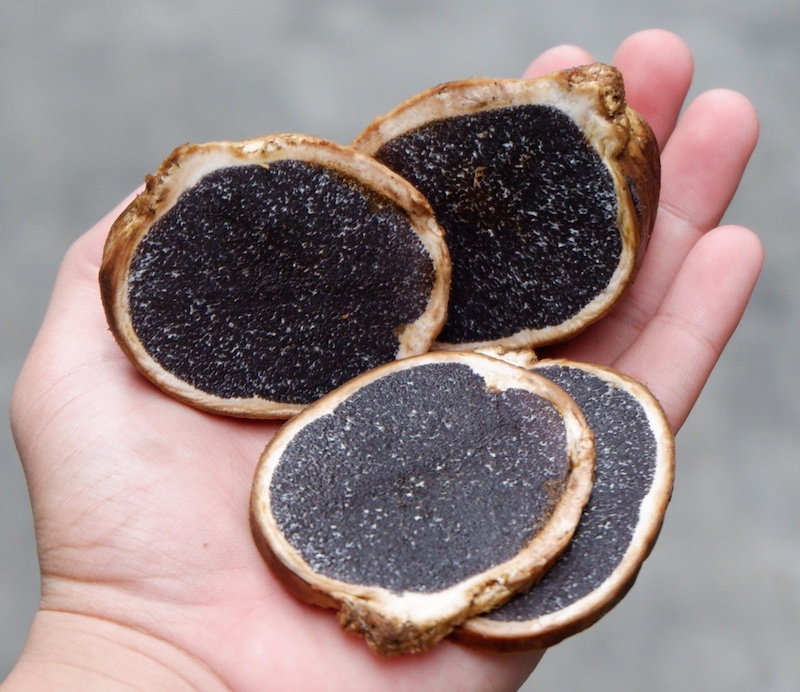 Sometimes spelt as bu-ow, this edible fungus from Cordillera has an interior resembling that of a truffle! However, this native Filipino ingredient grows above the ground and has no wide cultivation. Taste-wise, it’s earthy with a hint of bitterness that goes best with soup, stew, or even pasta.

Also read: Philippine Souvenirs: 21 Trendy Gifts and Tokens to Take Home With You

As of writing, his post has garnered over 18,000 likes and 22,000 shares. You can also check out his Instagram page for more Filipino foodie inspo!