To witness cherry blossoms, Filipinos would usually have to travel all the way to places like Japan and South Korea, which would cost at least ₱5,000 for airfare alone. Even then, the experience would have to be both taxing and absurdly expensive as soon as they decide that one sighting of them isn’t enough.

When cherry blossoms in the Philippines became a thing after Filipinos began planting them in their backyards, it seemed there was hope for some of us to see these amazing natural attractions without spending as much money. Like these plantitas and plantitos, one particular Mindanao farmer made waves after successfully growing similar imported trees at his local home. Thus, making them accessible locally as well!

Also read: Taking Up Gardening? Let These 20-Somethings Show You How

Fuji apples, raspberries, and more from this Mindanao farmer

Benzone Kennedy Sepe is a farmer based in Digos City, Davao del Sur. Thriving in his backyard are fruit counterparts of the world-famous cherry blossoms, which are essentially trees that are only usually grown in temperate climates, including East Asia and North America. But thanks to the 29-year-old farmer, they have found home in the Philippines, too. 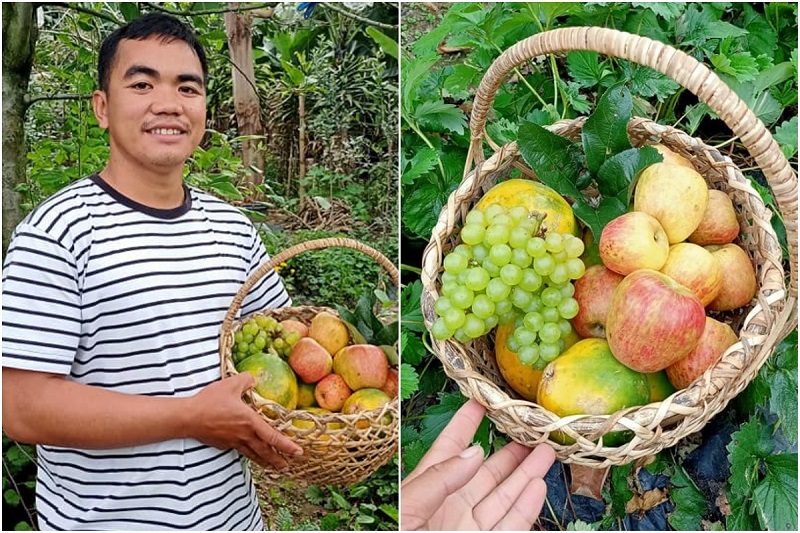 Among Sepe’s trees are raspberries, strawberries, grapes, dragon fruits, pomegranate, and pears. However, based on his YouTube channel and Facebook page — both of which he manages — it would look like he mostly dedicates much of his time to growing apples. His apple orchard is located at the foot of Mount Apo, and is home to more than 300 apple trees.

According to a MindaNews report, Sepe got inspiration from farmers in South Korea during a two-month trip to the country back in 2015. Following that trip, he started growing Fuji apples in Digos “after he learned how successful farmers [are] there with propagating tropical mangoes despite the cold climate with the right technique and technology,” the report said.

The young Mindanao farmer attributed the success of growing the apples in particular to “longer sunlight exposure,” as apple trees usually flourish during sunny days. Harvest likewise takes place every six months due to the Philippines’ favourable climate conditions. When he’s ready to produce them commercially abroad, Sepe said he’d like to call the fruits “Benzone apples.”