Why Everyone Is Raving About BTS’ ‘Permission to Dance’ Music Video

We’ve barely moved on from BTS’ hit single Butter (which, at the time of writing, has topped the Billboard Hot 100 for a whopping seven weeks!); but not even two months after its release, the South Korean boyband gifted their fans with yet another feel-good summer bop. Released on 9 Jul 2021, the Permission to Dance music video received so much love — both from fans and non-fans alike.

If you find yourselves completely outside the narrative but seem unable to escape those raving about BTS’ latest release, then perhaps it’s time to find out what all the fuss is about. Don’t worry: Simply joining the discussion doesn’t mean you have to dive headfirst into the ARMY — unless you end up interested, of course! 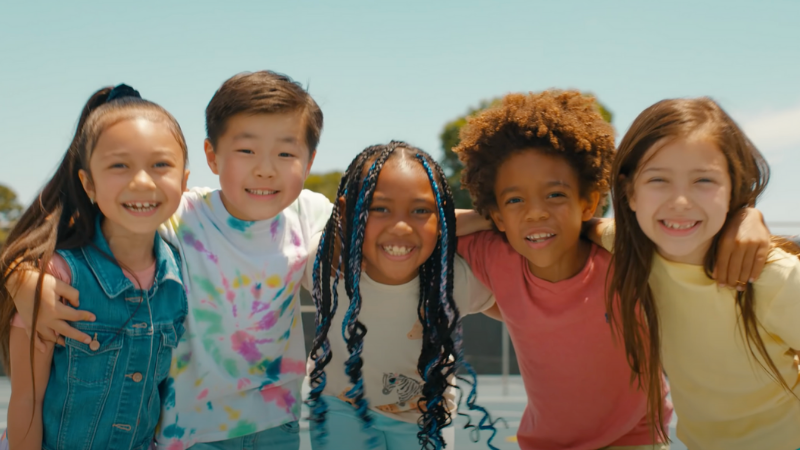 It’s been a long while since anyone besides the members of the boy group were featured in one of their music videos. Permission to Dance, however, stars a whole bunch of characters — and they’re of various ages, genders, and races, too.

Not only that, BTS has also been praised for using sign language in their new music video, proving that their music is truly for everyone. In relation, fans revealed that BTS has actually had sign language interpreters at some of their past concerts. As if all that wasn’t enough, the music video’s release in July made it extra special, as July is actually Disability Pride Month.

In the world of K-pop idols, most singles come with their very own choreography. BTS is known for going all out in the dance department — and with a title like Permission to Dance, it was suspected to be a choreography-heavy song.

The pleasant surprise? With a little practice, the point choreography is totally doable by us mere mortals; and even better, international sign language has been incorporated into it, too! Fans, friends and family of fans, and non-fans from the hearing impaired community were touched upon discovering this. In the music video, you’ll see the group signing for the words “fun,” “dance, and “peace.”

Seeing sign language gestures in such a big music video even brought a number of people to tears. If you stop and think about it, the hearing impaired community was actually affected by the pandemic in a way that not everyone can fully grasp: They lost the ability to lip-read. While the inclusion of sign language may not be much to some, it was more than enough to make a whole lot of people feel seen and included.

Fans think of this song as a more cheerful, upbeat counterpart to BTS’ Life Goes On — a pandemic-inspired song from their self-produced album, Be. The Permission to Dance music video, which highlighted frontline workers, children, and senior citizens (some of those deeply affected by the pandemic), seemed very much like a message of hope and a reminder that there is indeed life after the pandemic. 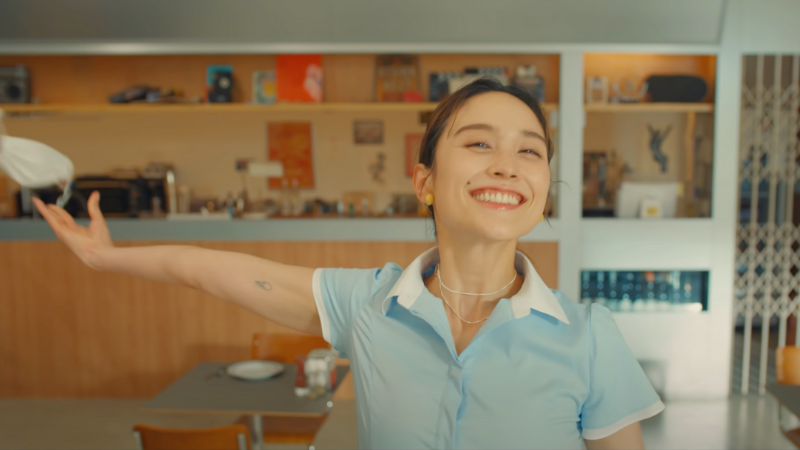 All this being said, despite PTD’s cheerful vibe, the music video was still enough to move many to tears. I know it wasn’t just me who cried the moment everyone started removing their masks — it was a much-needed reminder that the day will surely and eventually come.

4. The amazing set was built from scratch 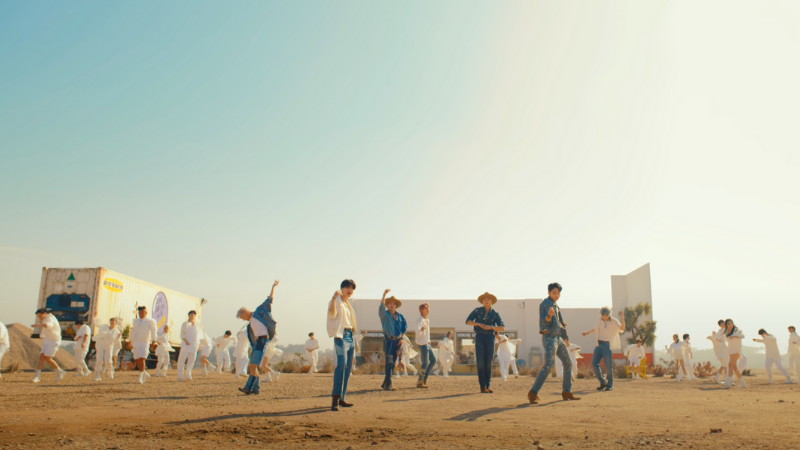 You might be wondering: Where did they film this? Did they go all the way to Joshua Tree or Arizona or something? Amazingly, the answer is none of the above. Permission to Dance was filmed in Incheon, South Korea. The set, from the desert to the laundromat, was built entirely from scratch by a production company called Mu:E artwork — the very same one behind the Dynamite music video! 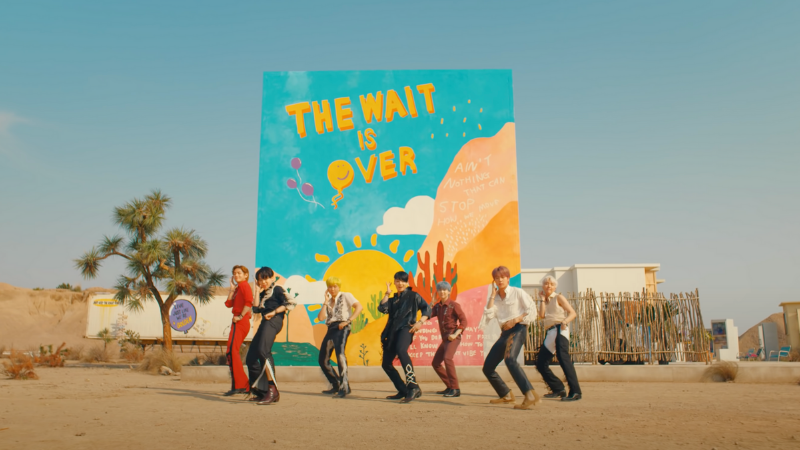 Plus, the vibrant, now-viral mural in the background of the music video was painted by Mexican artist Abel Macias. If you look closely, you’ll find that lines from the song are written all over it!

5. They received a nod from Sir Elton John 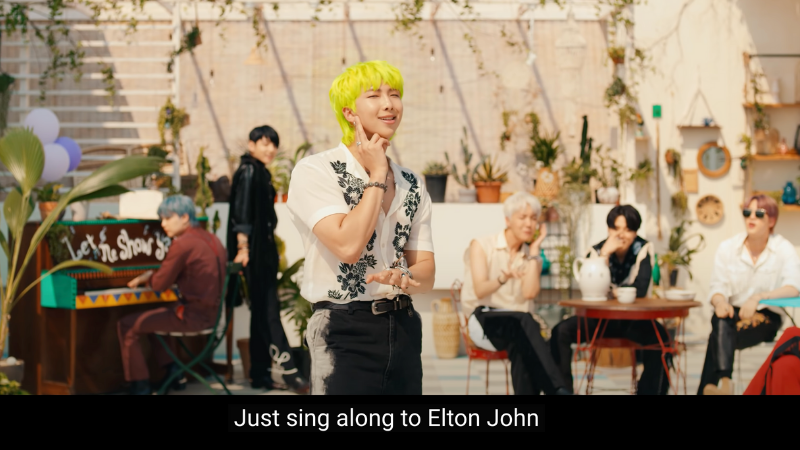 Permission to Dance has a line that goes, “When it all seems like it’s wrong, just sing along to Elton John” — and this didn’t go unnoticed by the living legend himself! Sir Elton John tweeted his own take on the lyrics, tagging BTS’ official Twitter account. Fans even noticed that their official and personal group handles are now among the 21 accounts the English singer follows.

Besides Sir Elton John, BTS has also been acknowledged by Queen, the Jackson family, the Beatles’ Paul McCartney, and Coldplay. Takes a legend to know a legend, after all!

6. It was co-written by Ed Sheeran

Permission to Dance received a lot of buzz before it was even released, as Ed Sheeran prematurely revealed on an Instagram live that he had collaborated with BTS on a new song. (No complaints here, though!) Fans had big expectations, especially given that he had co-written one of their earlier songs, Make It Right, which proved to be a hit.

To make things even more exciting, the songwriting credits for PTD also featured names like Jenna Andrews (who co-wrote Butter), British record producer Steve Mac, and Snow Patrol’s Johnny Mcaid. How could it not have been destined to become a smash hit, right? 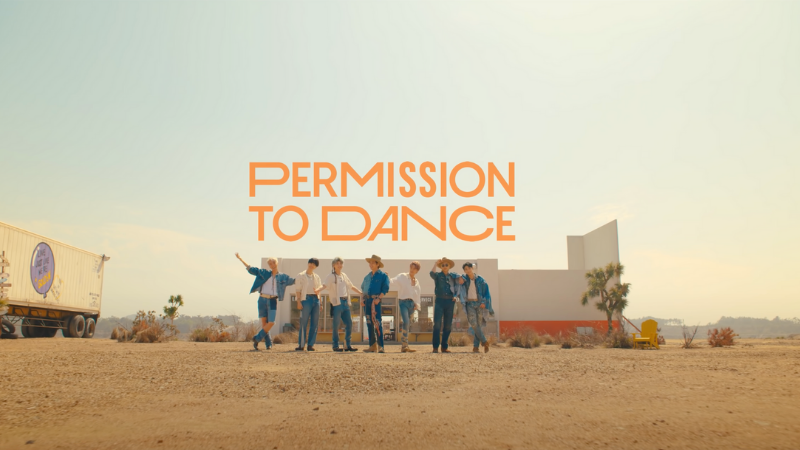 Permission to Dance is the talk of the town nowadays, and it’s no secret that a big reason is because it’s BTS’ third all-English — yes, you read that right —  song. While some would be totally against this (because *gasp* a Korean group singing in English?! We must alert the church elders!), you definitely have to give them props for this. After all, it isn’t easy to get the pronunciation right when speaking (and singing) in a foreign language.

As for those who think this means BTS is turning their back on their native language? These three songs make up a teeny tiny fraction of the hundreds of songs released by the South Korean group. Consider them an entry point to BTS’ discography (a Trojan horse, if you will) for those who aren’t fans just yet.

8. It was a birthday gift to their fandom, ARMY 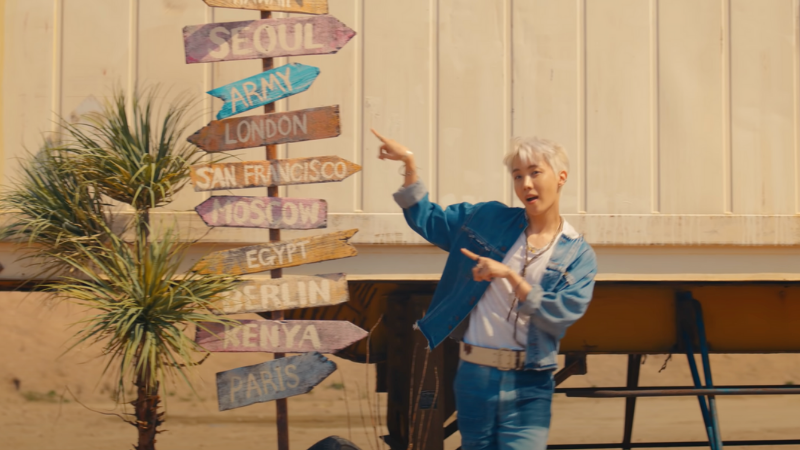 Not a fan? Well, no worries: Permission to Dance is actually BTS’ birthday gift to their fandom, ARMY. On 9 Jul 2021, they celebrated their eighth anniversary, which purposely coincided with the song’s release.

Their Butter CD was actually expected to just have one track. But as a gift to ARMY, the album included Permission to Dance as a bonus track! Instead of simply being a B-side track, PTD ended up having its very own music video, too.

9. “Permission to Dance” is an anagram for “Stories on Pandemic”

And speaking of that BTS-ARMY connection, the music group is actually known to place hidden messages in their music — and these never go unnoticed by their fans. A Japanese fan “decoded” the title, and discovered that with a little rearranging, the letters that form “Permission to Dance” also spell out “Stories on Pandemic.” Goosebumps!

While some people might think this is a stretch, the message of the music video has others thinking this was intentional. Coincidence? It might not be.

10. It’s got a High School Musical vibe (in the best way possible) 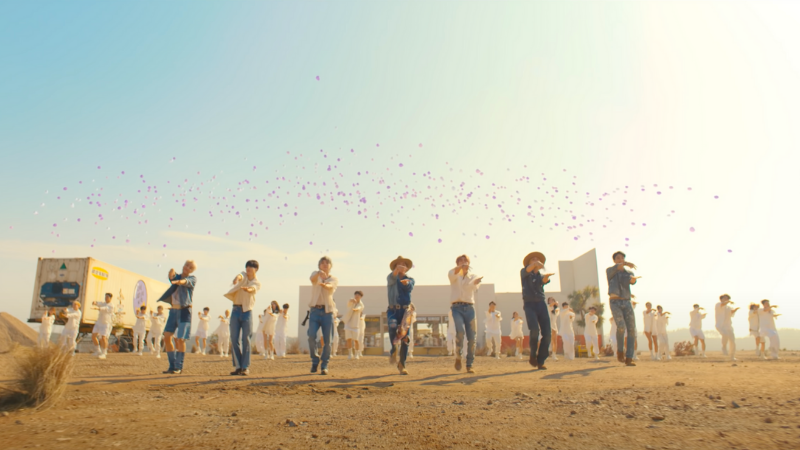 Are you a sucker for happy endings? You know, the cheesy kind where a feel-good song plays, and people might even break into a song and dance. Permission to Dance has just that vibe, and a lot of those who’ve seen the music video have even compared it to High School Musical — it’s sure to get you feeling all fuzzy! (Don’t worry, HSM is our guilty pleasure, too.)

And of course, you don’t even need to read between the lines to discover the song’s simple message: We don’t need anyone’s permission to dance (or do whatever brings us joy, tbh).

Also read: Loved BTS in the Soop? You Can Actually Book the Lakeside Property on Airbnb

Well, now that we’ve gotten you up to speed… BRB, watching the Permission to Dance music video again for the nth time!

Previous ArticleDid Archie Comics Predict Online Schooling in 2021?
Next ArticleSmart Faucet: What It Is & Why You Should Get One