More than 7,500 islands compose the Philippines. Apart from the lush flora that remains untouched by modernisation, the country is home to stunning waterfalls and many of the best beaches in the world. The spectacular tourist destinations in the country are plenty, and caves in the Philippines are fast becoming rising stars in its tourism.

Rich in history, legends, and even myths, caves in the Philippines are mystical as they are beautiful. However, tourists and illegal excavators, who could possibly damage the caves, are a great worry for preservationists.

In 2012, the country placed 158 caves under the protection of the Department of Environment and Natural Resources. This ensures the protection of these caves from vandals, looters, and even treasure hunters. Only experienced spelunkers, researchers, and scientists are granted access to 118 of the caves, while the rest are open for ordinary visitors.

The following caves in the Philippines are open to the public and considered the best for tourism.

Must-visit caves in the Philippines

This subterranean river is a UNESCO World Heritage Site and one of the New Seven Wonders of Nature. People believe that the snaking underwater river is the longest in the world, while the cave also has 8.2 kilometres of navigable waters that flows right out of the West Philippine Sea. You’ll see a limestone karst mountain landscape as you traverse the cave. Given its size, the locals have yet to discover its cavernous parts.

Also read: 8 Enchanting Rivers in the Philippines that Will Make You Skip the Beach

This group of caves in the Philippines is named after the local bird, the Tabon scrubfowl. The cave was also unofficially dubbed the Philippine’s Cradle of Civilisation when the oldest human bones were found by explorers.

The skullcap of a Tabon Man, approximately 24,000 years old, was found in this cave. Items excavated were burial jars, earthenware, and jade ornaments, to name a few. You will find around 215 caves in this area, but only 29 have been explored. Seven of these are open to the general public. The fact that the modern man can step into one of the oldest “homes” in the country makes it more alluring to adventurers.

Also Read: The Tabon Caves: An Enchanting Treasure Of Palawan Everyone Must Disover

Many caves are dark and dank, with bats as the main inhabitants, but Bohol’s Hinagdanan Cave is different. Sunlight filters through the ceiling’s holes, giving the cave a mystic glow. Birds, the cave’s main inhabitants, sleep in these holes.

The area’s owner accidentally discovered the cave. He saw a hole and threw a rock to check it. Thereafter, he found a water lagoon, along with its beautiful stalagmites that add to the cave’s charm.

Swimming is discouraged in the lagoon due to a high level of limestone pollutants. However, some visitors still attempt to jump into its waters.

As the largest cave system in the Philippines, the Langun-Gobingob Cave will take you eight to nine hours to explore. Its karst formation is also considered to be one of the top three largest in the world; the other two can be found in the Nullarbor Plain in Australia and the Shaanxi Province in China.

Several limestone stalactites grow from the cave floor and ceiling, respectively. You can also find rock hills and mountains to climb. Beyond its rock formations, wildlife proliferates here, and you will likely see bats, crabs, and hypogean blind fish.

You can find the Sulpan Cave in San Jorge, Samar. It has an underground river connected to the Blanca River. At its mouth is the Pinipisakan Falls, making the cave entrance as beautiful as its interiors. Stalactites and stalagmites are a welcome sight inside the five-kilometre-long cave chambers.

In the heart of the Island Garden City of Samal are 70 beautiful caves. These caves are home to approximately 1.8 million Geoffrey Rousette Fruit bats, a Guinness world record. The bats may make you shudder, but they will pass when you explore the cave. In addition, the sanctuary has different tours for your exploration, such as the Day Tour, the Bat Cave Day viewing, and the Bat Emergence Night Tour.

Kabayan Cave offers a chilling yet culturally enriching experience. This cave is the home of the Kabayan Mummies, the smoked remains of the local tribes in Benguet. The mummies, also known as Fire Mummies, are preserved through lengthy dehydration and smoking. The caves attract many tourists for their sheer uniqueness and cultural importance. Even researchers gain more insight into the Ibaloi Tribe from their unique mummification process. 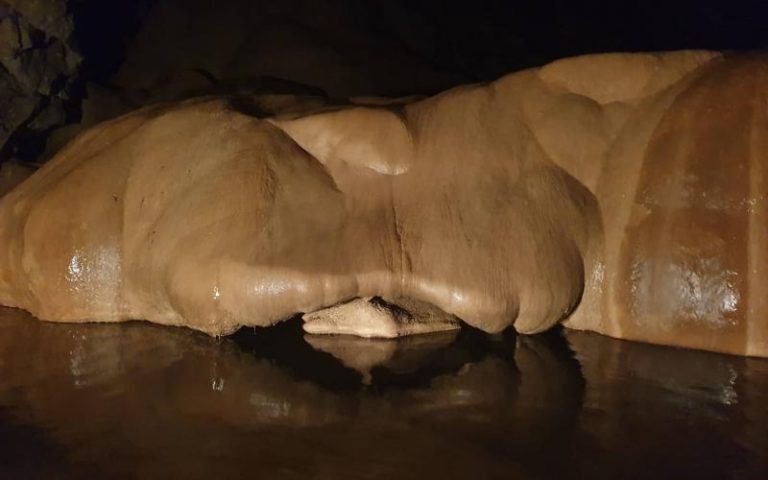 Sagada is famous for its hikes that take you an inch closer to the heavens. But, adventure also awaits underneath its earth. Sumaguing Cave is a good introduction to cave spelunking because it’s beginner-friendly. However, it doesn’t mean the experience is a walk in the park.

Be sure to hire a guide when going through the system. The thrills aren’t cheap in Sumaguing. You’ll constantly and frantically look for a source of light; if you have a tour guide, their lamp will suffice. Once you’re past the dark, you will find many rock formations that make Sumaguing a joy to traverse.

Callao Cave in Cagayan Province is the premier attraction from a system of 300 caves found within the Peñablanca Protected Landscape and Seascape. This show cave needs no spelunking to go through, just climbing a few hundred steps. At the end of the stairs is the first chamber, which also serves as a chapel. Yes, you read that right. The chamber has pews with a rock formation serving as an altar. An opening on the cave’s roof lights up the chapel, creating an almost poetic and reassuring atmosphere that, to many, manifests the presence of a higher being.

Many local cave enthusiasts agree that Lagbasan Cave in Sultan Kudarat is a place of otherworldly beauty. This cave has an entrance so small that only one person can crawl in and out of the cave at a time. Once inside, you will face a 10-metre descent before reaching the massive main chamber. The chamber is as big as a cathedral and holds endless kinds of intricate and beautiful formations, ranging from dripstones to flowstones to cave crystals. Judging from how many unique formations there are, calling this cave in the Philippines otherworldly is an understatement.

Caving has its unique flair, and people have different motivations behind their own cave adventures, but one thing is for sure – the thirst for the unknown is very hard to resist.