This Pinoy Is Recreating Movie Scenes While Travelling

Napuntahan ko na ‘yan! — a line we’d giddily exclaim every time we see destinations we’ve been to in the movies. Nilo Adriano, an OFW based in Saudi Arabia, shares this type of excitement. And, he doesn’t forget to document evidence!

Over years of travelling, Nilo has collected photos upon photos of himself recreating iconic movie scenes. “It all started in 2017, when my wife, some high school friends, and I went to the UK,” he tells TripZilla Philippines. “We visited a friend who lives in Greenwich, London. That friend mentioned that Thor: The Dark World was filmed there.”

“While roaming around, we ran into the place where Thor landed. I immediately looked for a YouTube clip of that scene, took a screenshot, then tried to imitate the scene,” Nilo recalls. “Recreating the movie scene was really fun. We jokingly named me the ‘impos-Thor’. Passersby couldn’t help but laugh at us. When we finally uploaded it on social media, it generated a lot of funny comments from our friends.”

“Since I love both movies and travelling, recreating movie scenes has become a part of our itinerary every time we visit a new country,” Nilo reveals. “I think it’s fresh and original, compared to the usual photos that I’m seeing on social media.”

Like most of us, Nilo and Daisy keep a list of destinations they want to visit. After booking tickets and receiving their visas, the couple starts their research. “Normally, I try to recall movies that I’ve seen. I’d watch them again and take a screenshot of the scene I want to recreate.”

On that note, Nilo shares that he doesn’t limit his travel photos to movies he’s already watched. As we do when we plan our itineraries, Nilo plans for his movie scene shoots.

“Before travelling, I collect screenshots of as many movie scenes as possible. I just keep them on my phone. The more options I have, the better, because not all movie scenes are possible to recreate. Some movie locations are off-limits to pedestrians, others have too many people that it’s difficult to take a good photo.”

Check out his photos below!

Movie scenes from around the world

On his favourite shots and dream destinations

“Out of all my recreated photos, my favourite is the one where I recreated a scene from Fast & Furious 6. Dwayne ‘The Rock’ Johnson is one of my favourite actors and wrestlers,” Nilo tells us. “I also love the city of London! I also think that this scene was the best imitation I have done, as a lot of people commented, ‘Pati kunot ng noo nakuha!’”

“Given the chance, I would love to go to the US. Most of the Hollywood movies are filmed there, especially in cities like Los Angeles, San Francisco, Washington DC, and New York. I would really like to do the Rocky Steps in Philadelphia.” 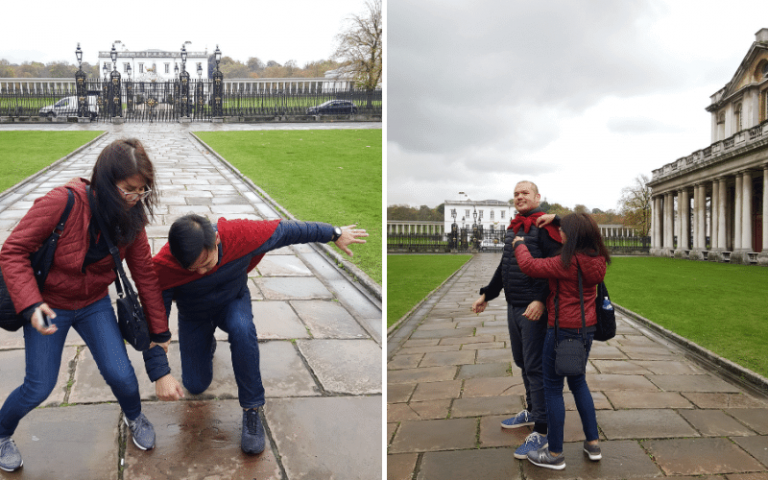 Finally, Nilo spills his secret to recreating great movie scenes: A supportive travel buddy who doubles as his photographer, of course!

“I would like to give credit to my wife for her patience and for going along with this gimmick,” he says. “Some scenes are easy to take, but some really take time to recreate as you have to find the right angle.”

To that, we just can’t help but say — Sana all.

Also read: How To Train Your Boyfriend: On Taking Better Travel Photos Of You

Nilo’s unique travel tradition of recreating movie scenes is just so inspiring, don’t you agree? During times we can’t travel as much, travel photos become even more special to us.

Have you ever recreated movie scenes while travelling? Tag us at @tripzillaph and use the hashtags #TripZillaPH and #LifesATrip. We can’t wait to see your adventures, too!

All images credited to Nilo Adriano.