The humble mountain town of Sagada possesses a duality. On the one hand, it is a great place for a retreat. Yes, it demands a lot of walking, but how many walks have you had while breathing fresh, cool mountain air? At night, most Sagada tourist spots are homely. Outside, you can gather around bonfires while chilling with friends — maybe meet a few new ones too.

But if you know where to look, the thrills of Sagada are unlike anything else. There are Sagada tourist spots that are strenuous and uncompromising. Once you go through them, however, the experience is rewarding.

At the heart of Sagada is the unassuming Ganduyan Museum. Humble as it is, you won’t miss it because it is the only museum you’ll find in town. The museum houses items essential for an Ifugao tribesman’s daily tasks, such as hunting weapons, jewellery, sculptures, baskets, and woven cloth. Tourists can learn more about their history and use it through its curators.

It won’t take up too much of your time in Sagada. The entire museum is small and occupies the entire second floor! And if you’d like to reflect on what you learned, the cafe below is a cosy space to pick brains.

Also read: 10 Best Mountain Cafes in the Philippines for Your Peak Coffee Experience

2. Chill and see the sunset at Lake Danum Viewdeck

Imagine watching the sun set over a lake with some coffee and bread beside a warm fire. Lake Danum Viewdeck offers exactly that and a bit more. It’s a great place to relax and unwind after a busy day exploring the mountain town.

However, securing tables for the best view of Lake Danum can be a competition. The uppermost part of the view deck can only seat so many guests. If you’re willing, ask travellers to share their tables with you. It seems everyone is friendlier in Sagada; chances are, they’ll invite you to join them anyway!

Also read: 10 Airbnbs in Sagada We Can’t Wait to Book

3. Visit the Church of Saint Mary the Virgin for meditation 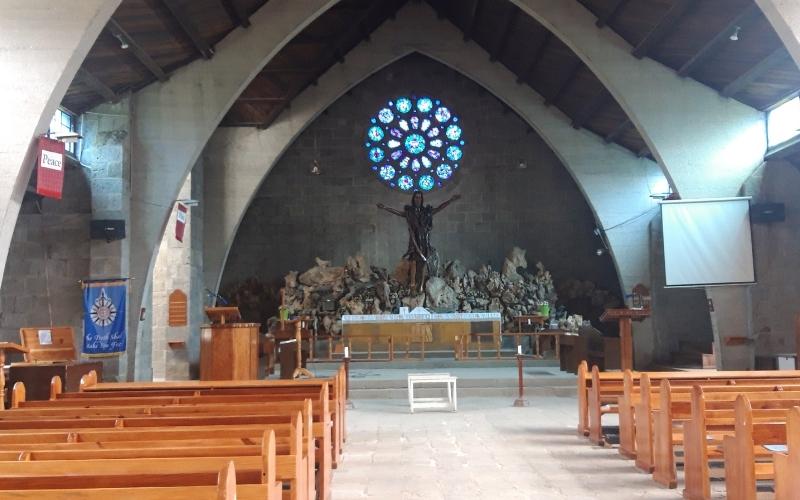 The peaceful air of Sagada sets such an introspective atmosphere. If you’re looking for a bit of solitude, the Church of Saint Mary the Virgin warmly welcomes its visitors. It is also the oldest Episcopalian church in Mountain Province.

It is possibly one of the simplest churches that you can visit in the Philippines. Pine trees surround this church, with a few artefacts placed across its courtyard. Aside from a few stained glass windows, the interior is pretty homely, right down to its altar. Its simplicity is precisely why travellers can meditate in peace inside. 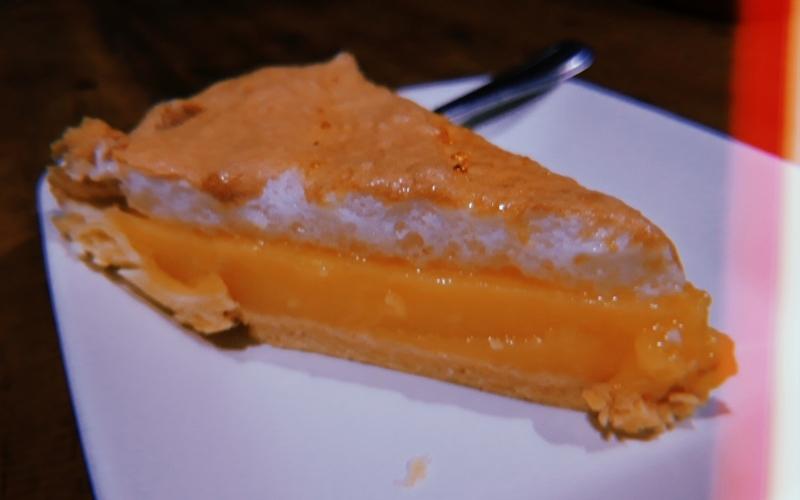 If life gives you lemons, stuff them in a crust and bake a lemon pie out of it! Well, that’s not how the saying goes, but Sagada Lemon Pie House’s version is a welcome variation. It is a delicacy in Sagada, and they use their famous fruit to great effect in this cafe.

These pies are always fragrant and delicate. A bite out of them will perk you up immediately, providing a gentle burst of citrus and lemon zest. This flavour is also infused in its crust and diffuses the tartness. Pair it with lemon tea or brewed coffee!

They also make a great souvenir to bring back home; just make sure to order a day before leaving Sagada!

Also read: Restaurants in Sagada: 10 Places to to Eat, Drink, and Chill

Every weekend, local merchants would gather across the Sagada Municipal Tourist Information Center to set up shop. Goods range from handicrafts like woven fabrics and native trinkets to fresh produce and preserved foods. If you happen to buy goods from them, be sure to ask for tips on how to use the items you bought.

While you’re here, here’s a tip. There’s a good chance that you’ll find etag (smoked native pork) sold here. You can find these all over restaurants in Sagada, and you can take some home with you. It’s a great addition to soups, but be mindful of your portions when cooking because its flavour is strong. 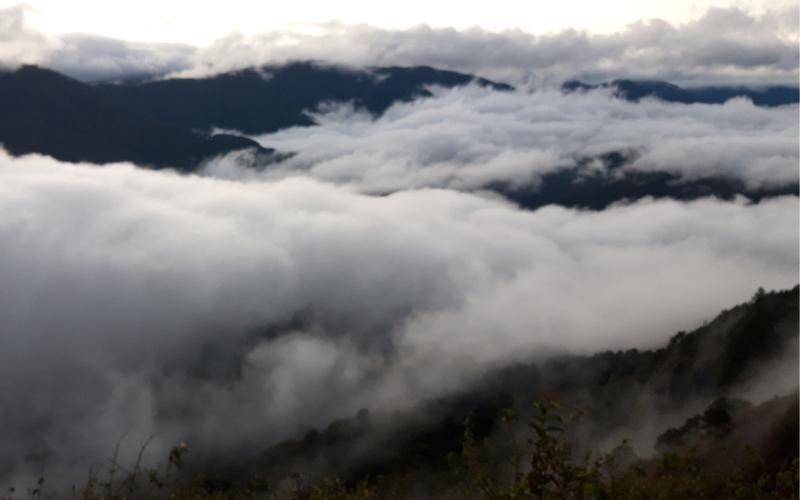 That sea of clouds you see your friends take pictures of? This is it. This is why you go to Sagada!

As early as 4am, hikers get up to one side of Marlboro Hills to begin the trek. Before you begin, there is a small camp at the base of the hills if you need a quick breakfast and some water. It takes roughly an hour to reach the hills’ peak.

What follows is just indescribable beauty. The peak of the hill is high enough to witness a sea of clouds swarming before your eyes. Some people shout at the peak out of pure astonishment. If you’ve made it that far during the trek, we can’t blame you for shouting.

Also read: Sea of Clouds in the Philippines: 10 Places With Breathtaking Views 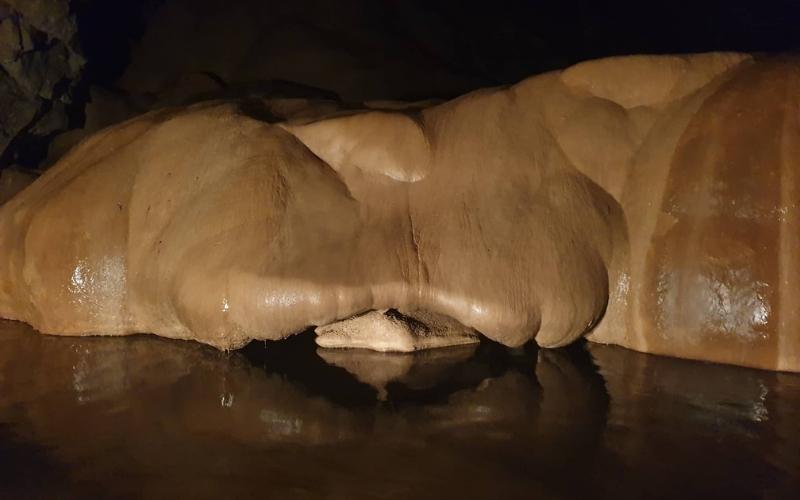 If you prefer your adventures beneath the earth, this Sagada tourist spot covers that too. Sumaguing Cave is one of the more beginner-friendly cave systems in Sagada. But that doesn’t mean it’s easy!

Once your only source of light is the gas lamp from your tour guide, you’ll know you are several feet below the earth. It will seem scary at first, especially when you look around for more illumination. But once you see the intricate rock formations in the caves, you’ll soon realise that it’s fun to shed some light on this underground enigma.

8. Walk through Echo Valley and see the Hanging Coffins

It’s no wonder why Echo Valley is becoming a tourist attraction. Make a noise loud enough and you’ll hear it back as you pass through. However, these valleys are still considered sacred by locals. No one is allowed to pass through here whenever a ritual is being conducted.

But, Echo Valley is also the easiest route to take when trekking to see the Hanging Coffins. This traditional memorial is practised by the Kankanaey people, who reserve the funeral custom for people in the tribe held in high regard. These coffins are usually suspended in cliff overhangs. They are small in size because bodies are mummified in the fetal position.

9. Take a plunge in the fresh waters of Bomod-ok Falls

Making the trek to Bomod-ok Falls is a treat, and reaching it is rewarding. You’ll pass through terraces of fresh crops and lively farmlands on the way. It will take about an hour or two to reach the falls as it is neatly tucked away inside the valley.

Bomod-ok Falls is also popularly known as Big Falls. At an estimated 200ft, it certainly earns the name! The trek may be long, but goodness, Bomod-ok is a sight to behold. Visitors can relax in the shallow parts of the waterfall for a leisurely time. There’s also a 20ft platform where tourists can jump off into the waterfall.

10. Gush over at the sight of Kapay-aw Rice Terraces 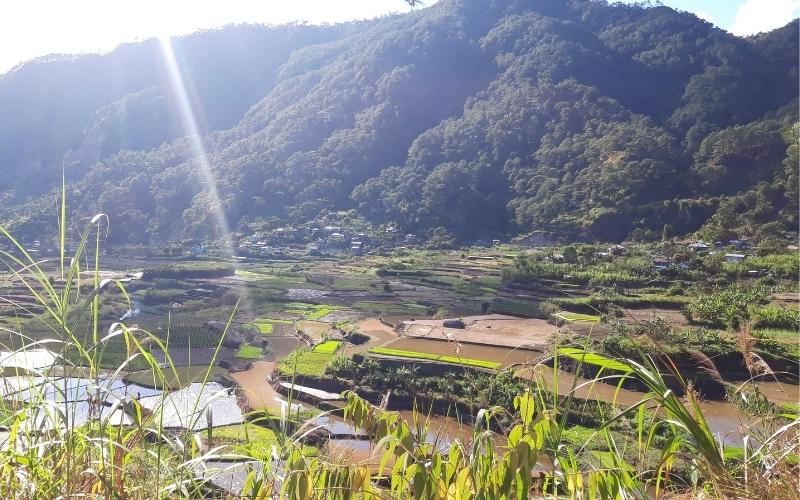 For a more relaxing trek in the mountain town, you can visit Kapay-aw Rice Terraces. Can you believe that this Sagada tourist spot is man-made? These architectural marvels are said to be centuries old but they remain efficient in feeding a nation.

If you can, you should visit the rice terraces before harvest season. The rice crops make the fields flourish with a deep and vibrant green colour, a sign of a bountiful harvest. Now, where was Thanos staying here?

Through an agreement between the Municipal of Sagada and the local village elders, the south zone of Sagada is now open for tourism. On 3 November 2022, the two parties agreed that tourism would help their local economy recover and flourish from the effects of the pandemic. Both parties hope that the rich culture of the villages in Sagada will be preserved and passed on to generations through tourism.

Obwa Canyon, located in Sagada’s south zone, has recently opened for tourist visits. Before the pandemic, only a few people could venture to this hidden lagoon. Also known as Sagada’s Blue Lagoon, Obwa Canyon is best seen during February since its turquoise waters and rugged trails are much more vivid during this time.

One of the most beautiful caves in Sagada is Balangagan Cave. A crystal blue pool greets spelunkers before entering the cave. Following the stream filling the pool leads to the cave’s depths. Once inside, spelunkers can witness surreal, centuries-old rock formations while hearing echoes from bats that reside in the cave’s chambers.

While it is certainly beautiful, Balangan Cave has ancient origins with a cautionary tale that locals strictly heed. According to elders, the cave’s name comes from the three villagers that got lost inside the cave system after a nature spirit warned them not to free bats inside the cave. This is why it is strongly imposed that visitors can’t take anything out of the cave.

The mystery of Taccong Traditional Burial Grounds has always puzzled both locals and historians. These grounds are also found in Balangagan Cave’s system. Like most indigenous burial sites in Sagada, they follow the tradition of stacking or hanging coffins in the cave. However, there are a few placements unique to the cave: some coffins, along with hollow tree trunks and jars with the remains of tribesmen long gone, can be found on levels as high as three-storey buildings. Anthropologists remain confused by this since there are also no known records of how these coffins were transported.

14. Witness an extraordinary sunrise at Pinumdeng

Also read: You Can Now Travel Directly from Manila to Sagada Via This Luxury Bus

For tourists who like their trips and vacations close to nature and without too many intrusions, almost any Sagada tourist spot is a great pick. It all would depend on your preferences, of course. Whether you like a physical challenge that gets you unforgettable rewards or just a nice day exploring a peaceful mountain town, you’ll have the time of your life in Sagada.

Previous ArticleLakbay Museo: Everything to Know About This IG-Worthy Museum
Next ArticleMetro Manila to Catanduanes Bus Trips as of 2022