We’re sure you’ve heard it a lot over the years, but there’s a truth in the saying: “You never forget the first time.” That goes for travelling abroad, too. As beautiful as the Philippines is, we must say: There’s nothing quite like travelling on foreign soil. Wonders you can’t imagine await, new cultures and local food that’s so different to the Filipino flavours we know and love. Nothing beats the thrill of whipping out your passport and going further than you’ve ever gone before, especially when you’re doing it for the first time. Here, some travellers share tales and insights from their first time abroad. The year was 2015, and Harry Bayona was off on his first sojourn to another country, Hong Kong. At the time, he just nabbed a job in foreign waters and was getting on an international flight for the first time ever. And Hong Kong was the perfect destination for a Filipino traveller, a chance to go somewhere every child dreams of visiting.

“I actually went to Hong Kong Disneyland for work, and I stayed there for a couple of months — the travel was just a huge bonus,” Harry recalled. “It gave me the fulfilment of a childhood dream, to sing in the happiest place on Earth!”

This dream job spurred one of the most unforgettable experiences of his life. Career-wise, yes. But also, beyond. Lifelong friends entered his life, people he remains in contact with even years later. And Hong Kong was all new to him, so Harry spent much of his free time exploring. Luckily, the trip stretched on for months, allowing him to look further and deeper than a typical tourist itinerary. There were endless trips to foodie haunts as he hunted down the cheapest roast duck. Every now and then, he made his way to spots that tourists frequently overlook, like the Hong Kong Wetland Park. That said, it wasn’t always easy to live outside the Philippines. After all, Harry’s Hong Kong stint wasn’t just his first trip abroad — it was also the first time he tried living on his own. Like many Filipinos scattered across the world, Harry found it a challenge to spend Christmas away from home. But now, he can look back and see that he emerged from the experience as a much stronger person.

Furthermore, it kicked off Harry’s life of travel. After that first Hong Kong trip and every trip since then, he found his life forever changed. “Travelling is the best form of education,” Harry said, adding that everything becomes real when travelling abroad. “In my case, I learned how to speak Italian and Spanish. I learned that Montenegrins swear with their fathers and not their mothers. I learned that the Spanish are dead serious when they say that siesta is sacred. And I learned Indonesians can eat spicy food without even breaking a sweat.”

Next on the bucket list? He’s never been one to follow the crowd, so his dream destinations are quite unexpected: Afghanistan, Sudan, Somalia, and North Korea. “Call me reckless, call me crazy,” Harry acknowledged but said that he’s happy to embrace the spirit of discovery and see these countries in a new light. Janine has travelled internationally many times, but she won’t forget her first time abroad in Singapore. A fresh graduate and about to dive into the workforce, she shared, “It was sort of a celebratory trip with the family after I graduated from college.”

Travelling to Singapore with family was a memorable bonding experience for Janine, a six-day trip staying with relatives and exploring the tourist attractions. There’s no doubting her favourite parts of her vacation, though.

“Definitely, my first trip to Universal Studios Singapore was a highlight, and the yummy food!” she said.

Also read: How to Travel to Singapore From the Philippines on a Budget “It’s always amazing and interesting to experience places and cultures different from ours for the first time,” Janine reflected. “We get to see and realise that we don’t have to settle for what we have in our country currently. If other countries can go from third world to first world, then we also have that potential.”

After visiting countries that wear their local cultures proudly, she also emphasises the importance of safeguarding Filipino culture. As she explained, “Our culture is an aspect where we can show the world who we are as people. We lose our culture, we lose our identity.” Janine hopes to explore more destinations in the years to come, envisioning a long trip to Europe that will let her see many of the landmarks sitting on her bucket list.

“The dream — and goal — is to travel around Europe for several weeks,” she said. “But that’s a long way off from now, so we’re planning to go back to Bali and Australia next year.”

Also read: The InSydneySider Scoop: What It’s Like Living with the Sydney Locals These days, Dennie is a professional nurse living in Florida with her husband and son. She’s been an American for over a decade, having moved to the United States with her family after graduating from the University of Santo Tomas (UST). Her Vulgar Geniuses podcast explores literary works by authors of colour in and out of the US. But back then, she was a wide-eyed university student venturing out of our archipelago for the first time.

As with any teenager faced with the prospect of something new, Dennie remembered being very excited about the experience of exploring another country. Going halfway around the world is a thrill for any teenager. And a privilege. That’s another thing that she recognised on that very first vacation to the United States.

“I realised, super sheltered pala ako, and travelling is such a privilege,” she said. The trip made her more aware of how costly travelling abroad is, and how it’s a luxury that not everyone can indulge in. “Nowadays, it’s such a flex. You see it on social media. But it’s not always so easy.” 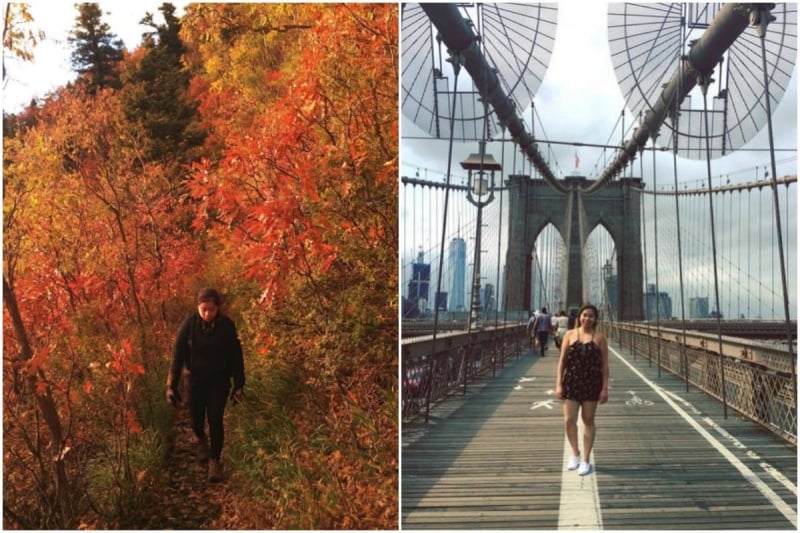 For Filipinos privileged enough to fly beyond the islands, Dennie agreed that there is plenty to learn. For instance, flexibility and a lot of problem-solving. On a not-so-nice note, she added that living and travelling abroad also gave her a real-world understanding of the power of the Philippine peso — or rather, its lack of buying power.

“The world is so big, literally,” she added. “It’s eye-opening, very humbling at times, to be exposed to different types of people. You have to learn to adapt to situations and people.”

Your first time travelling abroad is only the first step. We’re sure you’ll be booking trips left and right after that first time. What was your first out-of-the-country trip? Let us know!

Special thanks to Harry Bayona, Dennie Wang, and Janine Zamudio. All photos credited to the respective travellers.

Previous ArticleMust-Have #HealthGoals That Go Way Beyond Achieving Your Dream Body
Next ArticleThings to Do in Manila: 22 Fun Activities for Every Visitor