You need not be a tattoo enthusiast to be familiar with Whang-od Oggay (aka Maria Oggay), the 104-year-old artist known to be the Philippines’ last and oldest mambabatok. Celebrated as a living legend, Apo Whang-od has inspired countless Pinoys to travel to the remote Buscalan village in Kalinga in order to meet her and — if they’re lucky — get their very own traditional Whang-od tattoo.

So, imagine how surprised a lot of people were to see Nas Academy (an offshoot of Israeli vlog Nas Daily) launch a “Whang-od Academy” course — which anyone could enjoy lifetime access to for just ₱750. Unfortunately, Apo Whang-od and her family were also caught off guard when they learned about the online course. Gracia Palicas, one of Apo Whang-od’s grandnieces and apprentices, took to Facebook to announce that the tattoo artist had not signed any contract with Nas Daily.

In the description for the course entitled Learn the Ancient Art of Tattooing, Nas Academy claimed that the 104-year-old legend would “reveal all her rituals, tools and methods for making traditional tattoos.” According to the website, course materials included three videos — where Whang-od is seen communicating through a translator —  as well as two live sessions with trainers. 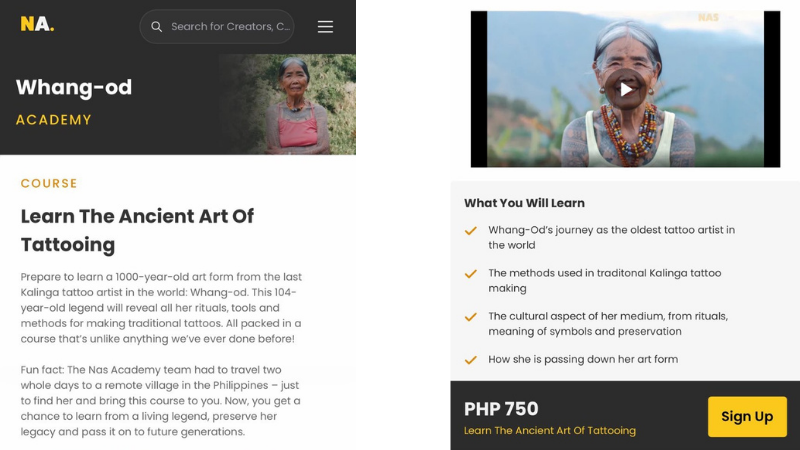 “WARNING!! Whang Od Academy is a scam.My grandmother did not sign any contract with @NasDaily to do any academy,” wrote Palicas on 4 Aug 2021. “Some people are taking advantage of our culture. PLEASE HELP US STOP this disrespect to the legacy of Apo Whang Od and the Butbot Tribe.”

In another Facebook post, she wrote: “Hello everyone. Whang Od academy is not real. I spoke to her and she said she did not understand what the translators were saying. Am sorry to tell you she will not be joining the @nasdaily. I know you have good intentions of sharing our culture to the next generation. However our village concern is that some people are profiting and [exploiting] our art and culture. I know you spoke to someone and gave some monday and will share profits, but Apo Whang Od is not aware of your contract. Hope you sort this out. Thank you and have a nice day.”

Not long after the Facebook posts went viral, the course was removed from the Nas Academy website without any official announcement. On 5 Aug 2021, Nas Daily responded to the Whang-od Academy issue by releasing a video of the Apo Whang-od going through a contract and affixing her thumbprint “signifying her full consent” in the presence of her niece Stella Palangdao.

In the same Facebook post, the vlogger also addressed the course’s removal from their website: “Out of respect for her family, we temporarily took down Whang-Od Academy while we resolve any issues that have arisen from these falsehoods.” Nas Daily has since lost hundreds of thousands of followers on their official Facebook page.

On 17 Aug 2021, National Commission on Indigenous Peoples CAR (NCIP-CAR) Regional Director Atty. Marlon Bosantag travelled to Buscalan and personally interview Apo Whang-od and her family about the issue. His findings were then listed in an official press release shared on the NCIP-CAR’s official Facebook page.

According to Atty. Bosantag, the mambabatok did not give her consent to teach the Whang Od Academy course. She was not aware of any contract, not did she affix her thumbprint in any contract for this account.

Additionally, the NCIP has stated that there is an “apparent disparity” between the thumbprint found on the contract and one that she affixed to a clean sheet of paper for validation. Whang-od’s niece Stella Palangdao also shared that they were only made to sign a contract for filming, interview, photography, and the release of such; no other contract provisions were explained to them.

You can see the full press release below:

Also read: Are You Tired of Pinoybaiting and Pinoybaiters Yet?

How Pinoys are reacting to the issue

With responses that range from condemning the vlogger for exploiting an indigenous culture to demanding that Nuseir Yassin (the man behind Nas Daily) be named persona non grata, it’s clear that Pinoys are disgusted and outraged.

At ₱750, the “Whang-od Academy” course was priced even lower than Catriona Gray’s Learn to be a Queen course, which is priced at  ₱1,450. Not only did Nas Daily put a price tag on an ancient and traditional practice without the artist’s consent — the Butbut tribe’s ancient traditions, which are meant to be passed down to its future generations, were made available for public consumption.

Unfortunately, the Israeli vlogger has already been slammed for exploiting Filipinos and their culture. He has also been known to release content that is often seen as “Pinoybaiting,” among them emphasising how “cheap” the Philippines is, and how foreigners can survive in the country with $0 just by relying on locals’ generosity.

If there’s one thing this issue has made clear, it’s that Filipinos are not at all blind to Pinoybaiting — and they demand for it to stop.

What are your thoughts on the situation? Feel free to join the conversation in the comments section.