Dicasalarin Cove in Baler, Aurora: Two Private Beaches Away From the Crowd

Baler is most famous for its beaches with huge waves crashing down the shores. The mighty waters allure surfers — from neophyte groms to veteran pros — as they seek the ecstatic feeling of getting barrelled underneath the tides. But, unbeknownst to some people, there lies a secluded beach in Baler that’s free from the gushing torrents of the Pacific Ocean. Meet Dicasalarin Cove: a hidden haven on the easternmost point of Baler. There, you will find not just one, but two private beaches, all yours for the taking.

A decade ago, Baler was yet to be considered a go-to tourist destination. I can attest to this, being a Baler local. Our town was once a quiet rural countryside. Back then, Balerianos were the only ones who roamed the streets and frequented the now-famous tourist spots.

With the rise of tourism in the past years, more and more visitors have sought to uncover the natural wonders of Aurora, such as the Sabang beach, the Ditumabo waterfalls, and the Diguisit rock formations. As a result, what used to be an unruffled town is now bustling with tourists who seek what Baler has in store.

No one’s complaining, though. The local economy, anchored by tourism, is booming. Hotels, transient houses, and restaurants have sprouted side by side to accommodate the rising number of guests. People are happy.

If you’re looking to hit the road and visit Baler, I suggest that you go on weekdays or during the lean months. Every peak season, Sabang beach quickly gets crowded during the day, while the bars get jampacked at night. Consequently, you might have difficulty finding a quiet spot to chill and relax.

Unveil the secrets of Dicasalarin Cove

If it’s solitude you seek in Baler, you may find it at Dicasalarin Cove. Amid the tourism boom, it has remained relatively less visited than Baler’s more familiar tourist spots. At least in my experience, I’ve always encountered only less than six groups of tourists in Dicasalarin Cove with every visit. 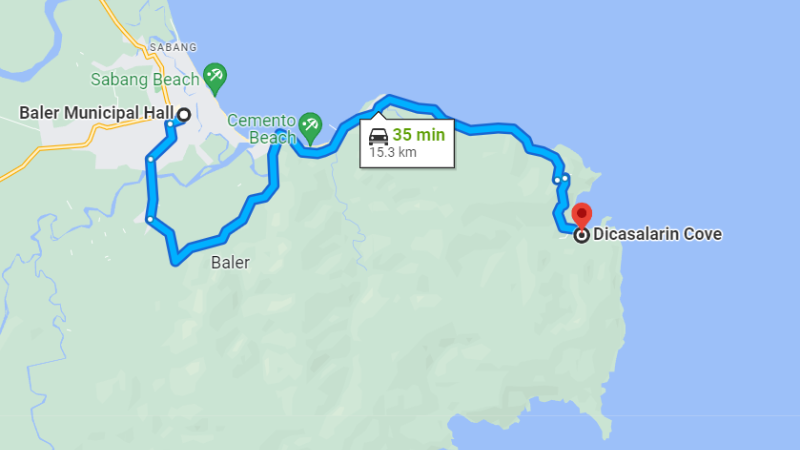 Why, you may ask, is it still unpopulated by tourists? One reason is its location. It’s pretty far off from the Baler centre. Not only that, but right before you get to Dicasalarin, you’ll have to cross extremely steep slopes and sharp turns on a mountain. Remember the winding roads before you got to Baler? Well, the route to Dicasalarin looks similar to that, except with more curves.

But, don’t worry! The route isn’t on a life-threatening level. The drive’s quite an adventure, but safe. The mountain road to the cove is narrow enough to only fit one-way traffic at a time, but guards are on patrol on both ends. From the road entry point to the gates of Dicasalarin Cove, they ensure that the traffic flow only goes one way per turn.

Another reason for Dicalasarin Cove’s limited visitors, including locals, is its entrance fee. FYI, the place is actually a property owned by the Angara family. Hence, you’ll have to pay ₱350 per head to be granted entry. In other words, it’s a private resort.

The road may indeed be a challenging drive, and the entrance fee could be hefty for most. Nonetheless, if you choose to continue, you’ll realise that your travel to Dicasalarin Cove is worthwhile. In my opinion, it’s the most scenic spot in Baler. Plus, you won’t just be paying for one private beach, but two. 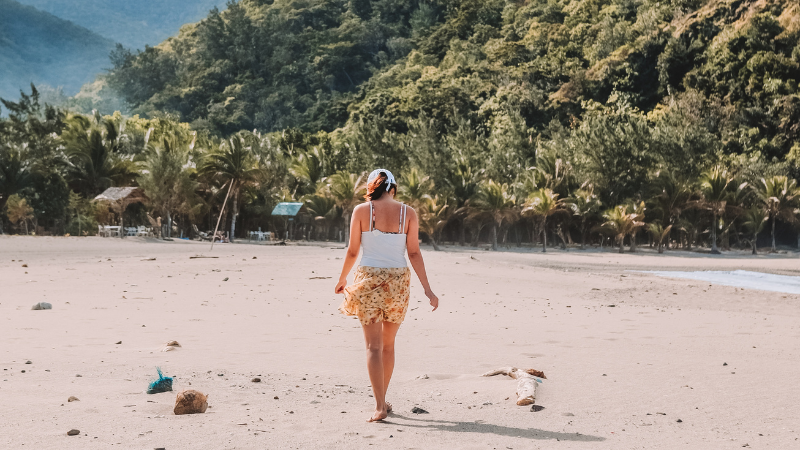 Upon arriving, a garden of trees and vegetation will immediately welcome you. Take a deep breath as you walk under the fringing trees and enjoy the well-preserved forestry of the mountainside.

A little further along, you’ll finally reach the main beach of Dicasalarin Cove. Its powder-white sands and cerulean waters are nothing short of breathtaking. As if painted masterfully, the whole place looks like a photograph, with the crystal sea contrasting the cliff’s lush green canopy. On top of this, tall tropical trees and cosy nipa cottages also dot the area. 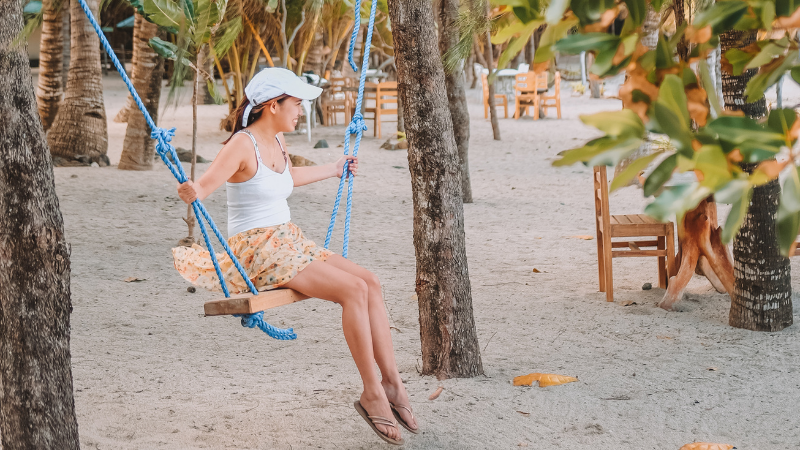 Since Dicasalarin Cove is privately owned, the owners improved a part of the beach with some chairs and swings. Just think about all the conversations you could have here with your barkada! If your definition of a “good time” is a quiet day of reconnecting with your loved ones after being separated for so long, Dicasalarin Cove could take your good time and make it the best you’ve ever had. 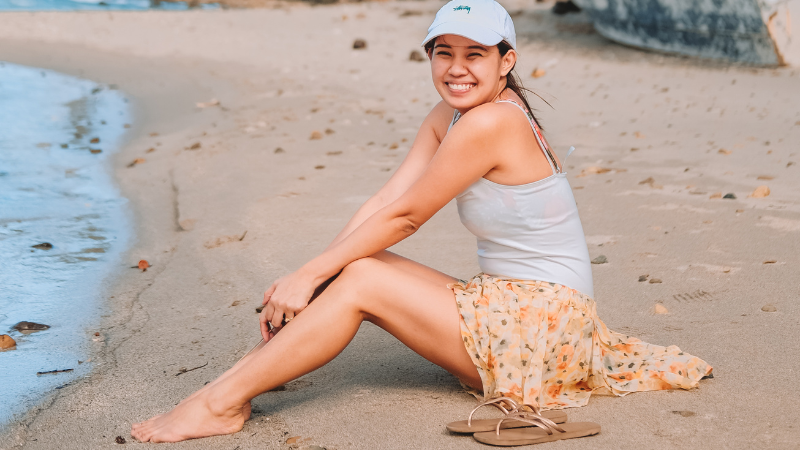 Take off your flip-flops, and take in all the cove’s wonders. Claim it: All the things you’ll be doing here will be worth the drive. Here, you can swim in the tranquil waters without being slammed by strong waves. Take a moment to stay by the shore and dip your feet into the damp sand. 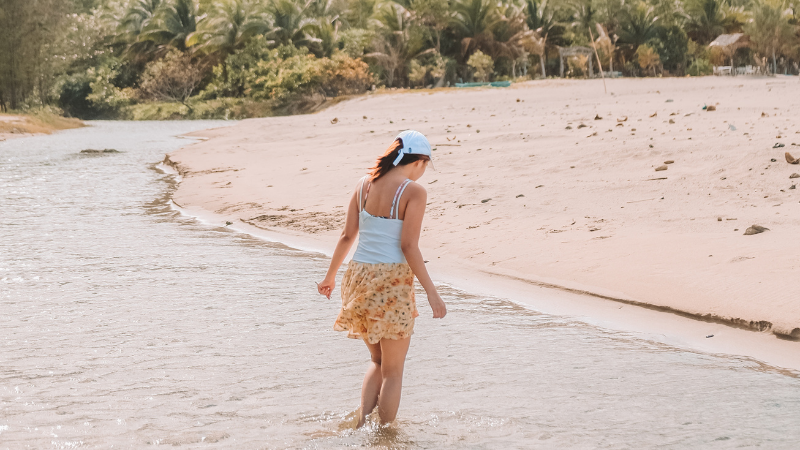 To find the second beach, you’ll have to cross a cold estuary that connects a mountain river to the Pacific Ocean. There, you can let the refreshing water from the river wrap your feet.

Continue to walk along the shoreline until you find a large pathway between two mountainsides cut by erosion. The area is a bit jagged, so it’s best to wear water shoes for protection.

From an aerial point of view, the gap perfectly aligns with the two beaches, so much so that it appears like it was carved on purpose to bridge the separate shores. What an amazing work of nature, don’t you agree?

As soon as you cross the gap, you’ll find yourself on a remote beach tucked between two mountainsides. It’s as secluded and peaceful as you can ever get. Here, there are no cottages, restrooms, benches, or anything man-made, for that matter. Just you and the sea, alone. If this isn’t the perfect place for an afternoon of muni-muni, I don’t know what is.

This beach isn’t the kind that you swim into, though. The sand is full of rocks and corals, with larger ones deeper into the water. Like I said, it’s best for beach bumming and drowning yourself in deep thoughts.

You couldn’t go wrong with either hidden beach in Dicasalarin Cove. But don’t just take my word for it! Dicasalarin Cove is the kind of place best described by your own eyes, and not just by someone else’s. Just a few hours away from home, you can escape all the stresses of the Metro, even for just a weekend.

Previous Article13 Historical Sites in the Philippines Every History Buff Must Visit
Next ArticleKrysten Kaladkarin Tells Us About Ukraine: Her Experiences, Hopes, and Dreams