Contributed by More Than A Backpack

Two newbies, one anaemic and one hopeless case (that’s me).

Sometimes, you just need the willpower to conquer mountains.

Similar to when I went to the Himalayas, as soon as we booked our trip to Kota Kinabalu, I prepared for the trip by doing two local hikes (Mt. Ulap and Mt. Batulao) and visiting the doctor (I was slightly sick for the last two months). Two weeks before our flight, I had my annual physical exam and after some hiccups with my results, it was deemed that I was not unfit to hike.

Even though we arrived early in the afternoon in Kota Kinabalu, we didn’t bother going around the city. We went straight to our lodging, prepared our gear and just went out to eat and buy what we needed. We were asleep early that night and by 6am, we were ready to go!

Also read: How I Spent a Smashing Holiday in Kota Kinabalu for 4 Days & 3 Nights

We started at Timpohon Gate (1,866 MASL) sometime past 9 in the morning and arrived at Laban Rata (3,270 MASL) around 5pm. My friends were walking at my pace, so we were all slow (although they eventually went ahead at the latter part of the trek). A lot of groups arrived earlier and our group was among the slowest.

There were six huts along the route to Laban Rata — one hut for every kilometre (out of six kilometres), although the distance from one hut to the other varies. There are toilets and benches on each hut and a sign on how far is the next one. The route is mostly stairs and large steps. Then when it rained, it became mud.

After around the third hut, one of our mates hired a porter and I was walking a good distance behind from all of them. It started raining when we were around the 4.5 kilometre mark. I had a poncho that kept me dry, except for my shoes which got soaked (even though they were supposed to be waterproof).

It took us almost eight hours to reach Laban Rata. Without taking off my soaked shoes, I had my dinner. I had two servings of dinner and a porridge before bringing my bag up to our room. I was going to go back for another serving but I ended up staying in bed.

We switched off our lights by around 7 in the evening but there seemed to be electricity throughout the night. My bed was next to the window and I could hear the rain most of the night. The room felt stuffed and a little suffocating and it was a relief when someone finally left the door ajar during the night. I was damn tired and although my sleep was more or less sufficient, I kept on waking up to pee during the night.

We were awake by 1.30am and had a small meal before we resumed our ascent at 2.30am. The beginning of the route to the summit is mostly stairs and steps. Near the summit, we were walking on big rocks (the peak is basically a massive rock). Some parts of the route are so steep that you need to use ropes to ascend. We were told that we had to reach the checkpoint by 5am and the summit by 7am. I knew that I was slower than the average so I was determined to keep on walking no matter how slow my pace was. I barely stopped to rest throughout the ascent. We made it to the checkpoint a quarter before 5am. I later learned that they weren’t that strict with the time limits. As long as you’re willing to go up, you will make it to the summit.

The sun was rising when we reached the 8.5 kilometre mark. For a moment, I thought we were already at the summit. We weren’t. But the summit was in sight. We just needed to walk and climb over a few more boulders.

It was cold and windy. When we made it to the summit, my body was warm but my hands were freezing. I brought a fleece jacket on my way to the summit but didn’t use it. My windproof/waterproof jacket over my sports shirt was sufficient to keep my body warm. Unfortunately, I didn’t bring proper gloves. I brought safety gloves which protected my hands while holding the ropes. But since the ropes were wet and there was cold wind, my hands were freezing. Since I had to keep my hands in my pocket, I ended up not taking photos (which was unfortunate for my friend who took my photos).

After waiting in queue to have our photos taken on the summit, we started our descent and made it back to Laban Rata by 10am. After three servings of breakfast, we checked out around at 11.30am and resumed our descent.

Descending was torturous. Imagine climbing down a staircase from 4,095 metres to around 1,200 metres. Our stops were less than five minutes. My knees and thighs were in pain. We all hired a trekking pole for MYR10 (₱120) each at the start of the trek. I didn’t use it on the way up but I leaned on it all the way down.

After what seemed like an endless flight of stairs, we finally made it back to Timpohon Gate at around 4pm. My legs were aching and I was walking funny (it ached for an entire week). This is probably going to be my last hike for the next couple of years.

Also read: Having a Blast in Kota Kinabalu Without Hiking or Beach Bumming 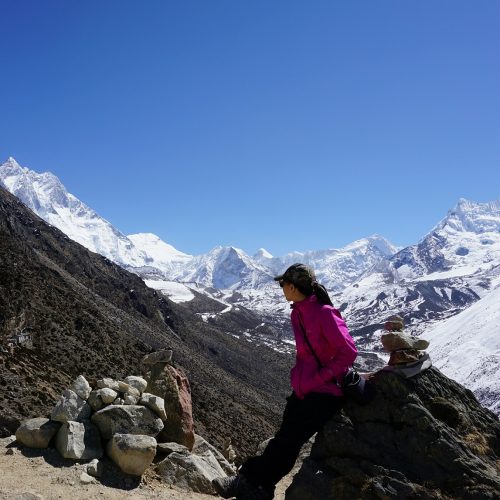 Sammii loves travelling, scuba diving, learning languages and experiencing new things. She has a traditional full-time job in the energy industry and travels intermittently—during weekends, holidays or whenever her boss approves her leaves. She documents her snippets of travelling at More Than a Backpack.