As more people from across the globe continue to get into the Hallyu wave, South Korea is almost effortlessly raking in potential tourists. (Needless to say, we’re among them.) To add to the likes of Seoul and Gangwon Province, we’ve got a new destination on our bucket lists: the coastal city of Pohang, home to a number of Hometown Cha-Cha-Cha filming locations.

You may have heard that Gongjin, the seaside village where the drama’s characters reside, is a fictional town. And if you did, you’ll be comforted to find out that its charming scenes aren’t just make-believe; they’re very much real. Located in South Korea’s North Gyeongsang Province, Pohang is the real-life Gongjin — and you’re welcome to visit!

We had the pleasure of chatting with Dan Arinzana, a South Korea-based Pinoy who got to travel to the tVN drama’s filming locations in Pohang. Below, he shares his account of this memorable experience with TripZilla Philippines. Keep reading to find out more!

A long-time K-drama fan himself, Arinzana gets to live out many a Pinoy’s dream: working and residing in the Land of the Morning Calm. Employed as a factory worker, the 30-year-old has been living in Korea since 2019. He’s currently based in Yangsan, a city in South Gyeongsang Province located between Busan and Ulsan.

“I’ve been a K-drama fan since Endless Love days,” Arinzana told us. “Although learning the Korean language is not a piece of cake for me, having the chance to work and live in Korea is a huge opportunity for me to live the dream that I wanted.”

Valuing work-life balance, he would usually make it a point to visit different places on weekends. “But due to company restrictions due to the coronavirus pandemic, I’m not allowed to travel as much as I want to,” he said. Thankfully, he was able to squeeze in a trip to Pohang to see some filming locations from Hometown Cha-Cha-Cha, a drama he’s been enjoying since it first premiered.

The first step? Research! “I was able to find some of the filming locations through blogs and Instagram,” Arinzana shared. “Of course, you cannot just search it in plain English. You have to search in Korean characters, for example: 갯마을 차차차 촬영지.’” From time to time, he would also browse forums for updates about the drama.

And with that, all he needed was to make time and navigate his way there. “With the help of Papago for translations and Naver Map for navigations (trust me, this app is way more accurate than Kakao Map and Google Map), I was able to find my way to these locations.”

It was during his five-day Chuseok (Korean Thanksgiving) holiday that Arinzana finally found the opportunity to make his way to Pohang. 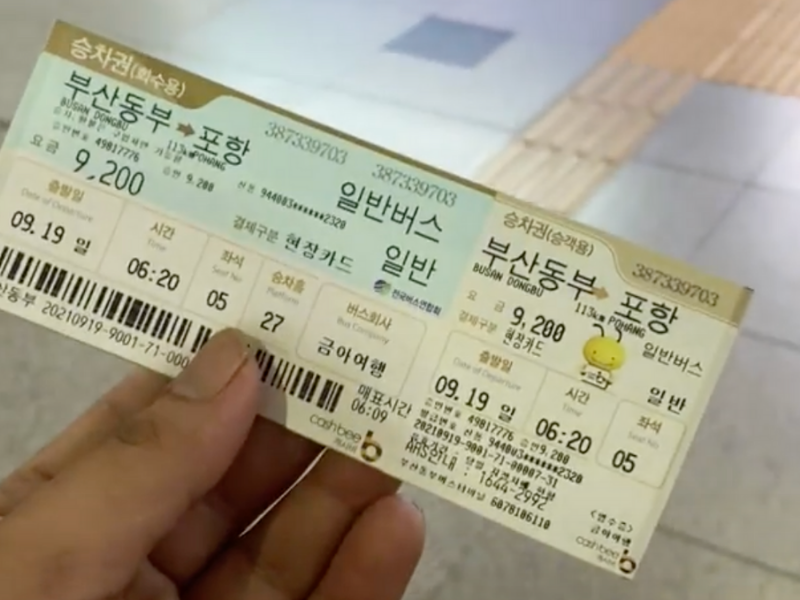 From Busan Central Bus Terminal, he took the first trip (6.20am) and was in Pohang within two hours. “May mga kakilala ako sa Facebook group at mga na-meet ko sa mismong location, it took them four hours from Seoul just to see the location,” he said. “Meron ding nag-stay sa Pohang for a couple of days since marami namang pension houses and accommodations within the vicinity. Yung ibang kasabayan ko, may dala pang kotse.”

According to Arinzana, he was able to visit several filming sites in just three to four hours. He then returned to Pohang the next weekend to see the other half that he had initially missed.

He also shared a fun fact about Pohang: “Interestingly, Pohang City’s size is almost two Metro Manilas. That’s why, some of those who visited all the said locations recommend at least two days to visit all the locations.” His advice for anyone planning to visit? “Tiyagaan lang sa paglalakad at paghihintay ng village bus!”

1. Gongjin Market and its surrounding areas 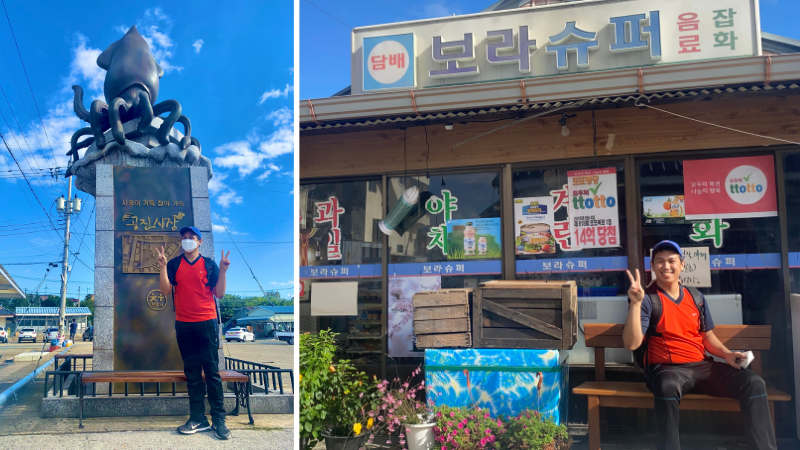 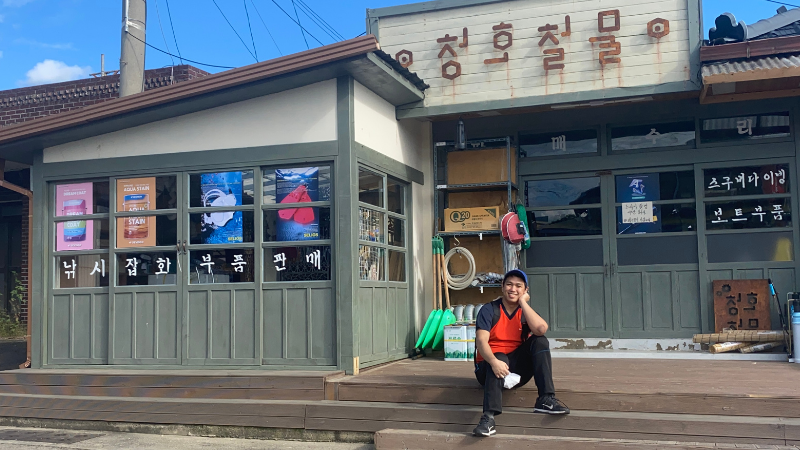 Within the vicinity, you’ll also find Bora Supermarket, the neighbourhood hardware store, and other stalls shown in the series.

“I was asked kung bakit raw parang ang lungkot ng vibe sa Gongjin Market. I mean, empty. And the Bora Supermarket, closed, pero may mga paninda sa loob,” said Arinzana. “Some of the stalls there were not operational that time, since it was Sunday morning nung pumunta ako. Dito sa Korea, there are designated market days depending on the area/village.”

2. Coffee in the Middle of the Day and Beer in the Moonlight 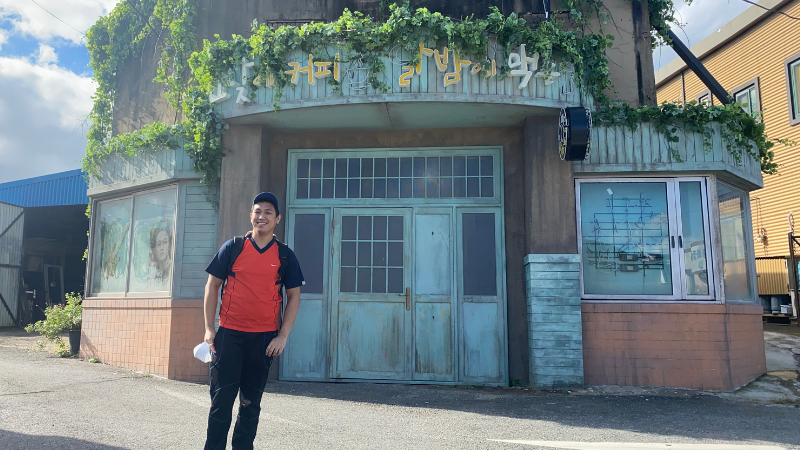 Just within the same area as Cheongha Market, you’ll find one of Hometown Cha-Cha-Cha’s most iconic spots: everyone’s go-to coffee shop! Coffee in the Middle of the Day and Beer in the Moonlight (yup, what a mouthful!) looks just like it does in the drama — on the outside, at least.

“The coffee shop was custom-made for the drama, I think,” Arinzana shared with us. “Pagkakita namin sa loob, hindi talaga siya coffee shop. If my memory serves me right, mga pintura at mga kahoy ang laman sa loob.” So no, unfortunately you can’t enjoy a cup of coffee at the cafe; but you can take advantage of the photo op, complete with Oh Yoon’s photo in the window! If only we could make an appointment with Dr. Yoon Hye-jin! 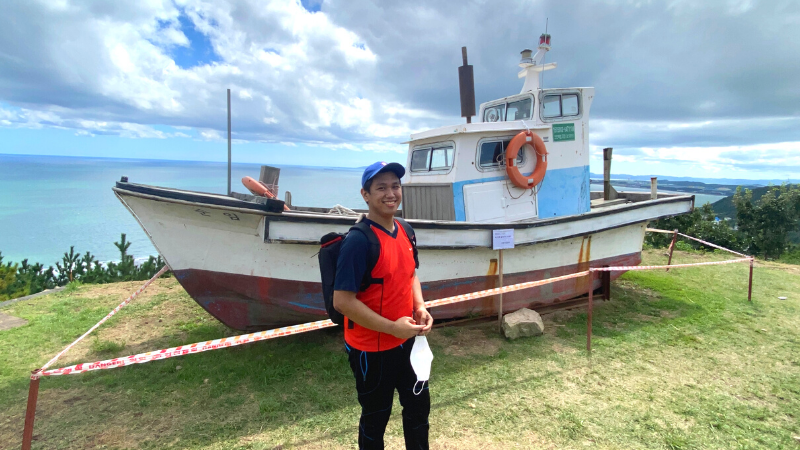 Look familiar? This boat, located at Sabang Memorial Park – Mugeunbong Peak, is where Hye-jin meets Chief Hong (for the nth time) at the end of episode one! According to Arinzana, it’s just metres away from Yoon Dental Clinic. “From the clinic, walk towards the road until you reach the entrance of the park. You can climb the mountain using stairs until you reach its peak.”

The traveller shared that out of all the Hometown Cha-Cha-Cha filming locations he visited, this particular one would have to be his favourite. “From this point, you can enjoy a 360-degree view of the beauty of  Pohang, which is surrounded by the sea on one side and the mountains on the other side.”

A word of warning, though: It takes a bit of a hike to get there! “You need to use the stairs para makaaykat sa tuktok nun; parang twice as the Lourdes Grotto Steps sa Baguio yung pagpanhik. So literally, nakakahingal. And for less than a year, hindi ako nakapamundok — but it was fulfilling” Arinzana recounted.

Also read: Kim Seon-Ho Is Currently in Talks to Star in His First Film 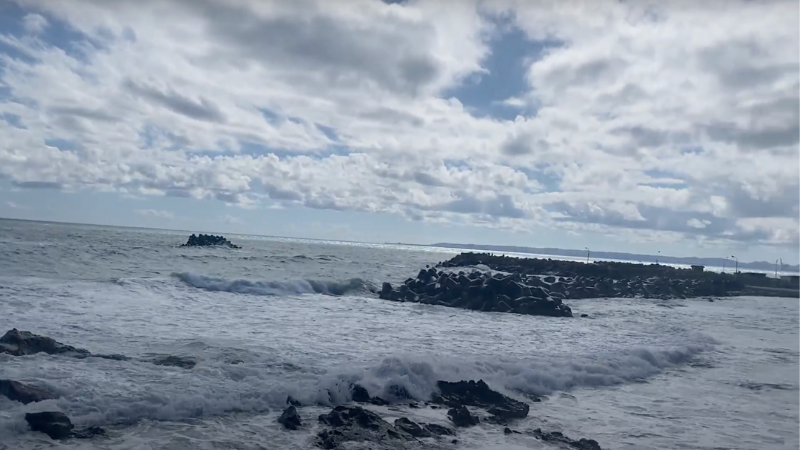 Last but not the least on Arinzana’s Hometown Cha-Cha-Cha trip: Wolpo Beach. This is where Hye-jin and Du-sik first meet. It’s also where Du-sik goes surfing during his free time! (Oh, how we wish we could spot him there, too.) 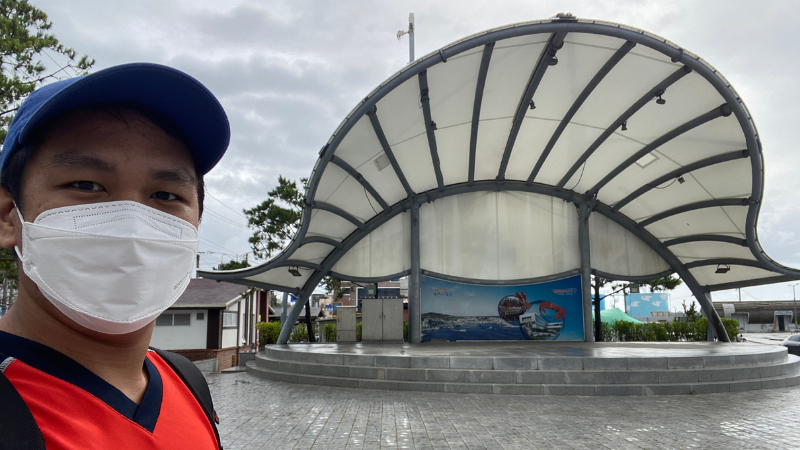 Remember this spot? To refresh your memory, this is the place where Gongjin held their annual music festival — it’s where Ju-ri, Hye-jin, and Du-sik performed their hilarious song and dance routine in episode six!

Ara Plaza marks the second half of Arinzana’s visit to the Hometown Cha-Cha-Cha filming locations.  “These were located at the other side of Pohang City — parang from north to south of Metro Manila,” he told us. “According to my navigation app, it’s two hours away from Sabang Memorial Park if you are going to commute.”

To get there: “From Pohang Intercity Bus Terminal, I took bus 900 going to Seokbyeong 1 Ri Breakwater. Familiar na sa akin yung place since I’ve been there for the filming location of When Camelia Blooms in Guryeongpo Japan House Street na halos nasa tapat lang ng stage.” 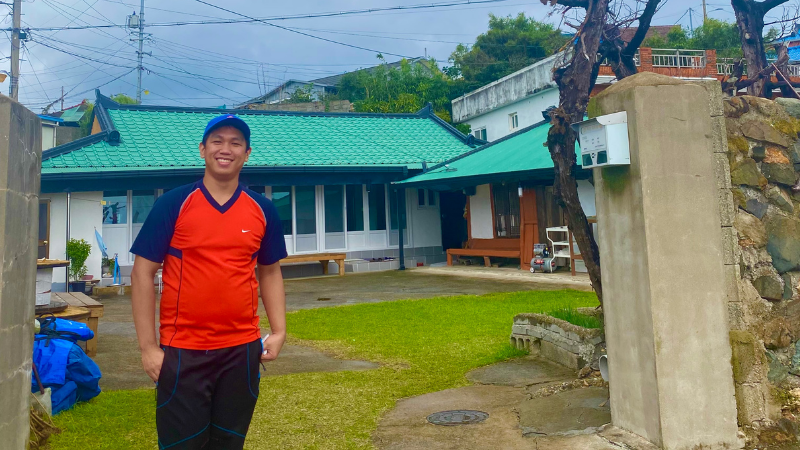 Hong Banjang, are you home?

From Ara Plaza, it’s another bus ride to get to Hong Du-sik’s house. Thankfully, the trip there is worth it, as it’s also located close to Hye-jin and Gam-ri’s houses. “From the bus stop, I took bus 9000 (different from bus 900) going to their residences,” said Arinzana.

Note: The houses that served as Du-sik, Gam-ri, and Hye-jin’s house were rented for the series. They are actual residences, so visitors are asked not to enter the homes and respect the owners’ privacy. 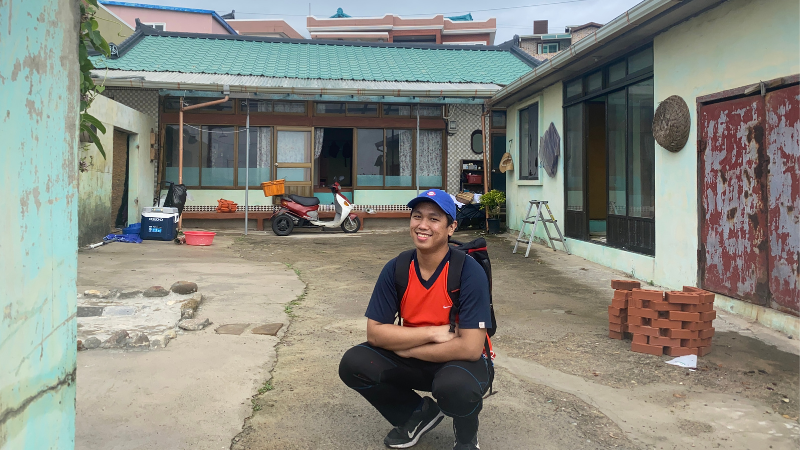 Just a short distance from Du-sik’s house, you’ll find everyone’s favourite lola’s house! We wish Gam-ri was there to serve guests with delicious home-cooked meals, too. 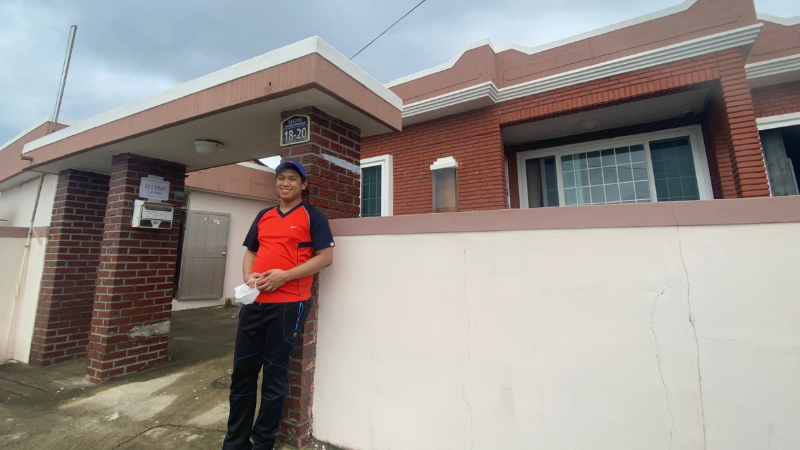 Hye-jin and Mi-seon’s house is also just within walking distance. From there, you’ll also be able to take in views of the sea — plus, the red lighthouse that was featured in the series! 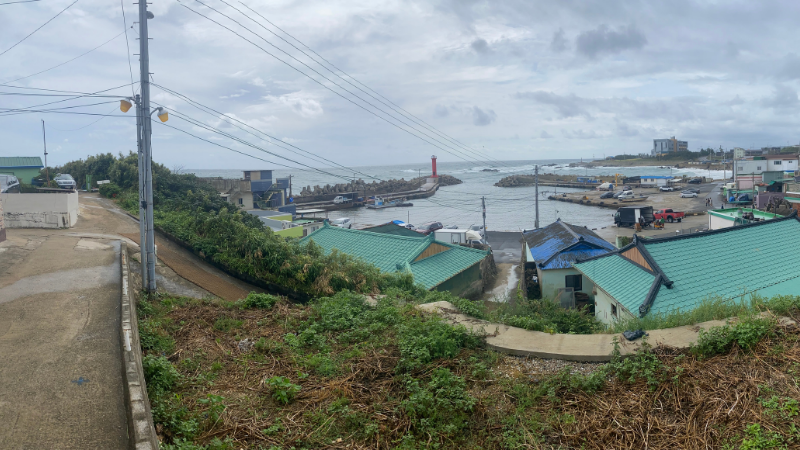 Outside the house, you’ll even get to see the very walkway where Hye-jin ran into Chief Hong’s arms! *Swoons* 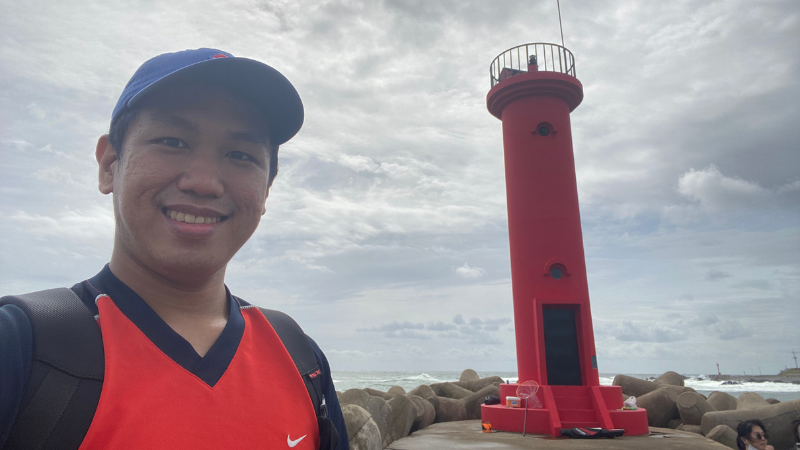 Arinzana also got to visit the red lighthouse up close, as it was pretty close to the above-mentioned Hometown Cha-Cha-Cha locations as well. This is the spot where Chief Hong and Director Ji’s bromance first began!

Arinzana was also able to visit Gongjin’s village hall, although he was in for a surprise when he made it to the venue.

“As I navigated my way towards the community center, I didn’t expect that I would witness the actual filming of the drama! A lot of drama staff were there, telling us not to get near the centre, take pictures, or even make unnecessary noise. Of course, a lot of local tourists were there, lining up and waiting if they could see some of the cast.”

Excitingly, Arinzana was able to catch a glimpse of Shin Min-a, Kim Seon-ho, and Byun Seong-tae (who plays JUNE of DOS). On spotting Seon-ho, he shared: “In fact, we were noticed by him, smiled and waved at us.” We’re so jealous! 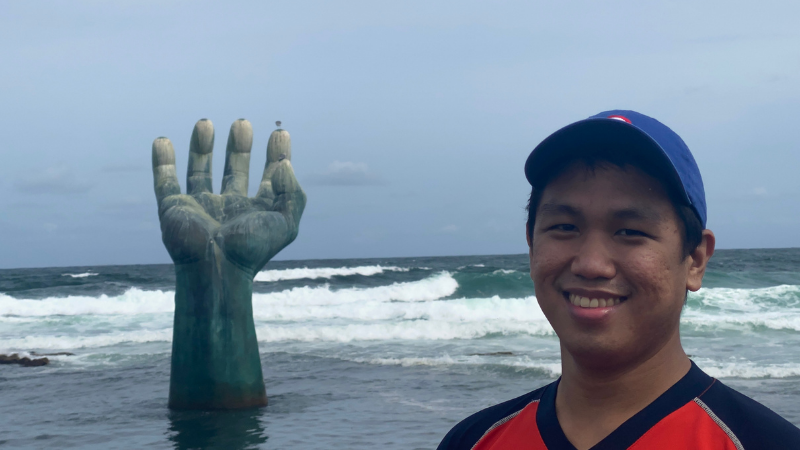 Homigot Sunrise Plaza is 20 minutes away from Seokbyeong 1 Ri Breakwater. While this particular spot isn’t a Hometown Cha-Cha-Cha location, it’s a bonus for Kim Seon-ho fans. It served as a filming site for an episode of the variety show 2 Days 1 Night, which Seon-ho co-hosts!

Also read: Kim Seon-Ho & Girls’ Generation’s Yoona to Star in a Film Together 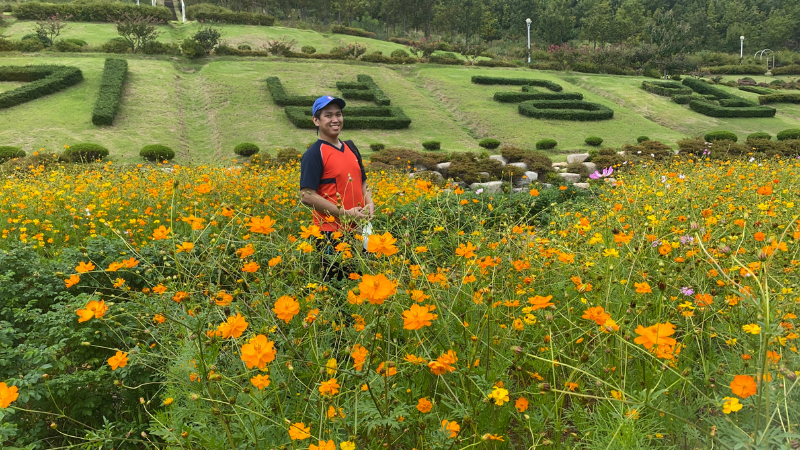 We loved getting to travel to Gongjin vicariously through Arinzana’s photos, didn’t you?

All images credited to Dan Arinzana. The quotes above have been edited for grammar, clarity, and flow.

Previous ArticleSapinit Road: The Little Baguio of Rizal in Antipolo
Next ArticleDonate a Book, Get ₱100 Off Your Next Order at The SM Store