10 Kilig K-Dramas We Never Get Sick of Watching

Here’s something many of us can agree on when it comes to K-dramas (particularly kilig K-dramas): They’re able to make the littlest moments extra swoon-worthy. Whether it’s intense eye contact, the very first time the lead couple holds hands, or just even a pat on the head or a kiss on the cheek — the simplest gesture will effortlessly have you squealing or giggling to yourself!

When times get tough or you’re in dire need of de-stressing, sometimes a cute K-drama is more than enough to put you in a good mood. So without further ado, let’s get right to it: Here are some of the best K-drama romcoms for a dose of kilig! 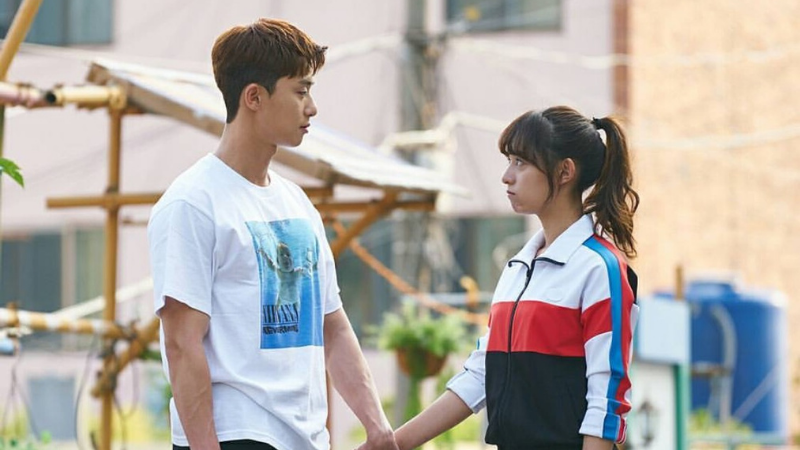 PSJ fans, you’re in for a treat! Featuring Park Seo-joon (aka South Korea’s king of romantic comedy) and Kim Ji-won, Fight for My Way remains to be one of the best-loved kilig K-dramas to date. Personally, I keep finding myself comparing every K-drama romcom I watch to this one!

Long-time best friends Ko Dong-man and Choi Ae-ra have long been settling for less in terms of their careers, but have finally decided to chase bigger dreams — for Dong-man, it’s to debut as an MMA fighter, while Ae-ra longs to become a big-time announcer. As they struggle to achieve their goals together, an undeniable romance starts to blossom between the two. If you’re a big fan of the best-friends-to-lovers plot, this is one K-drama you’re sure to love! 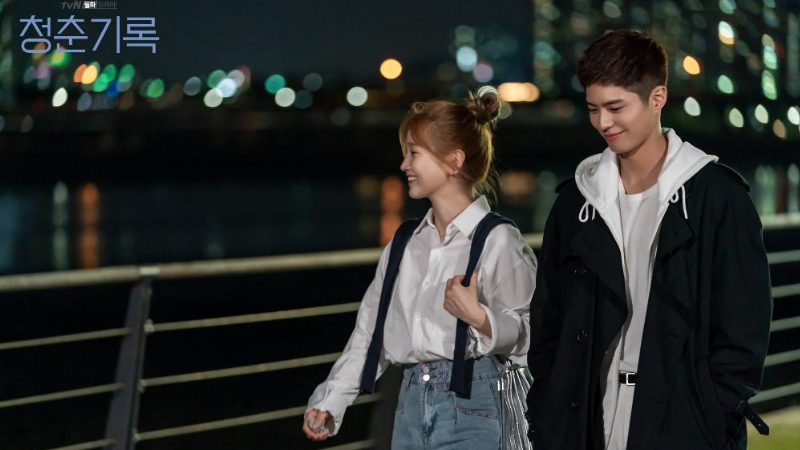 Ever wish you could meet your celebrity crush IRL? That’s basically what Record of Youth (ROY)  is all about. Sa Hye-jun (Park Bo-gum) is a model and aspiring actor, while An Jeong-ha (Park So-dam) is a makeup artist and longtime Sa Hye-jun fangirl. She hits the jackpot and gets to do his makeup for a big fashion show, and this makes for an adorable meet-cute!

Trust us, ROY will get you kilig from episode one. The culprit? Bo-gum’s insanely romantic gaze, which you’ll get to feast your eyes on just minutes into the drama. *Swoons* 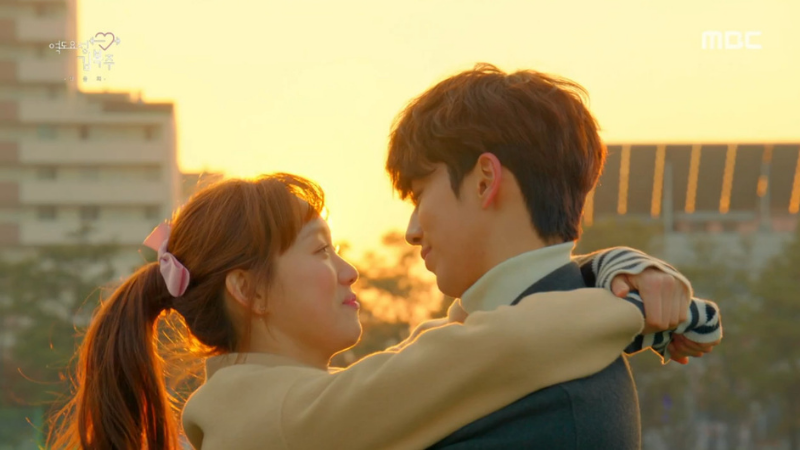 On my hunt for light, kilig K-dramas, Weightlifting Fairy was one of those most frequently recommended to me. Starring Lee Sung-kyung and Nam Joo-hyuk, this college romcom is about two athletes from a sports university: star weightlifter Kim Bok-joo and talented swimmer Jung Jun-hyung. Soon after bumping into each other at school, the two realise they go all the way back to elementary school — back when Kim Bok-joo, never known to be a girly girl, was nicknamed “Chubs” by her peers.

Jun-hyung is quick to pick up where they left off, and teases her relentlessly; he sees her as one of the guys, while Bok-joo simply thinks he’s utterly annoying (and possibly ruining her chances with her crush — his older brother). The not-so-surprising plot twist? Jun-hyung eventually finds himself attracted to Bok-joo, of course. 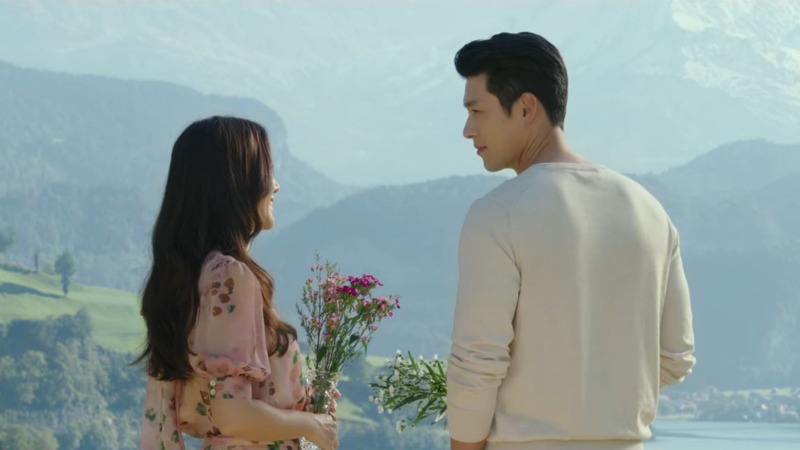 Of course, this list of kilig K-dramas couldn’t possibly be complete without Crash Landing on You CLOY) — the K-drama that sparked the heightened K-drama craze of 2020. In CLOY, South Korean heiress Yoon Se-ri (Son Ye-jin) crashes into North Korea due to a paragliding incident. There, she meets Captain Ri Jeong-hyeok (Hyun Bin), after literally falling into his arms. How’s that for a meet cute, right?

Jeong-hyeok (aka Captain Ri) helps Ye-jin strategise how to make it back across the border, providing her a place to hide — his home — in the meantime. Although their personalities clash in the beginning, we all know how it goes: familiarity breeds liking, and the two fall in love. And despite that this would inevitably end in their separation, Captain Ri does everything he can to make sure Ye-jin gets back home.

Also read: K-Drama Bucket List: 17 K-Dramas That Will Take You Around the World 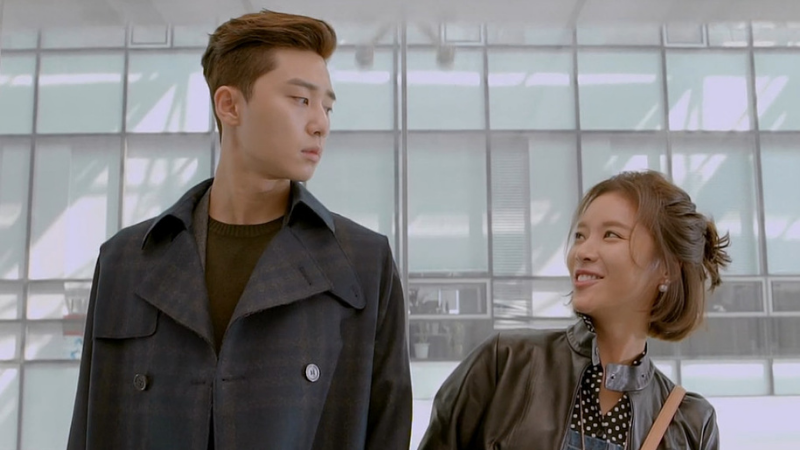 You know what makes a kilig K-drama extra cute? Knowing it was based on a true story! In She Was Pretty, Jo Sung-joon was an unattractive, chubby kid with low-self esteem; Kim Hye-jin, on other hand, was the pretty rich girl who befriended him. While there was something special between the two, Sung-joon soon moved away to the US.

Fifteen years later, he returns to Korea and the two plan to reunite. The catch? The tables have turned: Sung-joon (Park Seo-joon) grows up to be handsome and successful, while Hye-jin (Hwang Jung-eum) is no longer the attractive, well-off girl she used to be. Ashamed, she asks a friend to impersonate her and tell him she’s moving away to England. Things backfire when Hye-jin starts a new internship at a magazine and discovers that Sung-joon is the main editor… 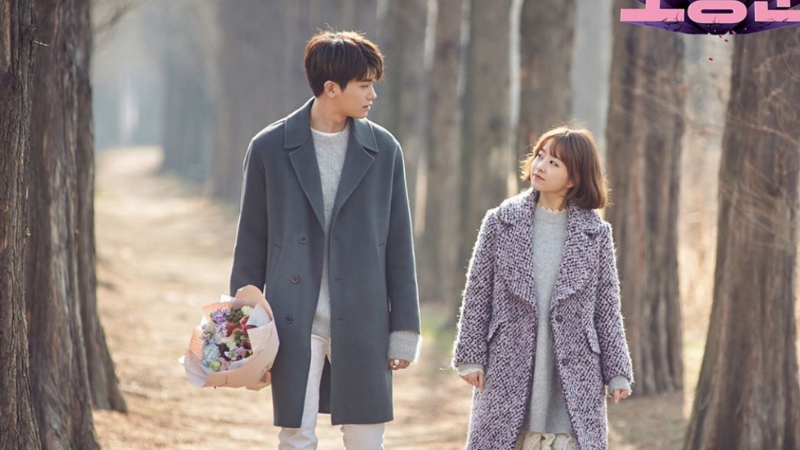 If you liked Weightlifting Fairy, then chances are you’ll love Strong Woman Do Bong-soon, too. (Girl power!) It’s definitely not your average plot; but that’s perhaps what makes it so charming.

Do Bong-soon (Park Bo-young) was born with superhuman-like strength; however, she wishes she were dainty and elegant — the type of woman who’d get her crush In Guk-doo’s (Ji Soo) attention. An Min-hyuk (Park Hyung-sik), on the other hand, is a rich heir and CEO of a video gaming company, who has been receiving anonymous death threats. Upon witnessing her beating up a group of gangsters, he enlists Bong-soon’s help and hires her as his bodyguard.

She agrees, as this job could help her achieve one of her dreams: to create a video game based on herself and her “superpowers.” As their lives become more and more intertwined, however, her motive behind protecting him inevitably changes. 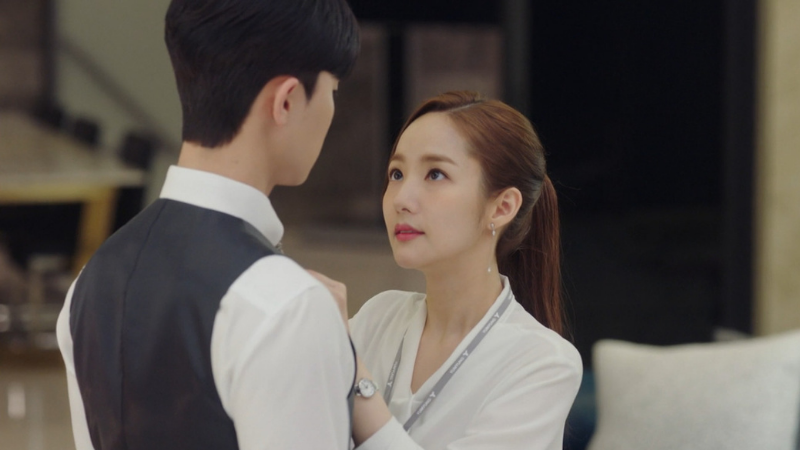 Based on a novel of the same name, What’s Wrong With Secretary Kim? (WWWSK) stars Park Seo-joon and Park Min-young. After competently working as Vice Chairman Lee Young-joon’s secretary for the last nine years, Kim Mi-so lets him know that she plans to resign.

Stating that it’s finally time for her to live life for herself, the self-absorbed Young-joon refuses to believe her. Instead, he’s convinced that Mi-so is actually in love with him and can’t stand seeing him with other women. Realising he basically won’t be able to function without her, Young-joon is determined to do everything he can to make Mi-so stay. 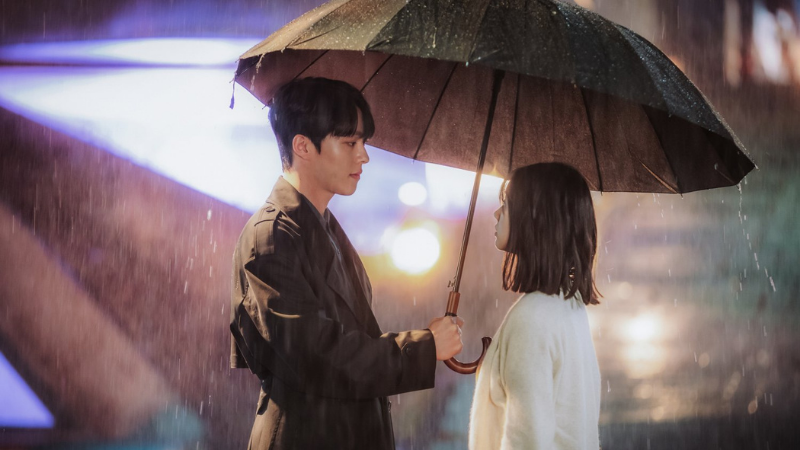 How about a kilig K-drama with a touch of the mystical? In My Roommate Is a Gumiho, model-turned-actor Jang Ki-yong plays Woo-yeo, a college professor and 999-year old gumiho or nine-tailed fox. After collecting human energy in a bead for nearly an entire millennium, he’s finally earned enough to become fully human. That is, until a college student named Lee Dam (Reply 1998’s Hyeri) accidentally swallows his bead.

Not only has Dam taken away his shot at becoming human — swallowing a fox bead is basically a death sentence for humans. Woo-yeo is then forced to be honest and explain his situation to Dam, and proposes that they live together until they arrive at a solution. The catch? Dam has never had a boyfriend in her life, and she certainly never expected to live with a man before even getting into a relationship with one. 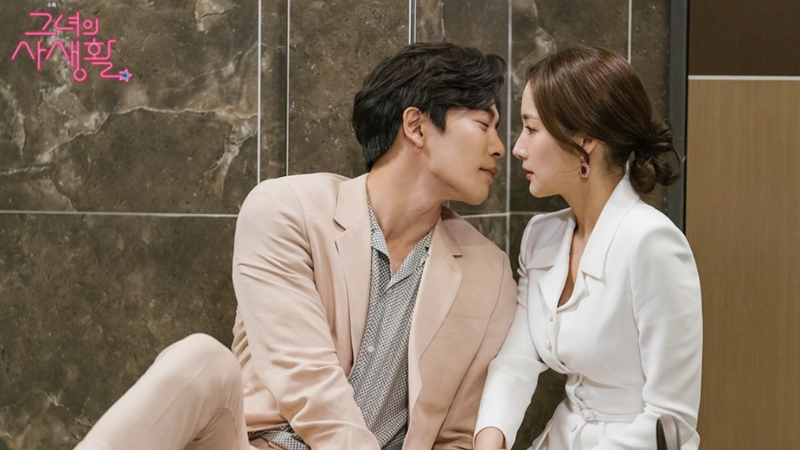 One of my personal favourite romance tropes? The fake boyfriend/pretend-dating plot. Her Private Life offers just that, with some K-pop idol fangirling added to the mix. Dedicated K-pop stans will definitely relate to this one!

Sung Deok-mi (Park Min-young) works as a curator at an art gallery while secretly managing one of the biggest fan sites for K-pop idol Cha Shi-an (Jung Jae-won). When her identity is revealed and rumours break out that she may be dating Shi-an, his fans start coming after her. Her new boss, art director Ryan Gold, suggests that they pretend to date in order to ward them off. But to make matters even more challenging, the admin to her rival fan site starts working at the gallery, forcing Deok-mi and Ryan to keep up the charade even at work. 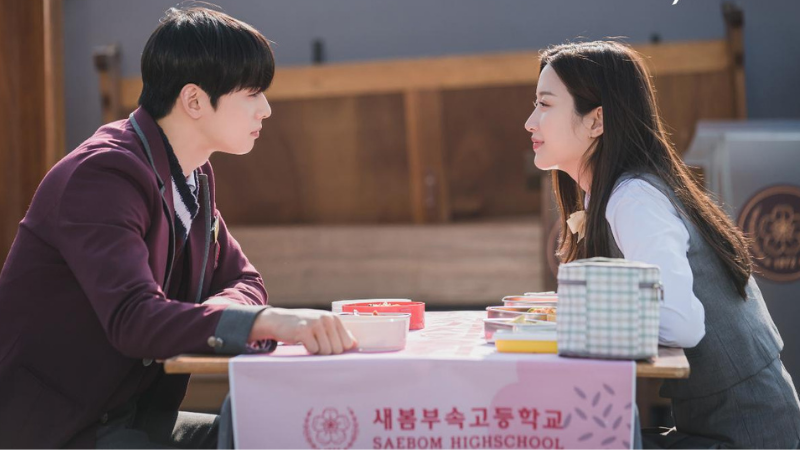 Love getting caught in the middle of a good ol’ love triangle? Let Cha Eun-woo, Moon Ga-young, and Hwang In-youp set your heart aflutter in True Beauty, a K-drama romcom based on the eponymous webtoon.

After years of getting bullied for being “ugly,” Lim Joo-kyung binge-watches beauty tutorial after beauty tutorial and becomes a makeup guru. She gets a fresh start at a new school, where thanks to her expert makeup skills, she is known as one of the prettiest girls in class.

She steals the hearts of not one, but two of the most popular boys in school: the broody yet attractive Lee Su-ho; and Han Seo-joon, the bad boy with a heart of gold, who also happens to be Su-ho’s ex-best friend. The burning question is this — which one of them sees her beyond her looks and likes her for her true beauty?

Nevertheless stars “son of Netflix” Song Kang and Han So-hee, who you may already know from The World of the Married.

Based on a webtoon (South Koreans do love their webtoons!) of the same name, the series focuses on a more modern and “realistic” take on romance between two art majors at university. Yu Na-bi is cynical about love due to a past relationship, but is still open to dating nevertheless. She soon meets Park Jae-eon, a flirty bad boy who thinks dating is a total waste of time.

There’s an instant, palpable attraction between the two — and they soon end up in a friends-with-benefits situation. Will their story end in a full-on romance, or will someone end up getting their heart broken?

Now, which of these kilig K-dramas do you plan to watch (or re-watch)? Surely, no one depicts romance as sweetly as the South Koreans do — and we’re absolutely living for it! If your fave K-drama romcoms aren’t on this list, we’d love to hear your recommendations in the comments section!

All images credited to IMDb.