Your Next Travel Goal: Top 10 Nature Adventures in SOX You Have to Try

Soccsksargen (Region 12) — or SOX, for short — is the southernmost region of the Philippines.  It’s known for many things: the home province of world-renowned Filipino boxer Manny Pacquiao, the tuna capital of the country, and the land of the T’boli dream weavers, among others. But only a few know that SOX also offers some of the most amazing tourist destinations in the Philippines. If you’re looking for a good adrenaline rush, then let the top 10 nature adventures in SOX be your next travel goal.

A volcano crater lake found on the rough terrain of Mt Belingoy, Lake Holon has always been a top choice for wandering adventurers thanks to its unique landscapes. But there’s more to it than just being an extremely Instagrammable destination that hosts many outdoor activities.

The 304-hectare tranquil lake in South Cotabato holds a storied history. As members of the local T’boli tribe will tell you, Lake Holon bore witness to tragedies and conflicts before it became a tourist hotspot. It was once an environmental liability rather than an ecotourism wonder. The lake is also said to be guarded by mountain gods and goddesses now called the Lake Holon Guardians. Stories of unseen forces and unearthly activities within the vicinity of the mountain are still narrated by the locals to this day.

What you’ll see at Lake Holon

Every week, hundreds brave unpredictable weather along the tiring trail just to marvel at its beauty. Is it all worth it? The weekly foot traffic and buzz about Holon prove that it truly is.

Trekking to Mt Belingoy’s summit takes about six hours via the Barangay Tbolok trail. From the top, the sunset is amazing. Being there at sunrise, on the other hand, means that you’ll get to witness the sun’s golden rays peeking from the skyline and slowly reflecting upon Sarangani Bay in the southeast. The sight is magical, to say the least. Clear skies may even reveal Mt Apo in the Davao region from afar, Mt Matutum in Tupi, and Mt Melibato in T’boli.

The most visited of Lake Holon’s three campsites is the main camp that can hold up to 200 campers at once. Go fishing in the lake or simply bask in nature’s glory under the stars and once day breaks.

Lake Agco is a unique and popular destination at the foot of Mt Apo in Kidapawan City. It’s considered a sacred place by the Manobo tribe and is frequented by tourists because of its hot and warm pools. Around the steaming sulfur lake are thick forests with diverse flora and fauna, making its surroundings cool and comfortable.

Other exciting things you can find in the area are the mud pool (which makes for a very relaxing treat!), a small waterfall with ice-cold waters, and a natural Jacuzzi that’s perfect for some well-deserved R&R.

Dare to fly in Sarangani with a paragliding adventure you won’t forget. Once you’re up in the air, you’ll be rewarded with a breathtaking view of Sarangani Bay. Because of its ideal terrain and good wind all year round, the fly site in Safi Ranch in Maasim Town — just about 20 minutes away from General Santos City — has been identified as one of the best sites for paragliding in the country. It’s a must-do in the area!

4. Go river tubing in the waters of Pangi 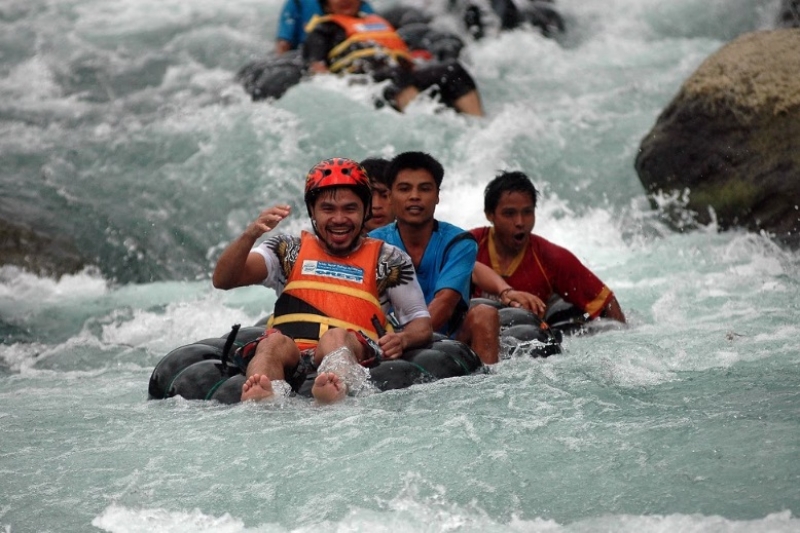 Another outdoor activity one should experience in Sarangani is the 1.6-kilometre River Tubing Adventure in New La Union, Maitum. Navigate Pangi River, one of the cleanest rivers in the country, with an inflatable tube and experience the thrilling rapids and drops. A well-trained river guide will be with you to manoeuvre the tube for your safety. If you’re up for a thrilling experience (and aren’t afraid to get wet!), river tubing along the strong currents of Pangi should definitely be on your list.

5. Get soaked at Asik-Asik Falls

Asik-Asik Falls in Alamada, Cotabato Province is arguably the most beautiful in this side of the world. This is mainly because of its unique curtain-like formation and its immense size. Found beneath the ravines and surrounded by balding mountains, it is truly a hidden gem.

Asik-Asik is 60 metres high and spans up to 120 metres wide, which is why even professional landscape photographers find it a challenge to capture the beauty of the roaring falls. The walls from which the waters emerge are decorated by hanging bushes and vines. No doubt Asik-Asik is nature’s work of art — with its scenery, freshwater spewing from the natural walls, and the surrounding greenery.

For the people of Barangay Dado, Asik-Asik falls is considered mystical. They believe there is an unseen force that guards the place and that its water can dispel diseases. This invites even more visitors to come and try their luck for its supposed healing power.

Experts believe that Asik-Asik could have been there for thousands of years. A series of volcanic activities around Mt Ragang, an active stratovolcano settled on the boundaries of North Cotabato and Lanao del Sur and part of the Central Mindanao Arc, formed the ravine that serves as the falls’ walls.

Gateways to Asik-Asik waterfalls include Kidapawan City (if coming from Davao area) and Tacurong City (if coming from General Santos City, Koronadal City Area, or Cotabato City). Vans and buses travel to these routes so transportation will be no issue. From Alamada town proper, makeshift motorcycle rides called habal-habal can take tourists straight to Asik-Asik Falls. With the recent developments in the road network going to the falls, cars and vans can already reach the spacious parking lot in the entrance area.

Mt Matutum, the highest peak in Central Mindanao next to Mt Apo, is presently surrounded by pineapple, corn, and banana plantations. On its foot lies Barangay Linan, where a Tarsier Sanctuary is being developed for wildlife conservation and ecotourism. The adjacent Miasong, Kablon, and Acmonan villages serve as vegetable and fruit baskets of South Cotabato. Vast plantations, including cut-flower, are operating on volcanic soil in the Mount Matutum Protected Landscape. Clearly, conquering Mt Matutum is a feat, but exploring its surrounding areas will make for an experience that’s one for the books!

7. Hop from one white sand beach to the next in Glan

Across Sarangani Bay in the eastern part of the province is the town of Glan. It has one of the most pronounced vestiges of colonial influence in the entire region, as seen through the remaining American period houses that dot its centre.

Being a coastal town, Glan also boasts of thick mangrove forests and long stretches of white sand beaches such as Gumasa Beach, which hosts the annual SarBay Festival. This festival is the largest beach party in Mindanao and gathers around 100,000 beachgoers yearly. Other events held along the Gumasa coastline are the Lubilubi Festival and Mahin Fest.

Travel trivia: Did you know that there is an expatriate Indonesian population in Glan? This adds to the vibrant mix of cultural influences in the region.

8. Take a ride on the wild side at Baras Bird Sanctuary

In Tacurong City, the amazing Baras Bird Sanctuary has fascinated visitors of all ages — bird enthusiasts or not. The 2.5-hectare park has attracted thousands of endemic and migratory birds for 20 years now. Diverse species of herons, egrets, cuckoos, kingfishers, and the elusive Glossy Ibis can be spotted flying, eating, or nesting over hundreds of trees that cover most of the sanctuary. The bird phenomenon can only mean that the locality lies on the flight path of bird migration. Tacurong City is, in fact, strategically located in the middle of SOX, sitting at the crossroads of the Davao – Cotabato – General Santos Highways.

A learning centre has also been set up in the park, thanks to the generosity of the Malana family, who owns the property. With the assistance of the city government, Baras Bird Sanctuary is a well-protected paradise for colourful flora and fauna.

9. Explore the wonders of Lake Sebu 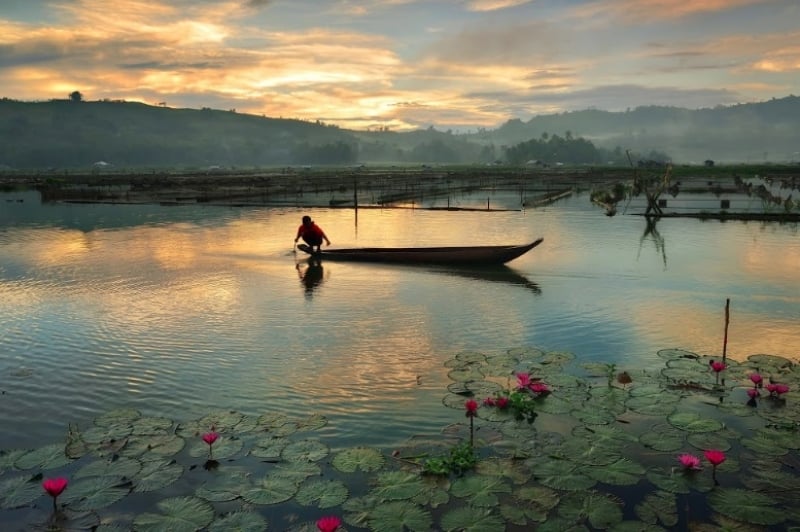 The town of Lake Sebu has been quite well-known, especially for the T’boli people and their culture. Their practices, songs, and dances have remained despite the pressures of modern living. Most notable of these is the weaving of T’nalak, the fabric woven by the T’boli dream weavers.

The late Lang Dulay was the face of T’nalak weaving in Lake Sebu. She was awarded the Gawad Manlilikha ng Bayan or National Living Treasure Award in 1998 and was instrumental in the current popularity of T’nalak and T’boli culture in general.

Lake Sebu’s attractions also include the lake from which the town got its name. It is a tranquil and picturesque body of water teeming with tilapia and the endearing lotus flower. The Seven Falls with its thrilling zip line is also popular among local and foreign tourists.

Travel tip: Take the Lake Sebu Specialties Food Tour! It is a single origin cultural tour package that allows tourists to enjoy the sights and activities while feasting on the local culinary fare.

10. Discover the secrets of Lagbasan Cave in Sultan Kudarat

Lagbasan Cave is one of the most spectacular caves in Sen. Ninoy Aquino, Sultan Kudarat. It’s an otherworldly wonderland that is only revealed by light. Lagbasan Cave has a unique interior, with amazing formations often likened to animals and various shapes.

Be warned, though, that Lagbasan Cave isn’t for the faint of heart. The cave entrance measures a mere three by six feet, which means that some parts may not be as spacious as one would like it to be. In fact, to enter the cave and slowly descend to its main chamber, visitors will have to crawl through the entrance. The views that lie ahead are truly rewarding, though. Many experts laud Lagbasan Cave’s world-class formations and some even tout it as one of the most well-preserved wonders of the Philippines.

There you have it — the best nature adventures in SOX. Without a doubt, more treasures await in Central Mindanao. So what are you waiting for? It’s high time to book a trip to the SOX region! Don’t forget to post your photos and tag us on Instagram.

For more information, contact Department of Tourism Region 12 at 083 520-1274 or visit the Treasures of SOX Official Facebook page.

Previous ArticleFlying to Lukla Airport in Nepal, the Most Dangerous Airport in the World
Next Article10 Signs You And Your Partner Should Travel Together Soon