With the overwhelming presence of mountain villages and baroque structures, the beauty of Austria is almost reminiscent of a medieval fairytale. Its grandeur has brought tourists to flock to this landlocked country whenever possible, making it among the top destinations for years. For those of us used to a tropical setting, Austria can be among the most enchanting places in the world.

It’s no surprise why many people choose to see Austria. Vienna, the country’s capital, has magnificent palaces and jaw-dropping musical history. The hills of Salzburg are alive — as we see in The Sound of Music. Innsbruck, also known as Austria’s Capital of the Alps, is a winter wonderland. The charm of these towns has definitely made noise in our travel community. But among them, a peerless cultural gem lies in quietude.

At the heart of Europe lies Dachstein Salzkammergut, a region overflowing with the natural and cultural treasures of Austria. In 1997, UNESCO dubbed it as a World Heritage Region for its scenic landscapes, spectacular mountain formations and crystalline lakes. The region is composed of four neighbourhoods – Bad Goisern, Gosau, Hallstatt and Obertraun – and breathtaking spectacles sprawl across them all. But, Dachstein Salzkammergut is more than just a view. Nestled in the centre of these wonders is the richness of its culture and traditions which the locals have preserved and developed through the years. Read on to uncover the activities lying about in the treasure troves of Dachstein Salzkammergut.

Perhaps the name “King Dachstein” was coined because of how the Dachstein Mountain majestically towers into the sky. With its glacial peaks, the mountain glistens all year round. To fully witness the magnificence of King Dachstein, go up the Five Fingers viewing platform in Dachstein Krippenstein. The picturesque view makes it one of the most popular destinations in the area. Five Fingers represent the five platforms from which you can view Dachstein Mountain and the other marvels that surround it. To get to any point, mountain gondolas are available throughout the region.

At the foot of the mountain, you’ll find the idyllic Lake Gosau. Set apart from other bodies of water in the world, Lake Gosau has stayed conserved well enough for its crystal clear water to remain suitable for drinking. Not only could humans benefit from this gift of nature, numerous species of fish also thrive in the purity of this lake.

Aside from viewing Dachstein Mountain from afar, travellers are also free to explore the massif up close. Varied hiking routes that lead through meadows and mountain pastures allow people to observe the area from different points of view. Rustic wooden huts also scatter across the trail so hikers can take a break while appreciating the picturesque scenery.

The Giant Ice Cave — a labyrinth of enchanting crystals 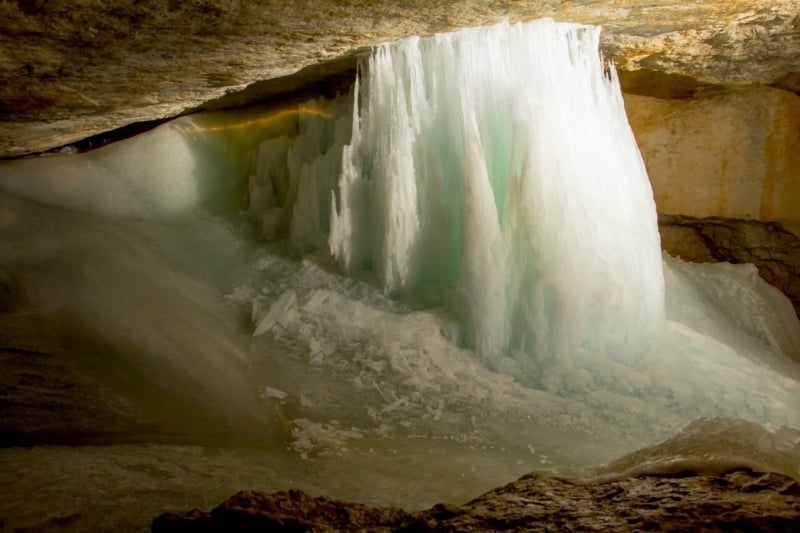 Dachstein Mountain is full of magic. While it’s beautiful from a far off view, trekking and exploring the Giant Ice Cave will let you experience its charm through a unique perspective.

Just above the Trauntal Valley, the Giant Ice Cave resides as a mystical labyrinth open to travellers of all kinds. Inside the ice cave, you’ll see astounding ice sculptures formed by years of water seeping from the Dachstein plateau into the small cracks of the cave. With the changing seasons in Austria, the melting and freezing of the icicles create a harmonious balance that will stun everyone.

As the heart of travel is rooted in learning new things about places, the beating core of Dachstein lies within the UNESCO World Heritage town of Hallstatt. Certainly one of Europe’s cultural highlights, the world acknowledges Hallstatt for its cultural history. Albeit small in size, this town will leave one of the biggest impacts in your journey. Even with just glancing through the town, you’ll already find out so much about their culture.

Across the village, you’ll see classical houses lined up against one another. These houses are considered traditional Hallstatt homes, which were built tall and narrow to fit into the small space in the town. Let your eyes feast on the colourful architecture that contrasts the lush greens of the salt mountain and the glassy clarity of the lake.

Right above Hallstatt, you’ll find the oldest salt mines in the world. The Hallstatt salt mines are operational until today, and their notability makes it a relevant addition to any itinerary. There’s so much to learn here, which is why it’s highly recommended to visit the salt mines with an official guided tour to maximise the trip.

Undoubtedly, one of the best platforms to witness the beauty of Hallstatt is through the Hallstatt Skywalk World Heritage View. The viewing platform floats 360 metres above sea level and extends to 12 metres from the mountainside, allowing you to see Hallstatt from different angles.

To know more about the culture of Hallstatt, there are many more sights you can explore. Follow the footprints of the Illyrians, Celts, and Romans as you visit the World Heritage Museum. You can also cosy up in the cafés at the market square, or tour the historic Catholic Church of Hallstatt.

Authentic handicrafts at the Hand.Werk.Haus

Beyond its natural wonders, Dachstein Salzkammergut has a distinct way of life. You can see the evidence of its rich culture in the consistency of the locals using traditional products to date. Even when Dirndls and leather trousers have been around long enough to be museums displays, locals still wear them daily. For this, the world recognises Dachstein for maintaining its strong identity.

Along with traditional art in the form of music and fashion, residents also celebrates local craftsmanship in Dachstein. At the heart of Bad Goisern sits the Hand.Werk.Haus, the epitome of the Dachstein-style promotion of beautifully curated handicrafts. Featuring art exhibitions, handicraft shops, and various craftsmanship events, Hand.Werk.Haus commits to preserve the original standards of their traditional handicrafts.

Having high value for cultural identity, the members of the Hand.Werk.Haus also see to it that their traditions are passed down to the next generations. With this, the Hand.Werk.Haus represents every craftsman in Salzkammergut who works hard in order to keep the city’s beautiful culture relevant throughout the ages. To them, culture does not only belong to museums. The Dachstein Salzkammergut culture is alive; hence, it is a valuable entity for local domestic economy and personal creativity.

From Singapore, the easiest way to get to the Dachstein Mountains is by flying to Salzburg, Austria. Fly via a 15-hour flight with Singapore Airlines. From there, you can take the bus to Bad Ischl, and then get on the train to Hallstatt. This trip will take approximately two hours.

Tip: If you rent a car from Salzburg to Hallstatt, your travel time could be cut in half.

The trip going to Dachstein Salzkammergut isn’t easy, especially for travellers coming from Southeast Asia. But, like uncovering treasure troves, the value in the experiences this cultural gem holds will surely be worth your journey.

Brought to you by Austrian National Tourist Office (ANTO) and Dachstein Salzkammergut.

Previous ArticleChristmas Songs that Will Make You Miss the Philippines
Next ArticleA Traveller's Wishlist: 20 Gift Ideas for a Wanderlust Christmas