A Davao and Samal Island itinerary for the family is an incredible opportunity to bond over its attractions and learn more about the second biggest city in the Philippines. This is exactly what we did when my family and I flew to Mindanao. My mother, in particular, loves the city, having had numerous work trips there. She’s been wanting to bring us to Davao with her, and years later, her dream finally came true.

Personally, I didn’t know what to expect in our Davao and Samal Island itinerary, but I promised myself to eat a lot of seafood when going there. When mom returned home from one of her trips for work in Davao, she brought us a big box of fresh seafood. She told us that the King City of the South offers fresh and cheap seafood like no other. Now that we had an opportunity to visit the city, I made sure to eat as much tuna panga as possible!

Our plane arrived at Davao Airport at around 10am. Since we booked a transient house in Sasa, a barangay near the local airport, our cab ride to our rental took only a few minutes. It was also a pleasant experience: Taxi drivers in Davao are known for their supposed honesty, and I can now confirm this. Passengers receive complaint forms from airport authorities, allowing us to report any kind of scam or abuse we may experience during the trip.

Because of our early flight, we decided to sleep in for four hours and pushed our lunch to 3pm. Since the unit had a smart TV, I also found the time to watch the new TWICE music video (lol). After resting, we headed to one of my mom’s favourite restaurants in Davao, which was, fortunately, near our rental.

Marina Tuna Restaurant is a premiere seafood restaurant in Davao — you can tell by their celebrity photo wall, which features some of the biggest names in Philippine showbiz and politics. However, once the restaurant serves your orders, you will discover that the only real and undeniable star is the food.

The dishes in Marina Tuna are, in a word, heavenly. Apart from its firm but tender meat, their tuna panga has a beautiful marinade that effortlessly enhances the fish’s flavour. Meanwhile, their sinigang na tuna belly is light, but every sip of its broth is flavourful. In this restaurant, I also had the best singubang pusit I’ve ever tasted. Their tuna sashimi could have been better, but fortunately, their blue marlin kilawin made up for it. We tied the entire meal with some decadent sikwate. This hearty meal was a great introduction to the gastronomic influences of Davao; it definitely exceeded our expectations.

Inside the busy Roxas Night Market 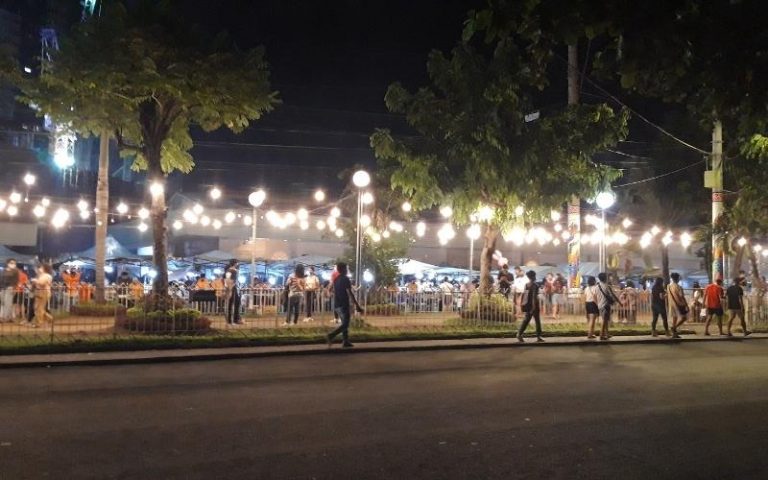 We went back to our room after the late lunch to freshen up for Roxas Night Market. Unlike other street bazaars, this local market is patrolled by a team of military or police officers. So, don’t be surprised if uniformed personnel inspect you upon entry.

At the Roxas Night Market, you will find stalls that offer different kinds of food: barbecues, deep-fried snacks, fresh-cut fruits, eccentric desserts —name it, they have it. Unfortunately, we didn’t dine here because there were too many people and no vacant tables.

Instead, we walked towards Sta. Ana Avenue and ended up in Penong’s, a local franchise that specialises in sinugba. We ordered their bestsellers: chicken and pork barbecue and their seafood basket, which includes their seafood platter (shrimp, scallops, squid, and blue marlin), sinigang na lapu-lapu, and tuna panga. The food was decent, but the tuna panga was a bit overcooked, making the meat tougher to eat.

Day 2: Exploring the King City of the South within a day

For our second day in Davao City, Dad opted to rent a private driver to save time. I envisioned a walkable city, but we were staying in a secluded area, so having a vehicle was necessary. Also, I found out that weekend traffic in Davao resembles that of Manila and Cebu. So if you’re planning to visit on a holiday, prepare for long rides! 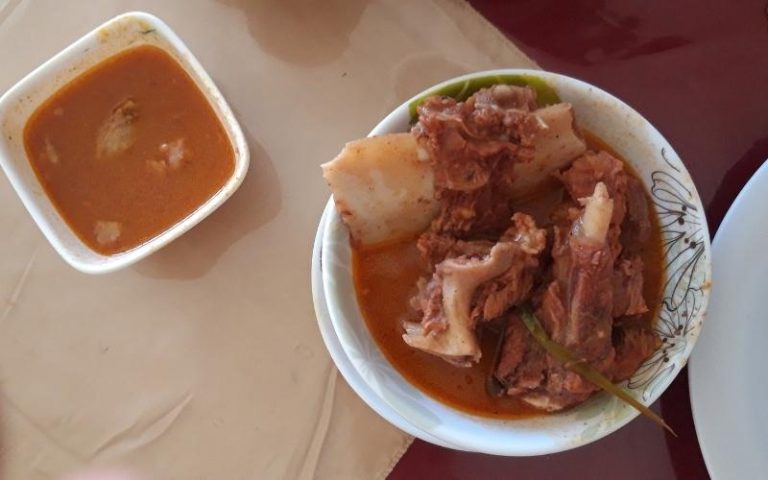 Brunch was the first agenda of the day. Dad had been wondering about the hype behind Bulcachong, so we had our first meal in this restaurant. Turns out, bulcachong is also the name of the dish this restaurant is famous for. It’s similar to bulalo, but instead of beef, bulcachong has carabao meat instead. It also has ginger, giving the broth a slight tart taste. I found the dish underwhelming, as the broth wasn’t as flavourful as I expected. But, I did love the carabao meat; I thought it was more tender than normal beef. Overall, it’s a great comfort meal that is also quite affordable, but don’t expect something sophisticated out of it.

Bulcachong stays open up until 3am because, according to patrons, a lot of drunk people find relief through their eponymous broth. 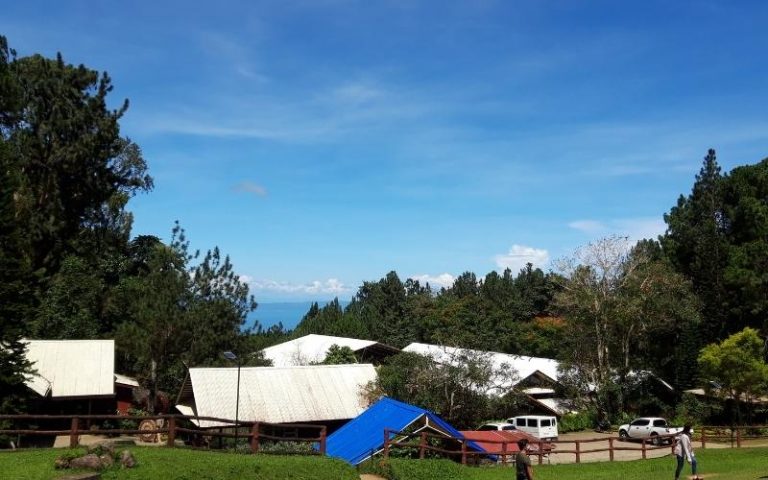 After Bulcachong, we had a long drive ahead of us to get to Eden Nature Park and Resort. This mountain reserve has a lot of activities for people who want to reconnect with nature. We paid the entrance to explore their aviary, a few gardens, and cabins. The entrance fee also covers snacks and a drink. We spent about two hours in the park until it was time to go to our next destination. 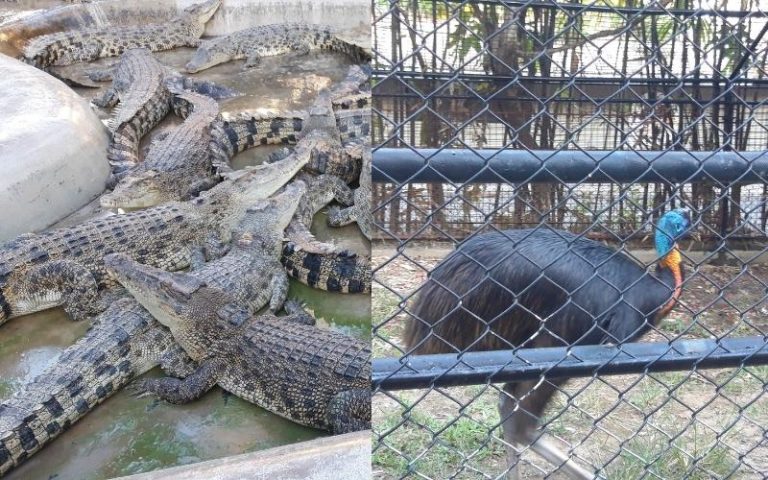 We had another long drive, this time to the Davao Crocodile Park and Zoo. My siblings are fond of zoos, so we were excited to visit this destination. From the name itself, there were a lot of politicians — I mean — crocodiles housed in the park. I did not expect, however, that apart from the crocodiles, other different animals were also held captive here. They had a tiger, a lion and lioness, an orangutan, wallabies, and a cassowary. I would have wanted to try the crocodile sisig and lechon, but the in-house restaurant wasn’t open that day. 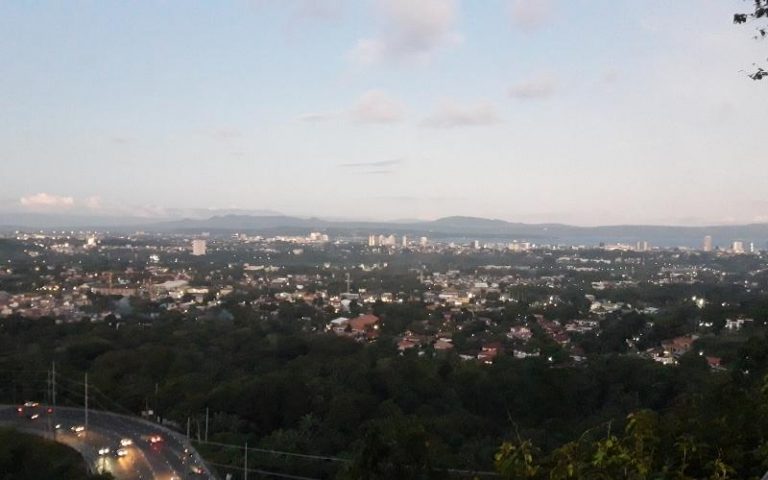 Eden Eco Park and Davao Crocodile Park were our prioritised destinations during the day since our driver recommended going to the other attractions at night. By the time we left the crocodile park, it was almost sunset. Seeing that evening was close, we went to Vista View Bar and Restaurant for a picture-perfect view of Metro Davao. We then drove to Jack’s Ridge, a food hub that was once the headquarters of the Japanese Army during World War II. After taking a few pictures, we went back to the city for dinner. 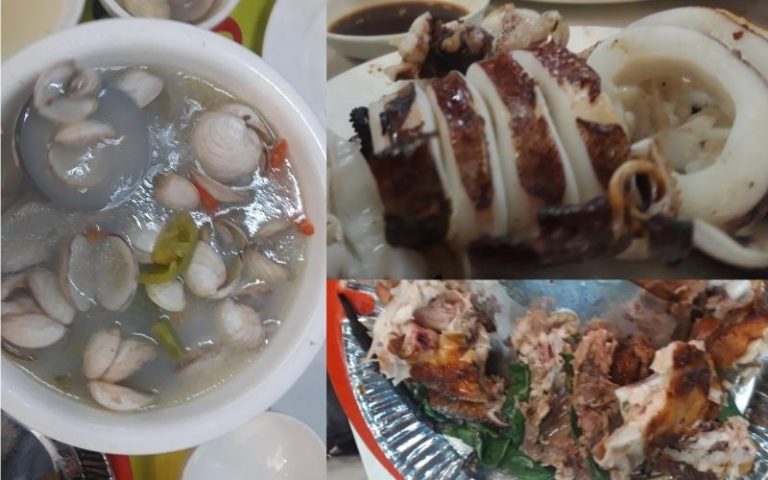 For dinner, dad wanted to taste roasted native chicken by Conching’s. I was sceptical of this restaurant at first. I’m in Davao, I want seafood!, I thought. Turns out, Conching’s also serves tuna panga and sinugbang pusit. The restaurant also introduced me to a delicious soup that I will never forget: the imbao. Apparently, this soup is made from mangrove clams; it is one of the most flavourful broths I have ever tasted. Their native chicken, while lacking meat, has a consistently delicious taste in every bite. As for their tuna panga and sinugbang pusit, it was the second best that we’ve had the entire trip. It was so delicious that we ate the leftovers when we returned to our room. I will never doubt Conching’s ever again!

Since this is a family vacation in Davao and Samal Island, pasalubong shopping is to be expected. Apart from seafood, Davao is also famous for its fruits. The best place to buy fruit in Davao would be Bankerohan Market. My dad and brother handled pomelo and durian shopping, as well as tablea chocolates. During their shopping, they managed to see the local eatery made famous by former president of the Philippines Rodrigo Duterte. They ordered bulalo and balbacua for takeout. After slurping up the dishes in our rental, we understood their fame. 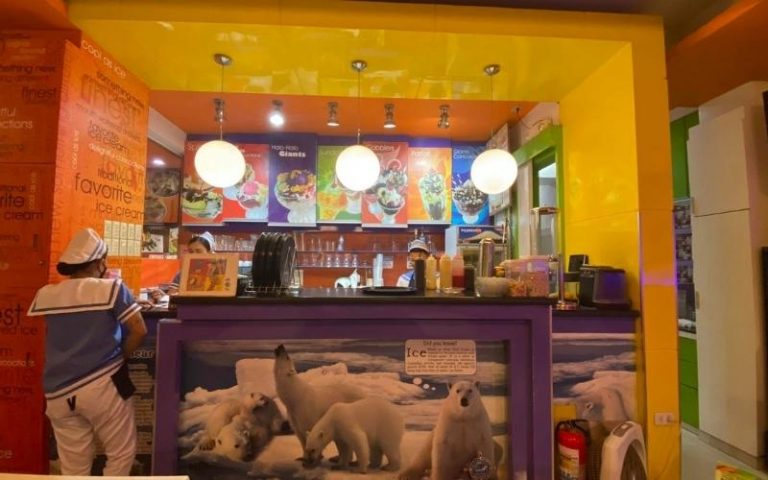 We concluded the day with cool desserts at Ice Giants, which sits across the same Penong’s branch we ate in on our first day. It seems like the south has a knack for creating magnificent iced desserts since their creations reminded me of halo-halo from Sol’s in Cebu.

Day 3: Crossing over to Samal Island 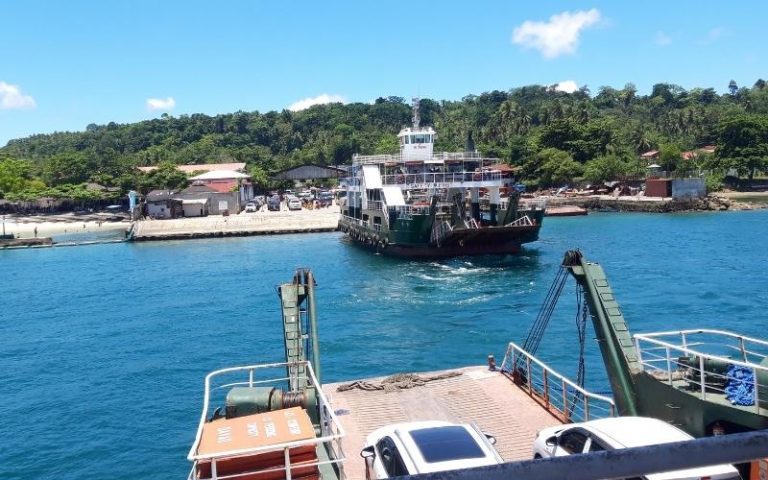 From Sasa Wharf, reaching Samal Island takes roughly 15 to 20 minutes. Since it was a long weekend, many passengers lined up to board the ferries. Some private vehicles were also waiting in the queue.

Upon alighting from the ferry, we hired a tricycle to take us to our rental. After unloading luggage, my dad went to the seaside public market to buy ingredients so we could cook our meals inside the house. The ingredients are undoubtedly fresh off the sea!

Also read: 12 Stunning Villas in the Philippines Where You Can Stay Right on the Water

We headed to Samal Family Garden Resort in the late afternoon. I didn’t get to swim because I was tired, but I watched and waited for a gorgeous sunset. We left the resort and returned to the house for dinner. The house caretaker was kind enough to cook us inihaw na liempo, sinugbang pusit, and, of course, tuna panga while we were away on the beach. And as you can expect from fresh ingredients, the food was nourishing and flavourful. 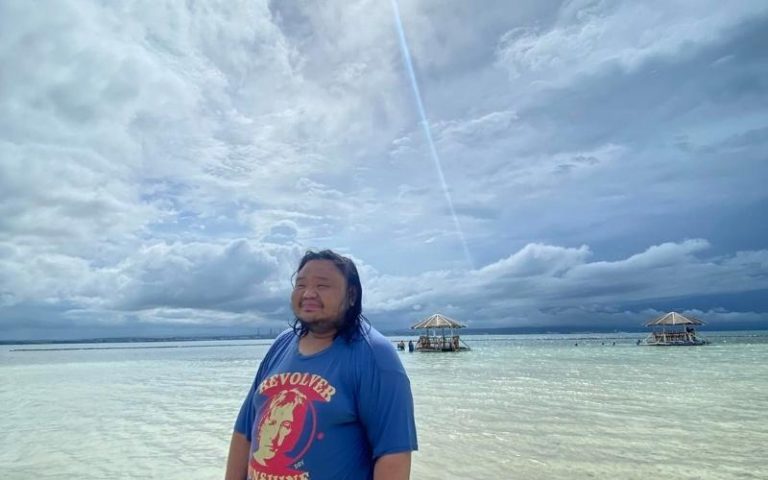 This particular day was hectic. Cavanico Il Mare was pretty far from our rental — more than 30 minutes away. It is one of the more developed resorts on Samal Island and is a bit pricier than Samal Family Garden Resort. I was excited to go to their beach, but no matter how far I went into the sea, the water was only up to my knees. The shore was also extremely rocky, and it was a painful experience when barefoot. Luckily, the resort had a pool where we stayed for about two or three hours until it was time to return. It was around 4pm when we returned to our unit.

You may have noticed the lack of food being mentioned. That’s because we barely ate on this day. We had no time to explore the rest of the island because the last trip from DavSam Wharf was at 5pm. So apart from hotdogs and eggs for breakfast, we didn’t have a decent meal that day because time was not on our side. We managed to reach Davao City at 6pm and we had to board by 7pm. We all then agreed to eat in a Jollibee once in Manila instead.

Apart from my seafood cravings, I had no idea what to do in a Davao and Samal Island itinerary. But as I heard from a lot of friends and family who go to the city, it is fun-loving and peaceful with a surprisingly sophisticated palate for food. All the while, it also gave me a better profile, not just of Davao, but Mindanao itself. This is another testament that there is peace in the south. I trust my mother enough to visit other places in the south, and I’m glad that this is the first of many.

Previous Article23 Best Cafes in Manila for Coffee, Brunch, and Dessert
Next ArticleHow to Get a South Korean Tourist Visa for Philippine Passport Holders